RISING STARS SET TO COMPETE AT GIRLS’ U18 WORLD CHAMPIONSHIP

The future stars of international volleyball are ready to hit the court as the 2021 FIVB Girls’ U18 World Championship starts on Monday in Durango, Mexico, featuring 20 national teams from all five continents.

The biennial competition returns to Mexico for the first time since 2007, when the cities of Mexicali and Tijuana co-hosted the event. First played in 1989, the Girls’ U18 World Championship will complete its 17th edition this year.

The reigning champions are the United States, who triumphed in Egypt in 2019, downing two-time defending champions Italy in a dramatic five-set final. 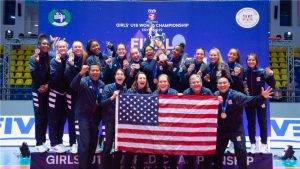 The Americans won the most recent edition of the event, two years ago, in Egypt

The tournament will be played across two venues and will go on from September 20-29, with the sixth day (September 25) a rest day between the conclusion of pool play and the start of the elimination round.

The FENADU Arena will host Pool A (Cameroon, Canada, Mexico, Poland and Serbia) and C (Nigeria, Puerto Rico, Romania, Thailand and the United States) while the Auditorio del Pueblo will set the stage for Pools B (Dominican Republic, Egypt, Italy, Peru and Turkey) and D (Argentina, Brazil, Bulgaria, Russia and Slovakia). 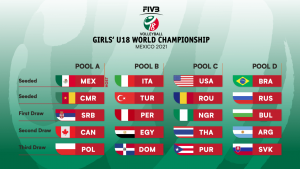 Pool play will be completed in five days in a single round robin system. The four best-ranked teams in each pool will move on to the Round of 16 while the fifth-placed teams in each of the four pools will compete in the playoff for the 17th to 20th places.

The Girls’ U18 World Championship has a strong tradition when it comes to presenting future volleyball stars to the world as several of the most successful players in the history of the sport have competed in the event. 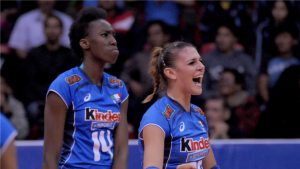 The 3,500-seat FENADU Arena and the 2,000-seat Auditorio del Pueblo will both be operating with limited capacity as part of the strict hygiene protocols implemented due to the coronavirus pandemic, but all matches will be streamed live on the Volleyball World YouTube Channel https://www.youtube.com/c/volleyballworld.