RONDINA AND PONS STEP UP FOR PHILIPPINES IN BORACAY OPEN

Boracay, Philippines, May 24, 2019 – Cherry Ann Rondina and Bernadeth Pons saved the day for the Philippines in the FIVB Beach Volleyball World Tour Boracay Open with a straight-set win against Japan, following the losses of their compatriots Maria Beatriz Tan/Floremel Rodriguez and Jackielyn Estoquia/Dhannylaine Mae Demontano on Friday.

Earlier, top seeds Eliza Chong and Lau Ee Shan of Singapore eluded Tan and Rodriguez in a tight three-setter (21-17, 13-21, 14-16) in Pool A and second seeds Brittany Kendall and Stefanie Wieler of Australia beat Estoquia and Demontano in straight sets (21-18, 21-14) in Pool B.

However, Rondina and Pons stepped up and gave the Philippines their first win in the Boracay Open with a straight-set (21-14, 21-8) triumph against the more experienced tandem of Shinako Tanaka and Miyuki Matsumura in Pool D.

“We really want to win this match and avenge the losses of the other Philippine teams today,” Pons said. “We are overwhelmed by the support of the crowd and they boosted our morale in this match.”

“I only had two days to prepare for this tournament but I believe that focusing on winning and thinking of good plays would help complement the great performance of my partner,” Rondina said. “When I was already on the court I was able to easily adjust on my game and that made it easier for me to play on deep sand.”

The women’s pool play matches will continue on Saturday starting at 7:00 local time. 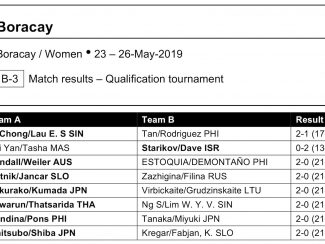 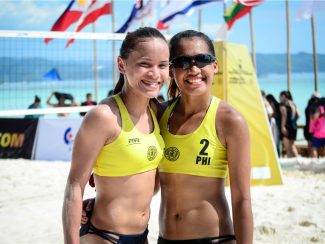