Ljubljana, July 5, 2019 – Cuba, Turkey, Belarus and hosts Slovenia are the semifinalists of the 2019 FIVB Men’s Volleyball Challenger Cup in Ljubljana. Tomorrow, they will continue their campaigns for a spot in the 2020 FIVB Volleyball Nations League.

The hosts Slovenia, who were the winners of Pool A will take on Belarus, while Cuba will face Turkey.

Slovenia and Turkey qualified to the decisive stage of the competition already on Thursday. After losing the first set today, the hosts bounced back, winning three sets in a row eventually closing the game 3-1 (23-25, 25-16, 25-15, 25-17) to defeat Turkey. The Slovenes dominated in attack with 52% (Turkey 43%), while Turkey handed the hosts 32 points on direct errors.

Toncek Stern contributed with 19 points for the hosts, while top scorer of Turkey Yigit Gulmezoglu had 16 to his name.

Both teams made many substitutions in their squads. “Our strategy was to play the first two sets with our starting six to save energy for tomorrow. We didn’t calculate who would be our opponents, now we know it’s Cuba and we are focusing on that game,” explained Arslan Eksi of Turkey.

Tine Urnaut, captain of Slovenia: ”This match was the first serious game of the tournament for us. Turkey played great defence in the first set and we had some troubles with side-out, despite good reception. Our side-out was not as good as it should be and that was the main reason we dropped the first set. Afterwards we improved our side-out, started to play smarter. We improved our service, making it more difficult for the opponent to play.”

Coach Alberto Giuliani said: “We played well in block and defence, we missed a few points to close the first set in our favour. Later, we played very well. Both teams made many changes in their line-ups thinking about tomorrow.”

The best scorer of the game was Marlon Yang Herrera of Cuba with 22 points (18 in attack, 3 in block and 1 in serve), followed by Miguel Lopez Castro with 20. On the other side of the net, Mostafa Abdelrahman tallied 10 points. 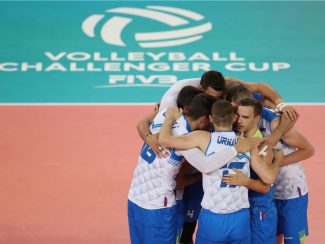