Bangkok, Thailand, August 29, 2020 – Shandong defeated Zhejiang (25-14, 25-18, 25-21) in the final match-day of Pool F in Qinhuangdao on Friday, rounding out the final four of the Chinese Men’s Volleyball League, a news release on xinhuanet.com said.

This year’s league sees eight teams divided into two groups to play in a round-robin format, with the top two finishers from each pool moving on to the semi-finals.

Zhejiang had already booked a berth in the last four before Friday’s game, sitting atop Pool F, two points ahead of second-placed Shandong, while Beijing and Fujian sat third and fourth respectively.

The victory sent Shandong atop Pool F, with Zhejiang slipping to second place.

Shandong’s comprehensive win forced last season’s runners-up Beijing out of the race for the title despite a 3-0 victory over Fujian.

In the semi-finals, Shandong will take on defending champions Shanghai, while Zhejiang face Jiangsu.

KENTARO TAKAHASHI: FORCE IN THE MIDDLE 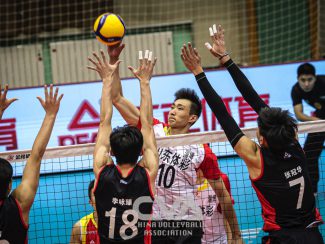