The pair win the men’s trials in Japan

The Japanese Volleyball Association has announced that Katsuhiro Shiratori and Yusuke ‘Gottsu’ Ishijima will represent the country in the men’s beach volleyball tournament of the Tokyo Olympics after they won the country’s Olympic trials on Sunday.

Seeded second in the six-team tournament that took place at Tachichi Beach, in Tokyo, Shiratori and Ishijima their three matches without dropping sets. In the final, they downed fifth-seeded Kenji Shoji and Masato Kurasaka 2-0 (21-12, 21-6) to secure the right to represent Japan at the Olympics.

The pair played together in six FIVB Beach Volleyball World Tour events during the 2019 season and have a fifth-place finish in a one-star tournament in Knokke-Heist, Belgium, as their best result as a team. 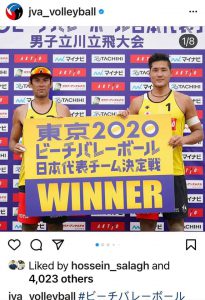 The 44-year-old Shiratori is one of the most successful players in Japanese beach volleyball history. He represented his country at both the Beijing 2008 and the London 2012 Olympics with former partner Kentaro Asahi, finishing ninth on the first occasion and 19th on the second. The Tokyo Games will be the 140th international event of his career.

“I’m really happy that we have won because I’ve prepared so much for this tournament,” he said. “I’ve been mostly playing at the national level recently, so to have another opportunity of playing against the best in the world on the top stage of the sport, I’m really looking forward to it. I’ll try and use my experience to help in our preparation.” 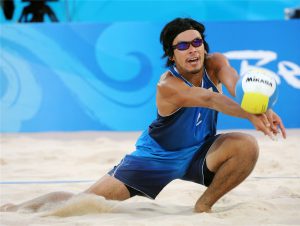 Shiratori digs during the Beijing 2008 Olympics

Shiratori’s career served as an inspiration for the 37-year-old Ishijima to start playing beach volleyball. A longtime member of the Japanese volleyball national team and a Beijing 2008 Olympian, he transitioned to the beach in 2017 looking for another opportunity to compete at the Games.

“I watched a match of Shiratori and Asahi in Beijing and thought that beach volleyball was an interesting sport and could be a nice challenge for me,” he explained. “I’ve been very fortunate to have Shiratori helping in the process.”

The host country berth for the women’s Olympic tournament was awarded to Miki Ishii and Megumi Murakami, who won the Japanese women’ trials at the end of May. 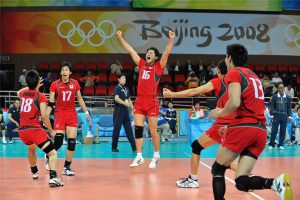