Ljubljana, July 6, 2019 – Cuba and Slovenia will clash in the final of the 2019 FIVB Men’s Challenger Cup in Ljubljana after defeating Turkey and Belarus, respectively. The winner will grab the one and only available spot in the 2020 FIVB Volleyball Nations League, replacing relegated Portugal.

The hosts Slovenia after losing the first set found their way to the final, eventually beating Belarus 3-1 (21-25, 27-25, 25-20, 25-18). Belarus played diminished as their top scorer Radzivon Miskevich was not able to perform due to a knee injury. However, the team led by Tine Urnaut went all out in front of their fans.

Pavel Kuklinski was the top scorer of the match with 20 points to his name (18 from attack).

“Again our side-out was not at a good level. We lost too many points in a row, the opponent was serving very well, so it was difficult for us. Then, we started to play better and during the game we improved our serve and block, we rose the level of our game. We came here to play in the final and now we are expecting a tough match against Cuba. We will do everything to win,” said Tine Urnaut after the game.

Alberto Giuliani, head coach of Slovenia: “Belarus played very well in the first and second set, especially in serve and attack. Miskevich was not on the court, but also their other spiker was very good. After the first set we performed much better on serve and in block and we managed to win this very important game for us.”

Siarhei Busel emphasized that playing without Miskevich was challenging: “We did not play with our full strength, some of our players were missing, during the match we lost Radzivon Miskevich as well. This was a big problem for us. In the first and second set both teams were close, but later Slovenia were better.”

The encounter between Cuba and Turkey was also a battle of players – Jesus Herrera Jamie was the top scorer of the match with 26 points (22 in attack);on other side of the net Adis Lagumdzija got 20.

Jesus Herrera Jaime, opposite of Cuba: “We delivered a great performance and proved that we can compete at this level, even against better teams. Although I scored the most points I had the support of the whole team. We can play even better and tomorrow we will go for another win.”

The head coach of Cuba praised his players. “We have a really young team, our average age is 21. We still miss some experience, but the guys have a promising future ahead. The match was a tough one, Turkey are a good team, but I am happy that my players started the match with a great desire to play. I am satisfied with the outcome and I’m already looking forward to the final,” said Nicolas Vives. 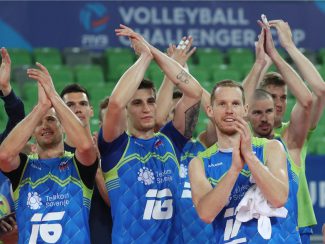