Hamburg, Germany, July 6, 2019 – With five of the eight players competing in the men’s final four participating in their first World Championships, Sunday’s finale here at Am Rothenbaum Stadium will feature the predicted No. 3-ranked team on the FIVB World Tour from Russia against an unexpected German pair at the US$1-million event.

Third-seeded Viacheslav Krasilnikov/Oleg Stoyanovskiy of Russia and 12th-seeded Julius Thole/Clemens Wickler of Germany advanced to the gold medal match at the 12th edition of FIVB World Championships presented by compdirect & ALDI Nord by winning a pair of matches here Saturday.

With more than 13,000 beach volleyball fans viewing both the center and side courts at Rothenbaum Stadium Saturday, the 22-year-old Thole and 24-year old Wickler advanced to their second FIVB World Tour gold match in their first-ever World Championship appearance by defeating pairs from the United States and Norway.

Krasilnikov and the 22-year-old Stoyanovskiy, the Nanjing 2014 Youth Olympic champion, gained their ticket to the finals Sunday by defeating pairs from Italy and the United States. Krasilnikov placed third at the 2017 World Championships in Vienna with Nikita Liamin.

“What a moment,” said Thole about defeating both the Americans and Norwegian. “Playing against Dalhausser is special since he has won every award possible on the World Tour. And the Norwegians are the best team in the world, and we used the crowd to our advantage to win that match.”

Wickler added “what a great feeling to play Sunday for the World Championship trophy with our crowd behind us.  It will be a tough match as the Russians are very strong and have defeated us twice earlier this year in the Netherlands and Qatar.”

With the World Championships being the Russian’s ninth event together and fourth appearance in a FIVB World Tour gold medal match, Krasilnikov and Stoyanovskiy posted a January gold medal win over the Germans in The Hague and a pool play victory in March at Doha.

“We’ve done a great job here so far and I can’t tell how happy I am that we’re in the final”, said Stoyanovskiy after the match. “This match was a great test for us. We lost control of the game in the second set and that frustrated us in the end, but we regained our focus for the third and we’re getting into this final with a lot of confidence because we saw that we can take the game back anytime it happens.”

Krasilnikov said he was “thrilled that I’ll have another medal this time and that it will be better than the bronze Nikita and I won in Vienna,  It’s hard to describe this feeling right now, it’s just amazing, and I hope I can feel it again tomorrow after the final.” 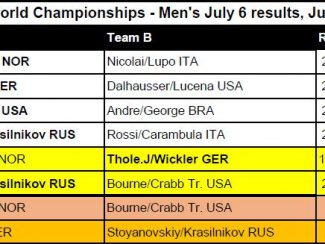 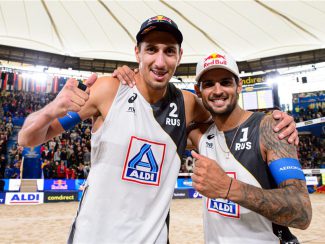