“We all played heroes in this match because we played like a team to win this match,” Liu Yanhan said. “I’m very happy to play in this team and see all our hard work pay off with this win.”

Liu Yanhan and Gong scored 23 and 20 points, respectively, to lead China to the four-set win, while Ebrar Karakurt had a strong scoring performance by finishing with 31 points.

In the first set, Turkey held the lead briefly until Gong Xiangyu got involved on offence and defence for the Chinese side. The hosts managed to gain a two-point lead at 21-19, but Turkey fought back to level the score. In the succeeding plays, Liu Yan got her team to gain another two-point lead, but Turkey still had some firepower left to score. Gong scored on a powerful swing from the right flank and ended the long rally with another spike to give China the win 25-23.

China carried over their momentum in the second set and built a comfortable lead courtesy of Gong and Liu Yanhan’s powerful spikes. On the other side, Karakurt was Turkey’s lone bright spot on offence as her teammates were neutralised. At 21-14, Hande Baladin’s serve went out of bounds, then Gong put China to within two points from closing the set. An attack slide by Wang Yuanyuan and an attack error by Karakurt gave China the 2-0 lead in the match at 25-15.

China continued to rally and push their opponents back in the third set, as Liu Yanhan hit wilfully against the Turkish blockers. China held on to a slim lead until Kubra Caliskan stepped into the service line. The Turkish middle blocker put pressure on her serve, allowing her side to gain the advantage. Baladin’s block and Karakurt’s spike completed the comeback at 25-20.

By the fourth set, it was a spike-off between Karakurt and Liu Yanhan. Liu Xiaotong scored an ace and attack to give lead 14-12 and Liu Yanhan’s heroics, including an adjustment on the spike through mid-air, rewarded China with a four-point cushion into the technical timeout. China kept scoring, but Akman was once again at the service line that earned Turkey some points to cut down the lead, but Liu Yanhan scored from the back row and Liu Xiaotong scored on an attack to seal the bronze medal victory 25-21. 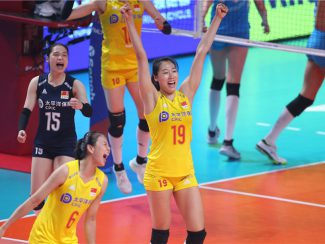