Maoming, China, May 9, 2019 – Top four seeds in the women’s event lived up to billings to get their campaign at the 2019 Asian Senior Beach Volleyball Championships off to winning start on Thursday, with local hopefuls Wang Fan and Xia Xinyi struggling to bag first victory. Chinese Wang Fan/Xia Xinyi, gold medallists at the last year’s Asian Games in Indonesia and winners at the last month’s Asian Tour Samila Open in Songkhla, Thailand, had a little problems in claiming the first set win 21-16 in their first match against Francesca Kirwan/Olivia MacDonald in Pool A. However, the New Zealanders fought back bravely in the second set, proving a tough nut to crack for Wang and Xia as they pushed the Chinese duo to deuce. With the greater experience, Wang and Xia survived a scare from the tough rivals to end their challenge 2-0 (21-16 22-20) to next take on Nicole Laird/Becchara Palmer of Australia.

Laird and Palmer, gold medallists at the 2019 FIVB World Tour 3-Star in Sydney in March, on Thursday handed Kiwis Kirwan/MacDonald the day’s first loss as the Australian duo spent only 31 minutes in thrashing the rivals 2-0 (21-15 21-18). The top-flight competitions serves as a final test for qualified Asian players ahead of their tougher task at the 2019 FIVB Beach Volleyball World Championships in Hamburg, Germany from June 28 to July 7. The double-gender Championships continue through Sunday, as Chinese women’s players hope high to smash Australia’s dreams of making it three in a row in the Asian meet. Australians Louise Bawden/Taliqua Clancy won gold in 2017 in Songkhla, Thailand and Clancy captured back-to-back title as she partnered Mariafe Artacho Del Solar to reign supreme. 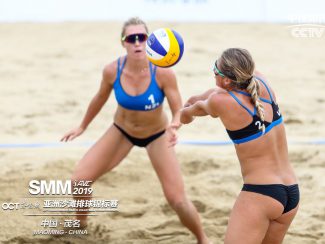 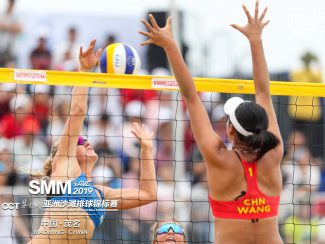