Besides winning the gold medal, the Monarchs also earned the right as the Philippine representative to the 2022 Asian Men’s Club Volleyball Championship in Urmia, Iran, from May 15-22.

The Dasmariñas City-based team finished the tournament undefeated in five matches and what a way for the Monarchs to snatch the title with a stunner over a heavily-favored Aguilas side.

“Well, I’m very happy that we are champions against a team composed mostly of national players,” Team Dasmariñas coach Norman Miguel said. “We’re very proud that we were successful in this tournament. This is our goal.”

The Monarchs were very much in control in the fourth set with setter Cian Silang giving his club an 18-11 cushion on an ace. They were never threatened after that.

Looking like goners in the early goings, the Monarchs rallied from an 11-17 and 20-23 second-set deficit behind Madz Gampong to level the match at one set apiece.

Picking up where they left off in the second set, the Monarchs sustained their solid plays on both ends to post a 2-1 set advantage.

Mark Calado, who led the Monarchs with 18 kills, was named the tournament Most Valuable Player to go with his First Outside Hitter award.

“Of course, we’re very proud of him. He really worked hard for it. He deserves it,” said Miguel of Calado.

Rosales and Jayvee Sumagaysay were a force to reckon with in the net and combined for 12 of the Monarchs’ 16 blocks in the title clincher.

“I’m overwhelmed,” said Sumagaysay, who took home the First Best Middle Blocker award. “Last night, I told my teammates that now that we’re here, we should dream big. We are not here just to compete. We are here to win.”

F2 Logistics emerged as the first women’s winners of the Champion’s League. 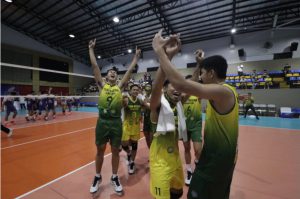 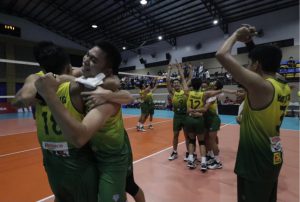