Manila, Philippines, December 5, 2019 – Hot favourites Thailand will take on Vietnam in their last preliminary match on Saturday to decide which team will come out on top, but both sides have already sealed their final spots at the 30th Southeast Asian Games women’s volleyball competition at Philsports Arena in Pasig City. Perennial SEA Games champions Thailand, which claimed silver medal at this year’s Asian Senior Women’s Championship in Seoul, Korea, took it all in stride in front of an appreciative crowd on Thursday when the defending and 13-time winners put it past gallant Philippines in hard-fought three-setter 25-16 25-22 34-32.

In the 30th edition of the SEA Games, the biennial multi-sport extravaganza contested among athletes from Southeast Asia, only four teams are vying for the top honour in the round-robin competition. However, with Indonesia and hosts Philippines going down two straight matches, unbeaten Thailand and Vietnam remain alive in contention for the crown. Thailand sent a strong roster to Manila with eight players joining the gold-winning team at the previous Games two years ago in Kuala Lumpur, Malaysia. Against hosts Philippines on Thursday, the Thai team fielded a formidable lineup which had beaten Indonesia in straight sets in their opening clash on December 3. 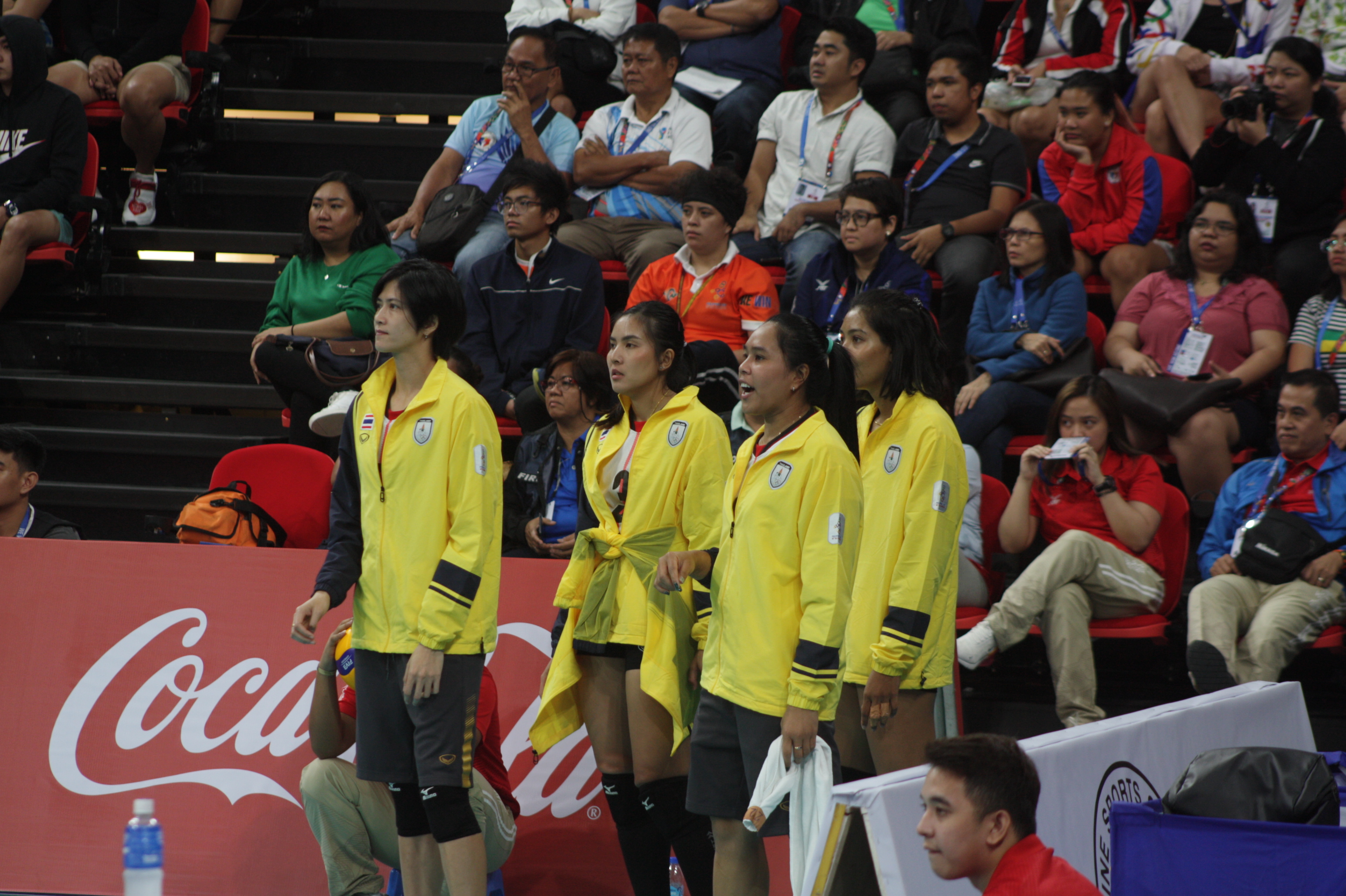 Thai coach Danai Sriwacharamaytakul has been experimenting with his lineup over the course of the first two sets and even allowed star spiker Pleumjit Thinkaow, powerful Onuma Sittirak and young talent Ajcharaporn Kongyot a break from all action entirely. Thailand clinched the first two sets 25-16 25-22 and still made a strong start in the third set. 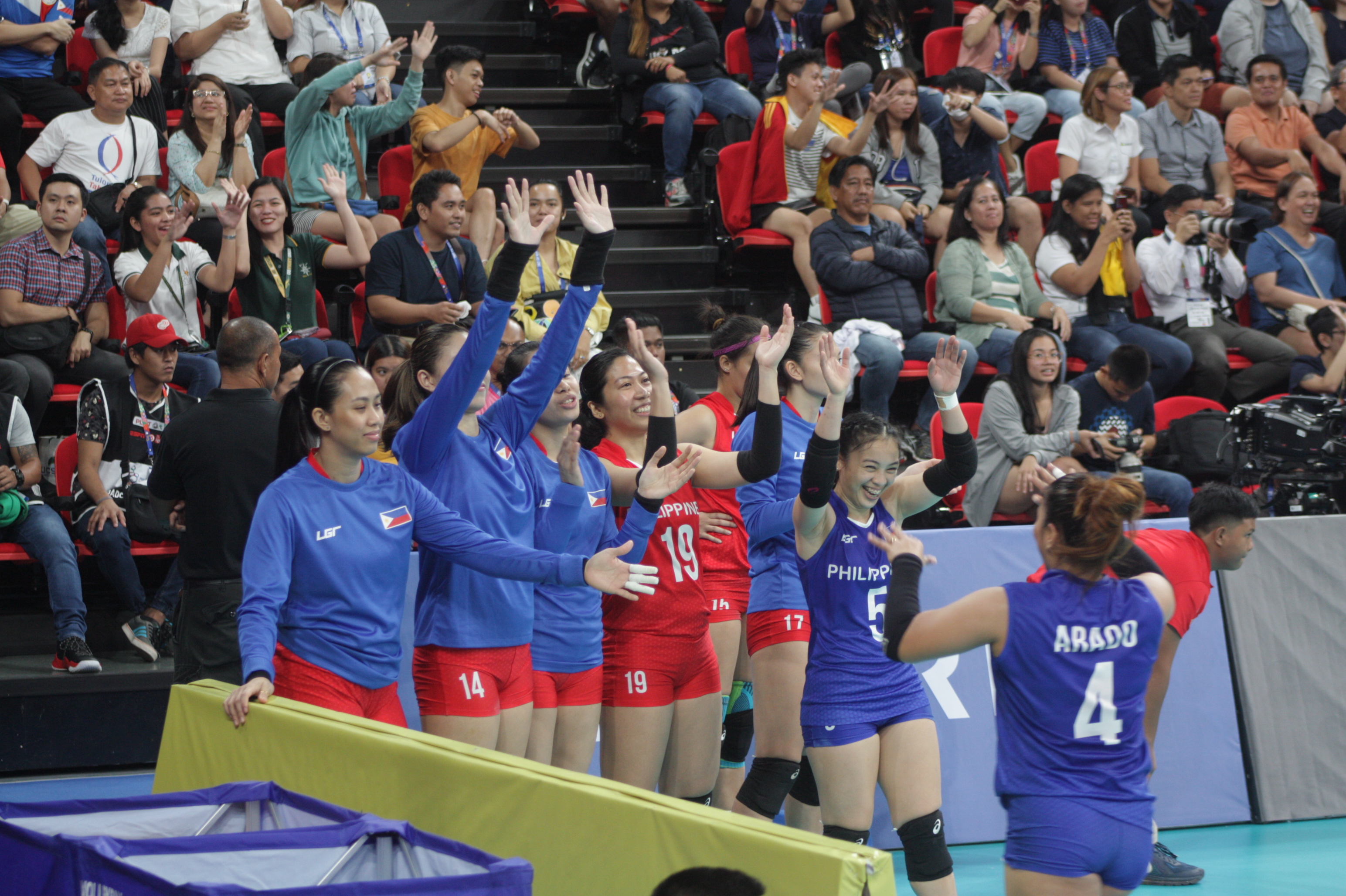 It was a tense set from the very first serve as Thailand looked to continue their domination, but Philippines turned things around to counter-attack well, with ace spiker Alyssa Valdez overpowering the taller blockers with her exceptional attacks. In some brilliant rallies, the host side came once again from behind and attacked from all corners in an effort of closing the deal as Valdez and Mylene Paat took an excellent offensive combination. 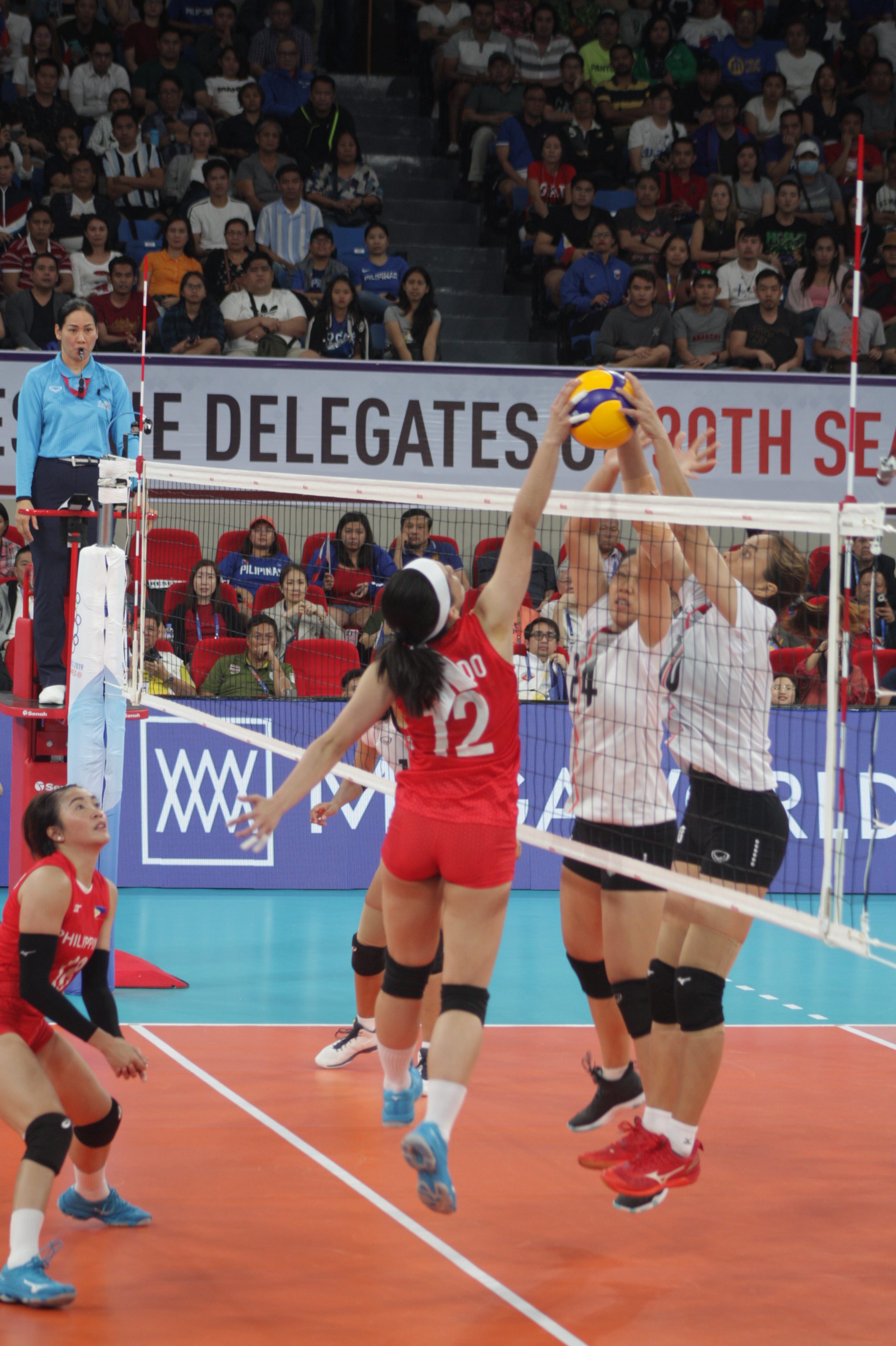 The leads changed hands for several times before Thailand put their acts together and played well under pressure. With the wind in their sails at home stretch, Thailand sealed the deal 34-32 after a long rally in the hotly-contested set and match. 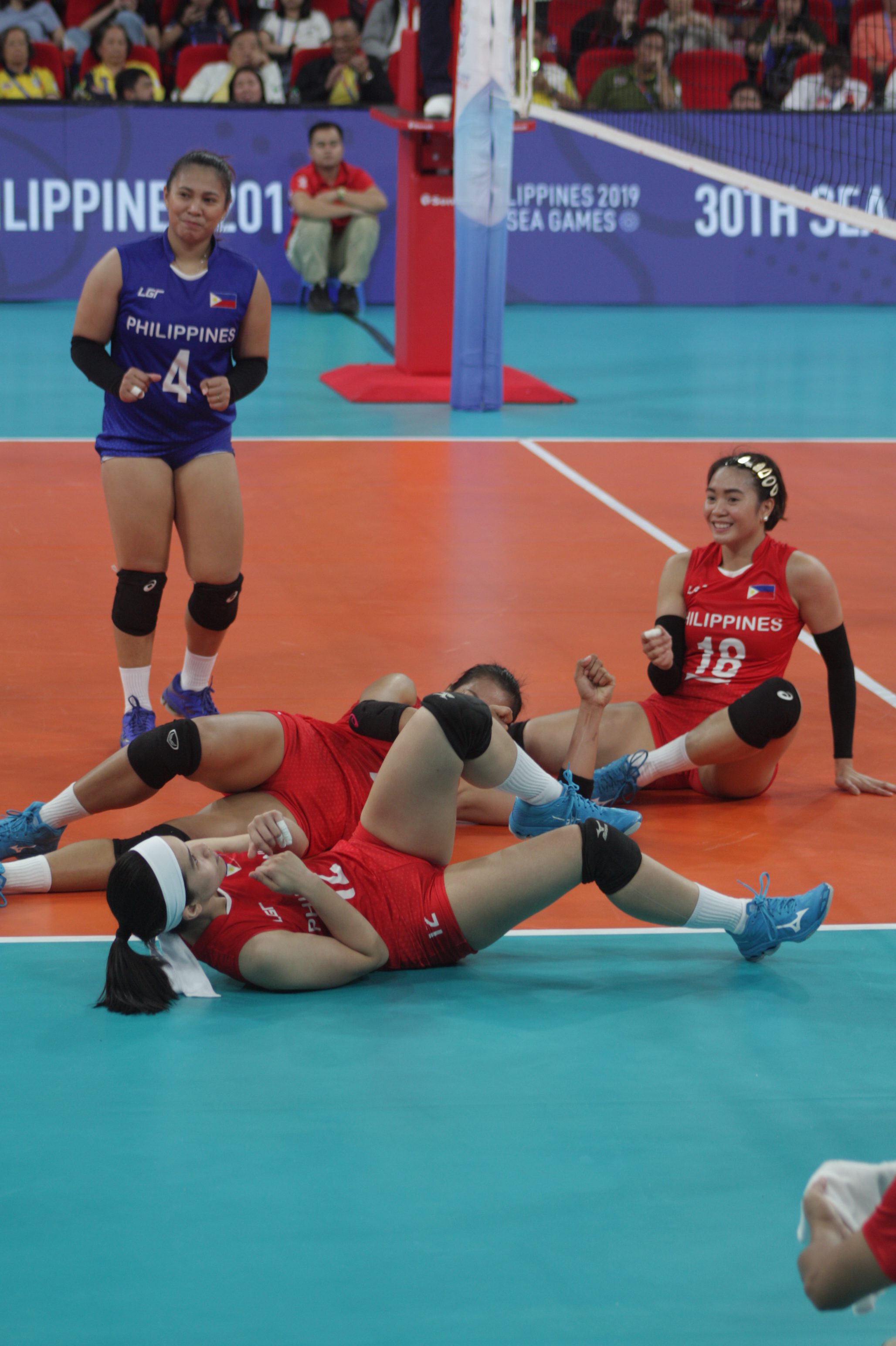 Pimpichaya Kokram chipped in with 19 points for Thailand including 17 attacks from 38 attempts, while Wilavan Apinyapong added 15 points including 14 attacks. Young Tichakorn Boonlert scored 8 points in this match including a team-leading 4 blocks. Alyssa Valdez topscored with 14 points from 12 attacks and 2 aces for Philippines.

Thailand continued their unbeaten streak and still have yet lost a single set to their rivals. Following the win, Thailand led the pack with 6 points from two straight wins. Hosts Philippines lost two matches in a row to have only one point. On Saturday, Thailand are due to take on Vietnam in their last preliminary match. Win or lose, both Thailand and Vietnam are assured of finishing top two after completion of the round-robin preliminaries and as a result, will set up a final clash on December 9.

Thailand had played Vietnam for 8 times in the final showdown of the SEA Games volleyball competition, commencing in 2001 in Kuala Lumpur, Malaysia, 2003 in Vietnam, 2005 in Philippines, 2007 in Thailand, 2009 in Laos, 2011 in Indonesia, 2013 in Myanmar and 2015 in Singapore. In the previous Games, Vietnam were edged 2-3 by Indonesia in the semi-finals to shatter their high hopes of making it to the final against Thailand for 9 times in a row.

Vietnam, which pulled off a hard-fought five-set win against the host side in their opening clash, still faced the similar situation in their second encounter on Thursday against Indonesia, silver medallists at the previous Games two years ago in Malaysia.

The match turned out to be a see-saw battle, with Indonesia taking the first set 25-20. Vietnam recovered to win the second set 25-14 before Indonesia made amends to clinch the third set 25-19, but the Vietnamese did not want to surrender easily as they bounced back to win the fourth set 25-18 and maintained their form to win tie-breaker 15-6 and match.

Vietnam had 4 points from two straight wins, while Indonesia, playing without their key player Aprilia Manganang, who has been reportedly suffering from an injury, claimed one point from two losses in a row.

All the women’s teams will have a rest day on Friday and will get back to the competition venue the following day, with Thailand playing their last preliminary match against Vietnam and Indonesia going up against hosts Philippines. 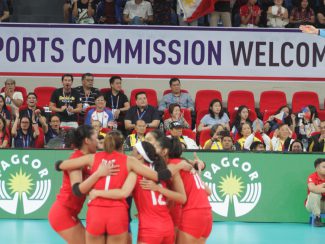 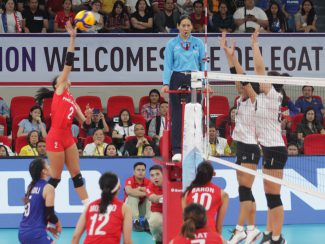 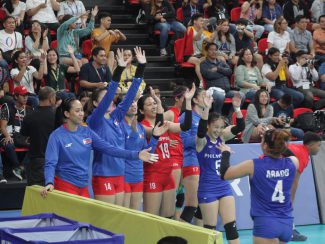 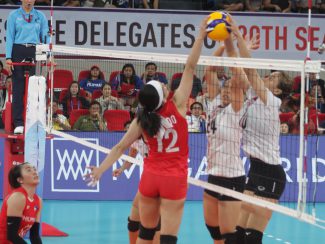 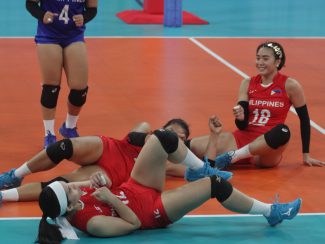 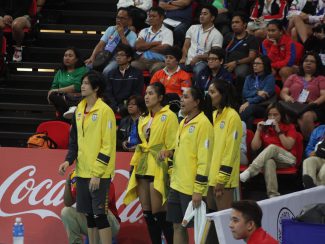 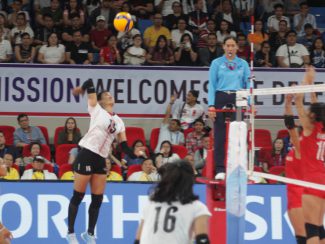 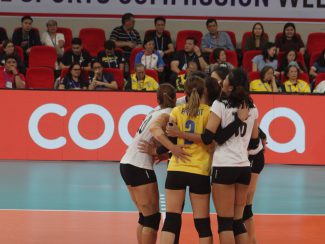 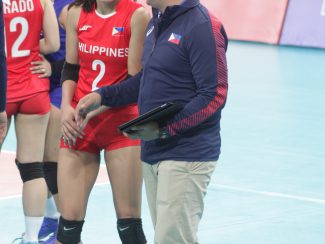 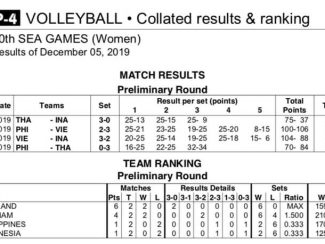