Against India, of which the stunning 2-3 defeat to Hong Kong, China on Tuesday completely dashed their high hopes of claiming their historic AVC Women’s Challenge Cup, Thailand lost the first set 23-25, took the next two sets 25-12, 25-22, dropped the fourth set 18-25 and won the closely-contested decider 15-13 to the delight of cheering home fans.

Following the dramatic win, Thailand, represented by their U20 squad prepping for the forthcoming 21st Asian Women’s U20 Championship in Kazakhstan between July 4 and 11, 2022, successfully retained their Princess Cup title. 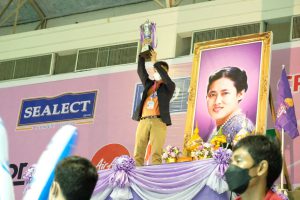 At the previous edition four years ago at the same competition site here, Thailand stunned India in straight sets in the final showdown of the “20th Princess Cup” 2018 Southeast Asian Girls’ U17 Championship to capture the prestigious Princess Cup. This year, Thailand played host to the 3rd AVC Women’s Challenge Cup and decided to merge the 21st Princess Cup to the Challenge Cup, with only five teams (Hong Kong China, Singapore, India, Uzbekistan and Malaysia) playing a single round-robin competition. The team with the highest accumulated points will be crowned champions. Regarding the Princess Cup tournament, all participating five teams will also take on Thailand. The best-ranked team will capture the prestigious Princess Cup. 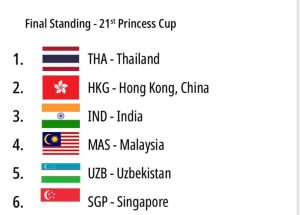 After completion of the single round-robin competition on Wednesday, hosts Thailand made a clean sweep of five matches to top the 21st Princess Cup standing with 13 points and capture the prestigious Cup. Hong Kong, China had 11 points from 4 wins against one loss to finish second, with India in third position with 11 points from 3 wins against 2 losses. 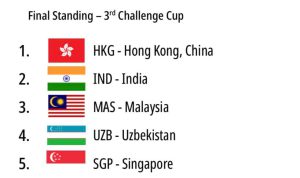 Meanwhile, Hong Kong, China stole the show on Wednesday after 3-0 (25-19, 25-10, 25-19) demolition of Uzbekistan. Following the sensational win, the Hong Kong girls swept all matches to go atop the 3rd AVC Women’s Challenge Cup standing with 11 points from 4 straight wins, followed by India with 10 points from 3 wins against one loss. 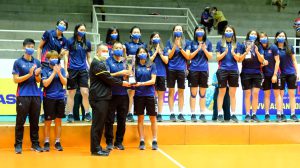 Uzbekistan had 4 points from one win against 3 losses to clinch the 4th spot, while Singapore lost four straight matches to finish bottom 5th place with no point awarded. 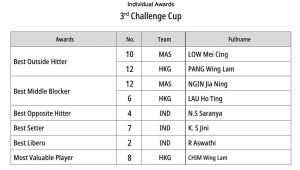 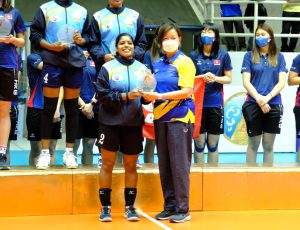