Tokyo 2020 Olympian and Gold Coast 2018 Commonwealth Games champion Damien Schumann announced October 11 that he will be retiring from professional sport.

Schumann, aged 33, made history in 2018 by winning gold in the first ever beach volleyball event at the Commonwealth Games, paired with Chris McHugh. Earlier this year the two players became the first Australian men’s team to qualify for the Olympic Games since Beijing 2008.

In his 11-year international career Schumann played in over 50 International Volleyball Federation (FIVB) World Tour events, winning two of them in Shepparton (2017) and Phnom Penh, Thailand (2020), both in partnership with McHugh. Schumann was also the Asian Champion in 2020 and Australian Champion on multiple occasions. He was ranked 18th in the world after the 2017 season, a result he considers one of his greatest achievements along with his Commonwealth Games success and Olympic qualification. 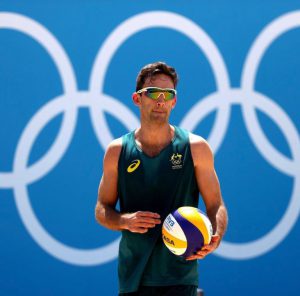 In announcing his retirement from beach volleyball, Schumann took the time to recognise the amazing support he received over the years from the volleyball community and the people who accompanied him along the way.

“I consider myself so lucky to have been in a position to give everything I had to the game I loved for so long,” he said.

“While there have been some big highs and big lows, I never would have got to experience any of them without the help of so many wonderful people.

“The kindness and support of the volleyball community at large over the last 18 years has been incredible. Finally, I can’t thank my wife Sarah enough for being there through thick and thin throughout the journey.”

Beach volleyball partner Chris McHugh, said Schumann is one of the toughest competitors anyone will ever meet on a court, and yet the most down to earth, positive and caring person in the beach volleyball community.

“Damien he is one of the true nice guys of our sport who I have been lucky enough to partner with for three and a half years,” McHugh said.

“He has worked extremely hard in his career. He has overcome a lot of adversity and has really put in the hard yards to compete for so long on the international stage.

“There is no one else you would rather have standing next to you going into battle on the biggest stage and we will forever be linked by our shared experiences along the journey to the Tokyo Olympic Games. I wish him all the best in the future for whatever that holds,” he said.

Volleyball Australia (VA) President Craig Carracher admitted he always felt very close to Schumann ever since in 2013, during the early days of his presidency, the athlete was the first one to openly approach him as he supported the efforts and the investment commenced in VA’s international campaign of activities that kicked off in that year.

“His demeanour, skill, commitment and focus has inspired so many on the court, and also those of us off the court, to be and to do better.  His Olympic qualification crowned an amazing career and I am thankful our sport has athletes like Damien.

“I trust he will continue to play an important role in our sport.  Thank you for the inspiration,” he said.

“His sporting journey has achieved great heights, but Damien’s greatest legacy will be his role as a great teammate,” Naismith said.

“He was always dependable on the court, showing competitive spirit, strong desire to compete against the biggest and best, an ability to move on to the next challenge swiftly, and a driving commitment to make any teammate he played with better, on and off the court.

“Thank you ‘Damo’, you will be missed” he said.
Beijing 2008 Olympian Andrew Schacht, who coached Schumann for his Tokyo campaign said he could not be more proud of the athlete and person he has seen Schumann become during their time working together.

“You rarely get to choose who you coach – I look back on the last five years working with Damien and feel extremely privileged that I was able to help him chase and achieve his dreams,” Schacht said.

“Damien is a genuinely good human who had an absolute passion to work every day and give his all to play with the best in the world.

“He made many people around him better, including myself,” he said.
His former coach, Haydn Ellis reflected on Damien’s incredible journey and his incredible work rate.

“Nothing that you see in Damien as a professional athlete is by chance. Damien built a vision in his mind of who he needed to become and threw his heart over the wall with his body following behind,” said Ellis.

“He built a playing style around his natural strengths and developed technical advances to help in areas where he was at a disadvantage. But most importantly, Damien took us, the Australian beach volleyball community, on a journey to the top.

“His appreciation and acknowledgement of all who have assisted and supported him and his love and passion for the game and the community around it has been felt by all,” he said.

In announcing his retirement, Schumann had a parting thought for all the young beach volleyball players who have been inspired by his career and perseverance in chasing his lifelong sporting dream of an Olympic participation.

“You might want something really bad, but there are never any guarantees,” he said.

“Work harder than you ever thought possible on your journey to give yourself a chance!

“This way, who knows, you might get there and at the very least you’ll have no regrets because you gave it everything.”