The Australian duo, who won gold at the Volleyball World Beach Pro Tour Challenge tournament at the Praia da Baia in Espinho, Portugal, their first victory on the 2022 Beach Pro Tour, struggled to beat Ishii/Mizoe 2-0 (29-27, 21-16) in an intense semifinal clash on Friday to set up the final clash with New Zealand’s Shaunna Polley/Alice Zeimann, who stunned Chinese Xia Xinyi/Lin Meimei 2-0 (21-19, 21-15) in the other semifinal encounter. As Artacho del Solar has her sights firmly set on her third Asian title here, Clancy has already captured five including three with her previous partner Louise Bawden in 2014 in Jinjiang, China, 2015 in Hong Kong and 2017 in Songkhla, Thailand. Kiwis Polley and Zeimann are chasing their dreams of sealing their unprecedented title in the Asian Senior Beach Volleyball Championships since they finished in fourth place last year in Phuket. 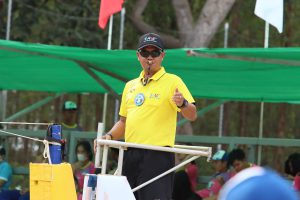 Clancy and Artacho del Solar, silver medallists at the Tokyo 2020 Olympics and the 2022 Commonwealth Games in Birmingham, have finished in the top ten in each of eight events they have played in so far this season and are currently ranked third in the FIVB World Rankings. Clancy and Artacho del Solar got the day off to a brilliant start after 2-0 (21-15, 21-11) demolition of Japan’s Akiko Hasegawa/Yurika Sakaguchi in the quarterfinals. The Australian duo later pulled off a thrilling 2-0 (29-27, 21-16) win against another Japanese pairing, Ishii/Mizoe, silver medallists at the previous edition last year in Phuket and the last week’s AVC Beach Tour Roi Et Open at the same competition site here, in the do-or-die semifinals. Polley and Zeimann, who had a disappointing outing at the last week’s Roi Et Open here following their joint fifth finish, have already proved that they are a strong team to be reckoned with in this topflight championship as they stunned reigning Asian champions and local hopefuls Worapeerachayakorn Kongphopsarutawadee/Tarawadee Naraphornrapat 2-0 (21-16, 24-22) in the morning quarterfinals. After that, the Kiwis stormed on their remarkable run to rout China’s Xia Xinyi/Lin Meimei 2-0 (21-19, 21-15) in the afteroon semifinals. Xia had also looked forward to her third Asian title here this time, but things turned sour for her as she left the venue here in Roi Et with head low in disappointment. Xia had won her first Asian gold medal in 2016 in Sydney with her partner Xue Chen. She seized her second Asian title in 2020 with partner Wang Fan in Udon Thani, Thailand. This time, she came with a new partner in Lin Meimei. Xia also claimed Asian Games titles for consecutive two times comprising 2014 in Incheon, Korea with partner Ma Yuanyuan and 2018 in Jakarta-Palembang, Indonesia with partner Wang Fan. On Saturday, September 17, the final day of the top-tier championship, China’s Xia Xinyi/Lin Meimei will take on Japan’s Miki Ishii/Sayaka Mizoe in the third-place playoff clash at 3pm local time to fight for bronze medal.