DAY 3 WRAPUP
Tehran, Iran, September 15, 2019 – Australia, Japan, China and Korea stayed unbeaten to top their pools at the end of the pool round-robin preliminaries of the SMM 20th Asian Senior Men’s Volleyball Championship on Sunday, with the Volleyroos stunning hosts Iran with an exceptional comeback win in their last preliminary match. 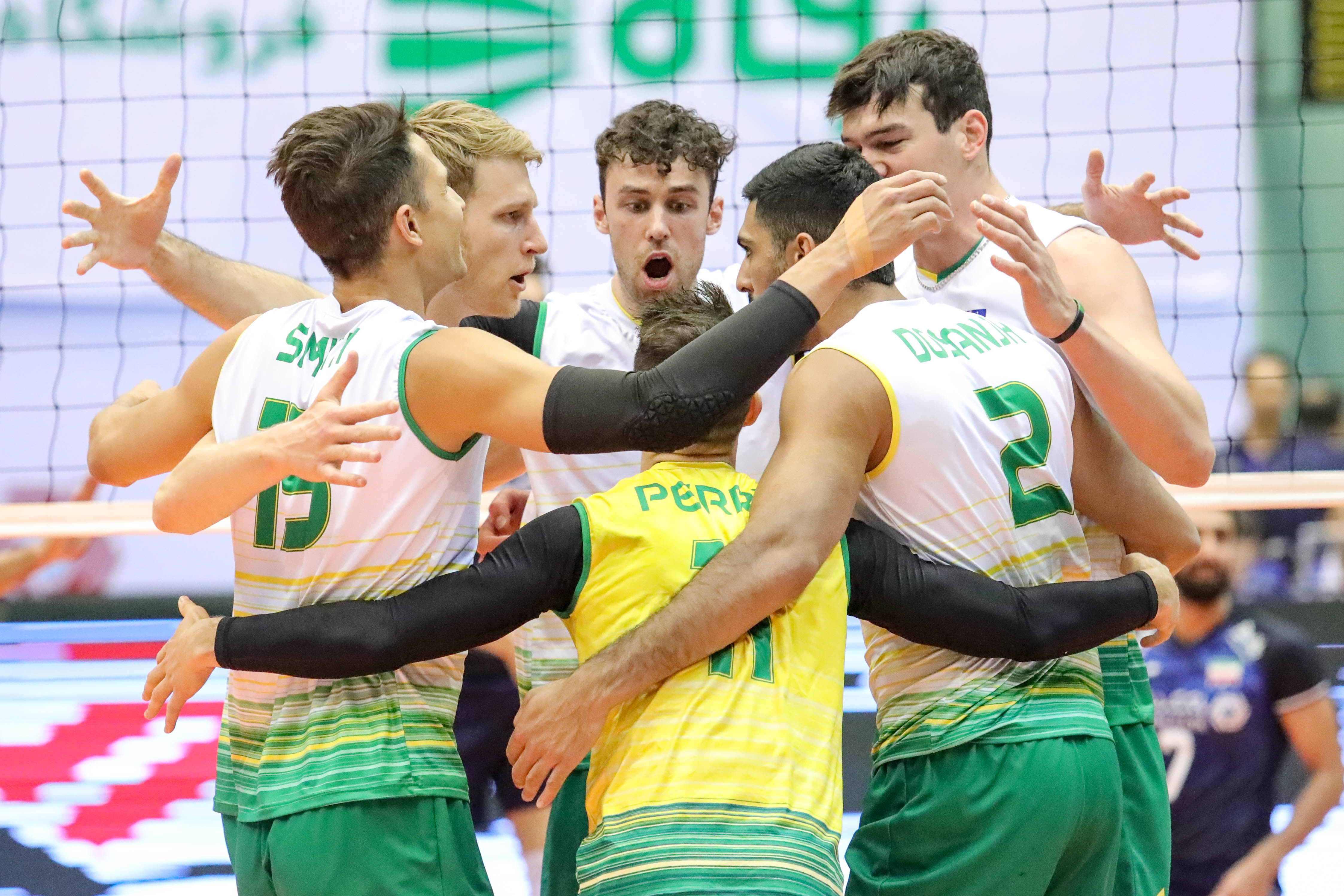 Hosts Iran, Japan, Chinese Taipei, China, India, Korea and Pakistan have been confirmed as the top 8 teams and all of them, except Tokyo 2020 hosts Japan, will also be eligible for the AVC Continental Men’s Olympic Qualification Tournament in Jiangmen, China from January 7 to 12, 2020. As a result, with only seven teams confirmed for their places in the Olympic Qualification Tournament in China, one more team among those contesting the 9th-16th playoffs will become a lucky loser to make the 8-team cut for the January meet. 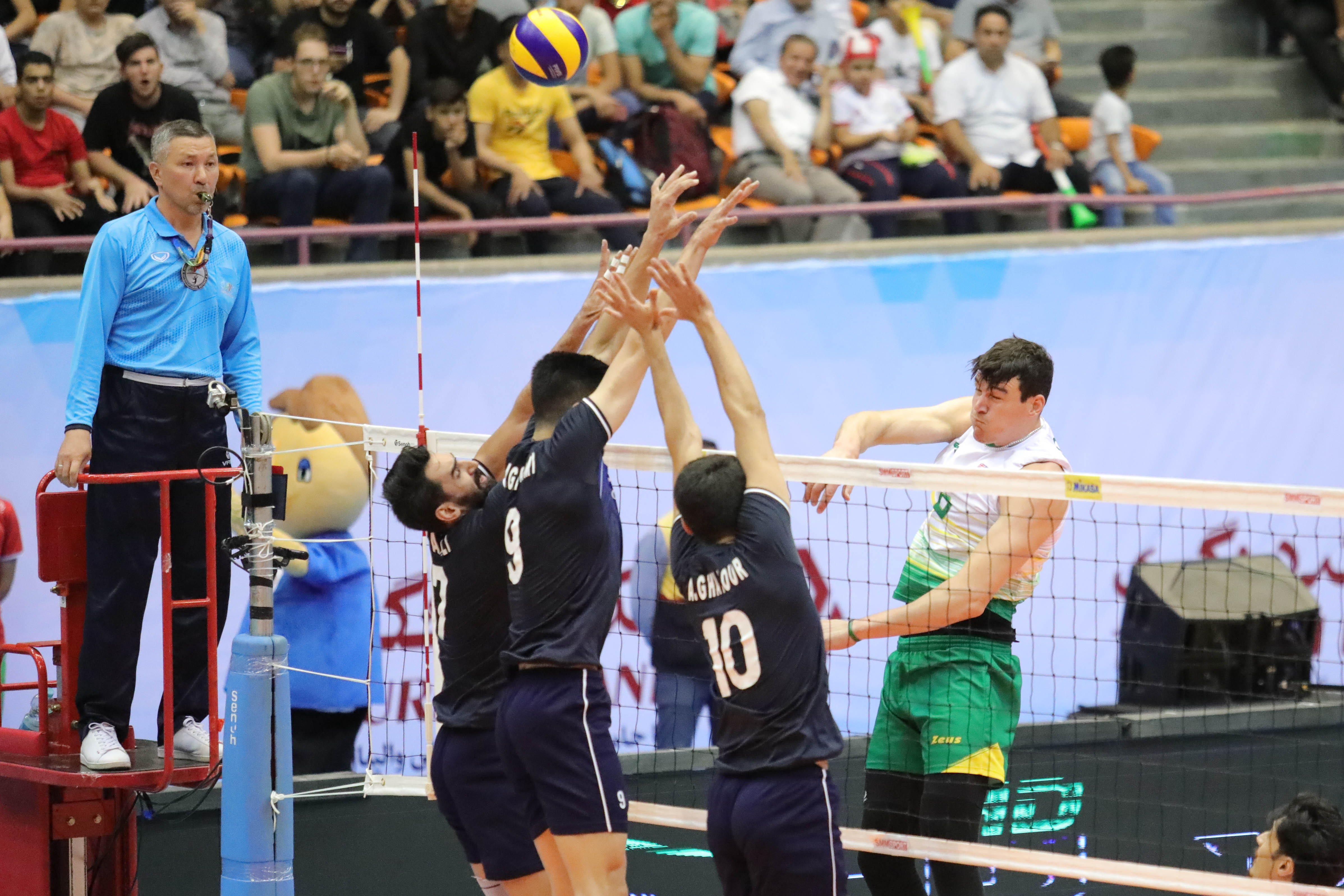 On Sunday, the final day of the pool round-robin preliminaries, formidable Australia stunned Iran with a comeback 3-1 win (22-25, 25-23, 25-21, 25-21) in Pool A, leaving a large number of home fans to depart the 12,000-seater Azadi Sports Complex with heads low in great disappointment. In this hard-fought battle, the superb duo of Thomas Edgar and Nehemiah Mote solidified the Aussies’ defence and helped the classy Volleyroos incredibly cruise past the well-organized Iran in an exhausting action-packed battle. The remarkable win gave Australia the top spot in Pool A with 8 points from three straight wins. Iran came in second place in the pool with 6 points from two wins against one loss. Qatar finished third in Pool A as the last year’s AVC Cup champions claimed 4 points from one win against two losses after powering past Sri Lanka in straight sets 25-21 25-14 25-15 in their last preliminary match on Sunday. The Sri Lankans had no point from three losses in a row to come in fourth place. 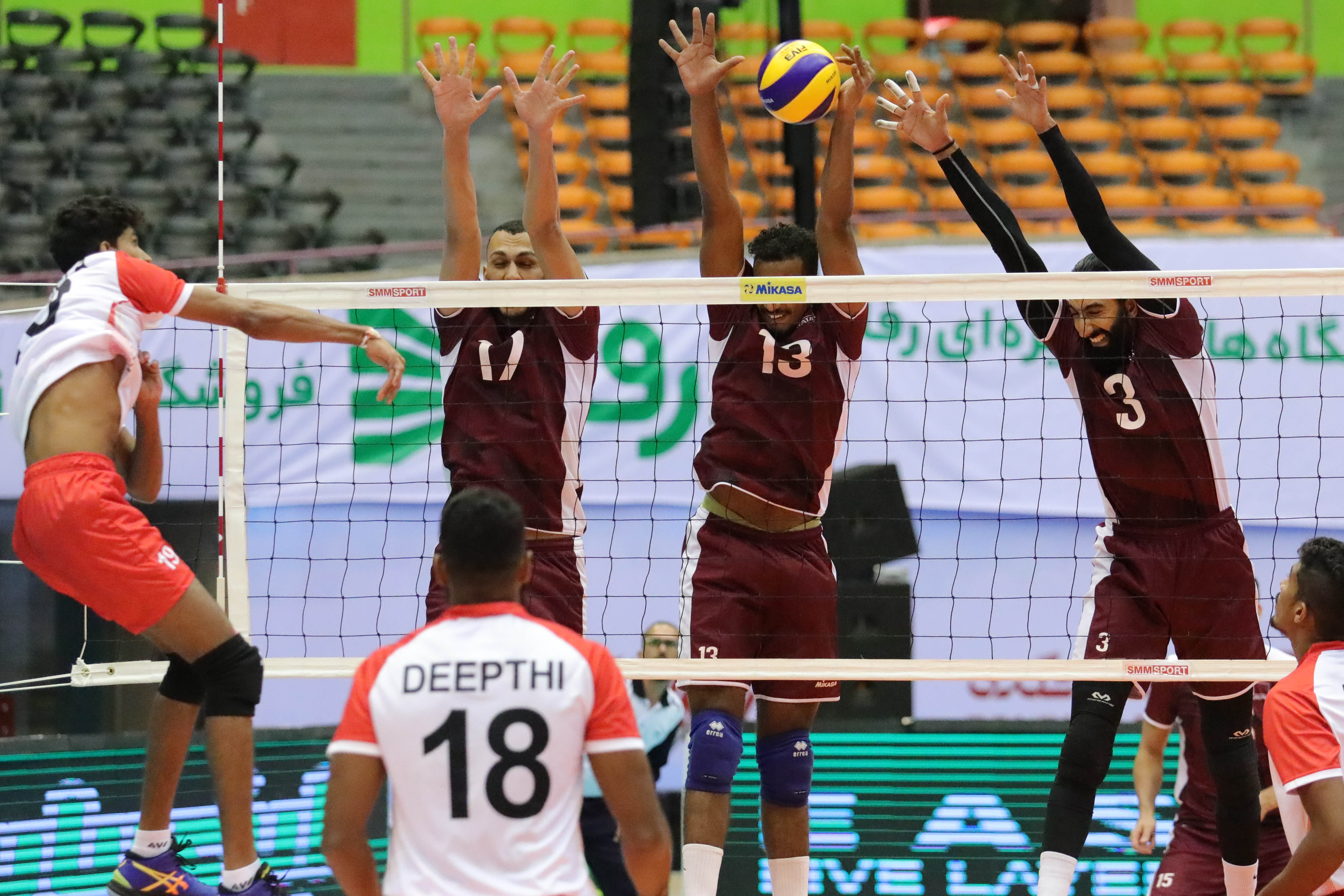 Meanwhile, defending and consecutive two-time champions Japan topped Pool B with 9 points from three successive wins. Japan, current world No.11 and nine-time Asian winners, pulled off a dramatic four-set 25-15 25-18 26-24 25-21 victory over Chinese Taipei in their last preliminary match on Sunday, making Chinese Taipei the second place in the pool with 6 points from two wins against one loss. 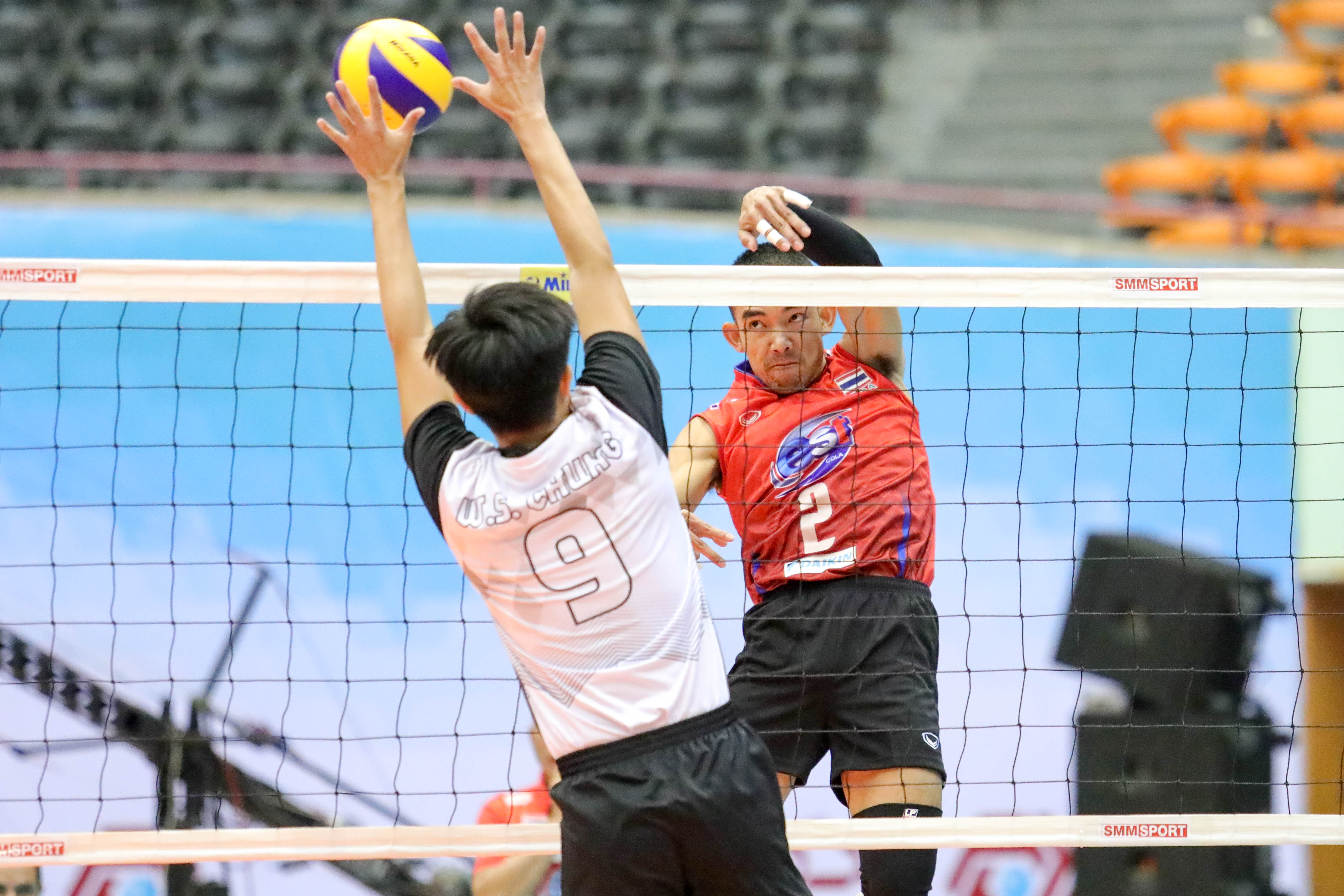 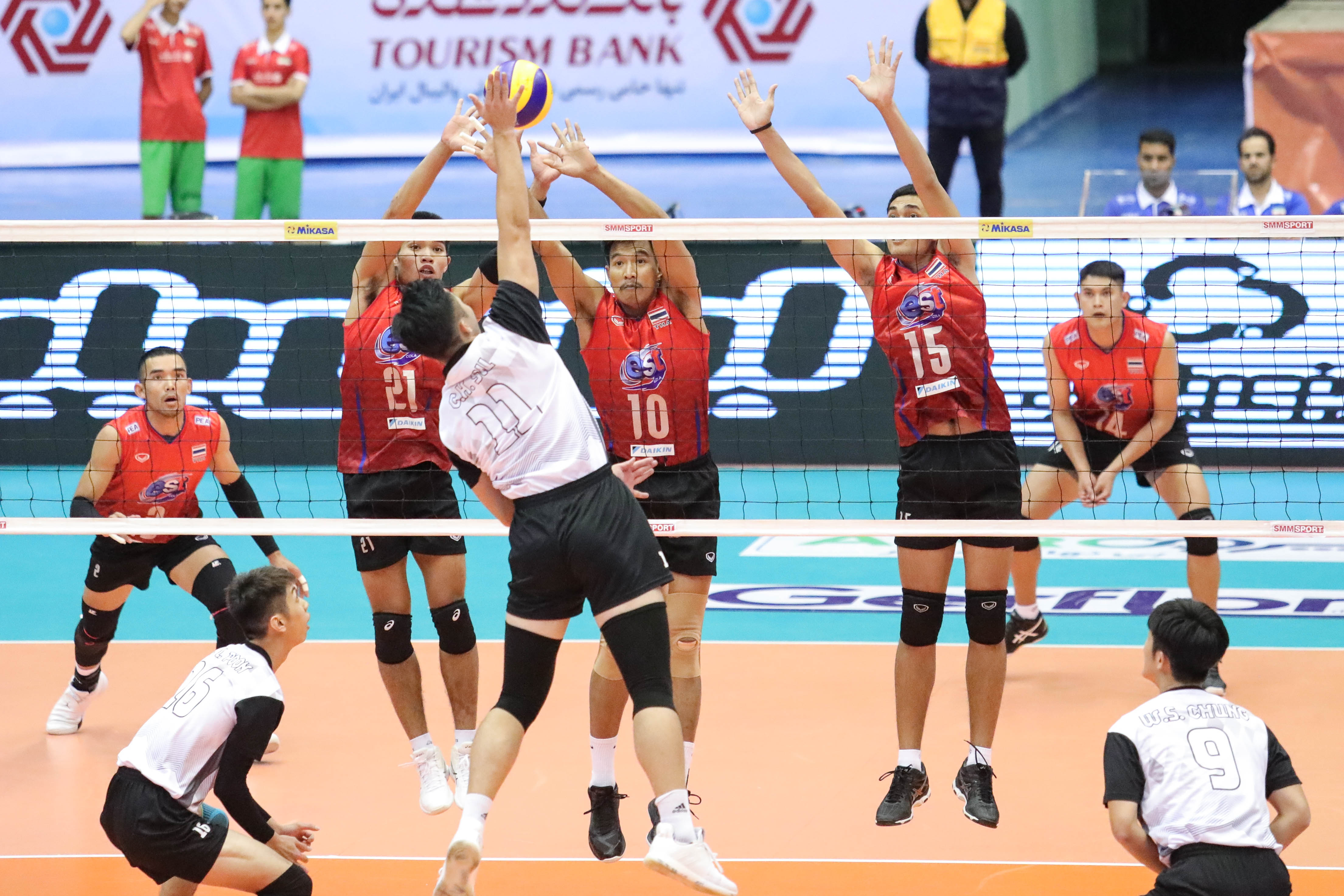 Thailand finished third place in Pool B with 3 points from one win against two losses. Thailand, gold medallists at the 2017 South East Asian Games in Malaysia, proved a cut above Hong Kong China to beat the lacklustrous rivals with a comeback 3-1 (22-25, 25-13, 25-20, 25-21) win in their last preliminary match on Sunday. Hong Kong China lost all three matches to finish fourth in the pool.

China, former three-time Asian champions and current world No.20, made a clean sweep in Pool C after collecting 9 points from three consecutive wins including the sensational 25-23 25-19 25-20 triumph against Kazakhstan, silver medallists at the previous edition in Indonesia two years ago, in their last preliminary encounter on Sunday. The Kazakh side came in third place in the pool after bagging 4 points from one win against two losses. 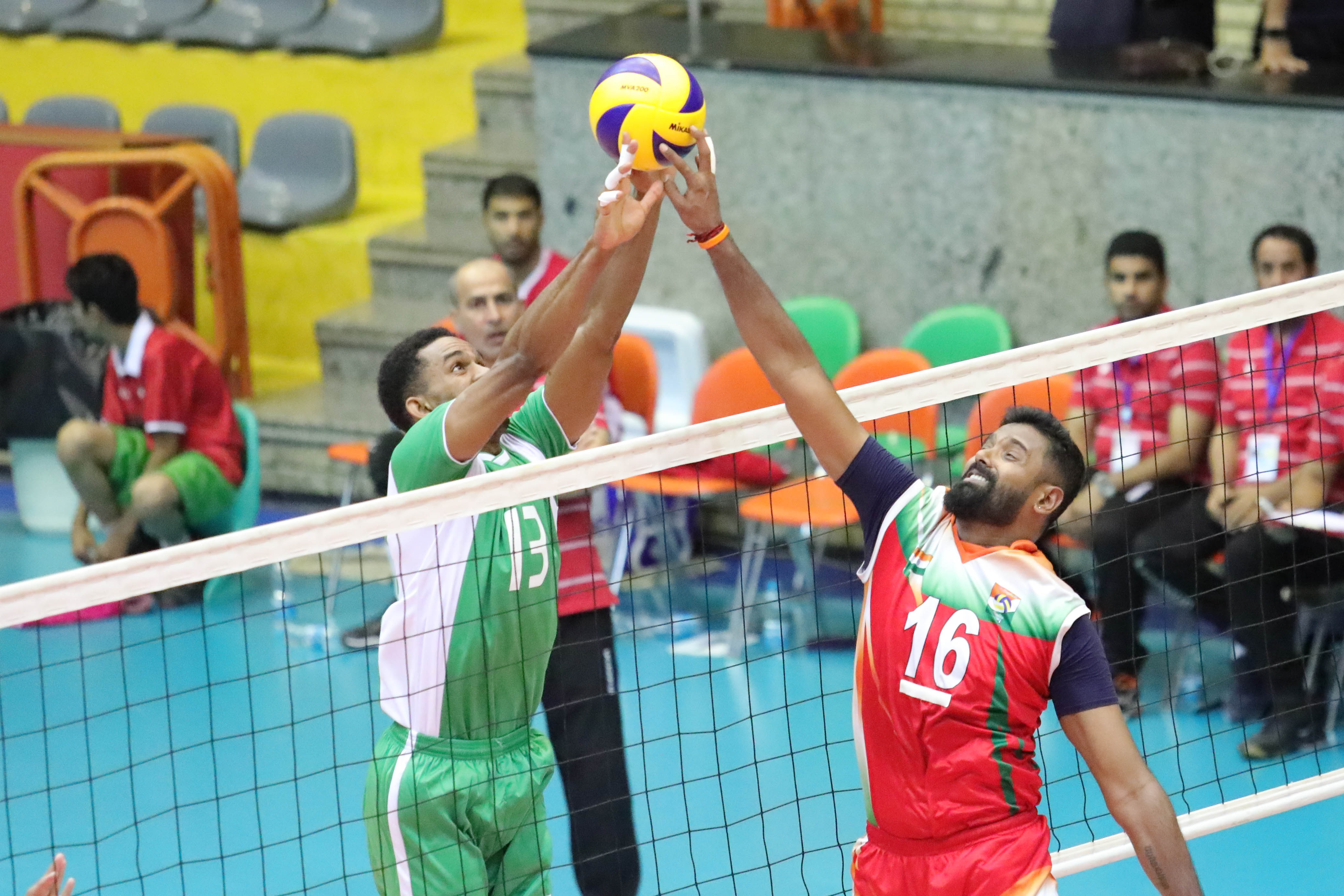 India overtook Kazakhstan to the second place in Pool C following their magnificent come-from-behind 3-1 (22-25 25-12 25-21 25-19) victory over Oman in their last preliminary match on Sunday. India had 5 points from two wins against one loss, while the winless Omanis finished fourth place. 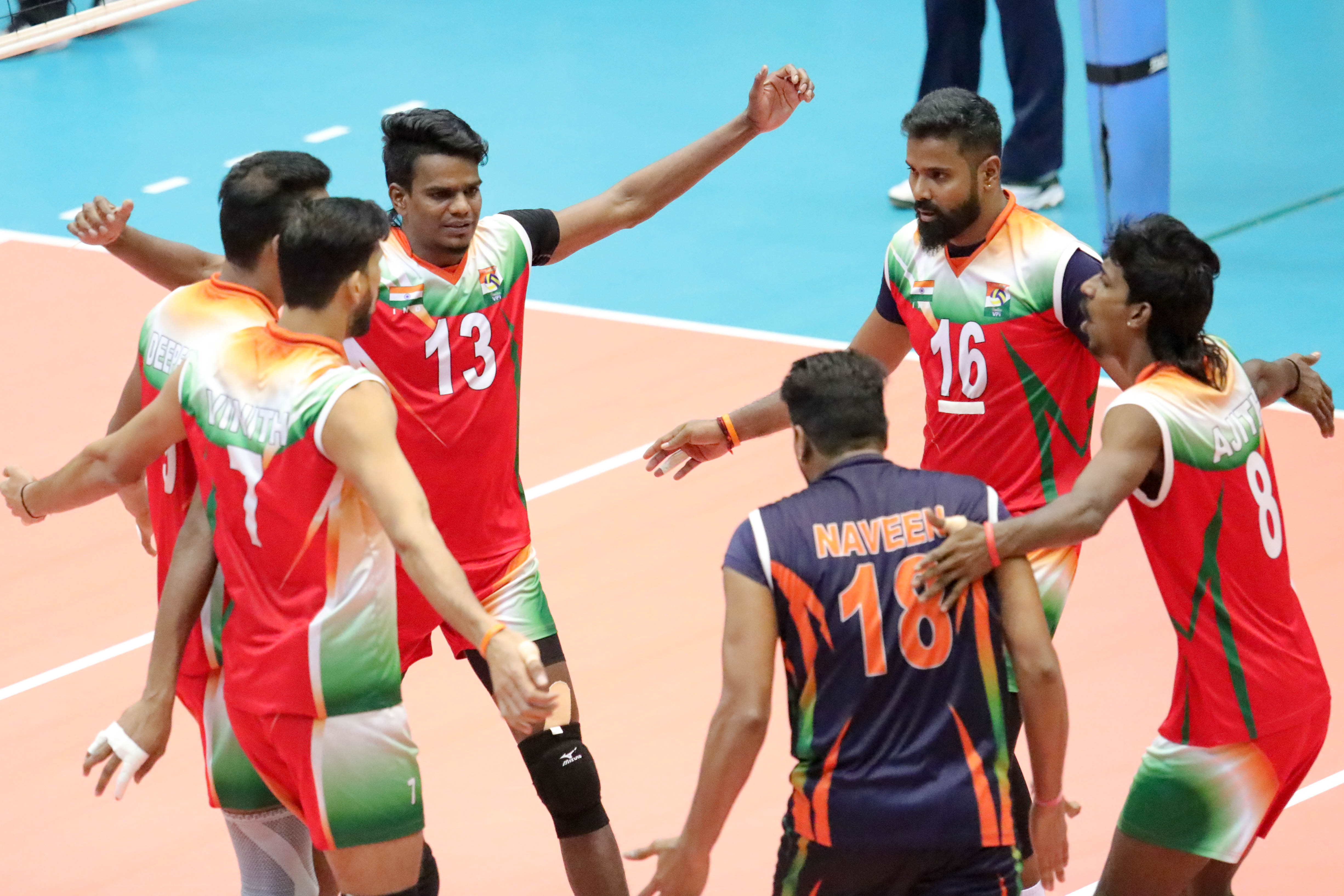 In Pool D, Korea, former four-time champions and current world No.24, became the only team in this championship which have yet lost a single set to their respective rivals. Korea captured the Pool D top spot with 9 points from three wins in succession. In their last preliminary match on Sunday, the Koreans outplayed Indonesia in a highly-anticipated clash in three sets 25-22 25-19 25-20. Indonesia came in third place in the pool with 4 points from one win against two losses. 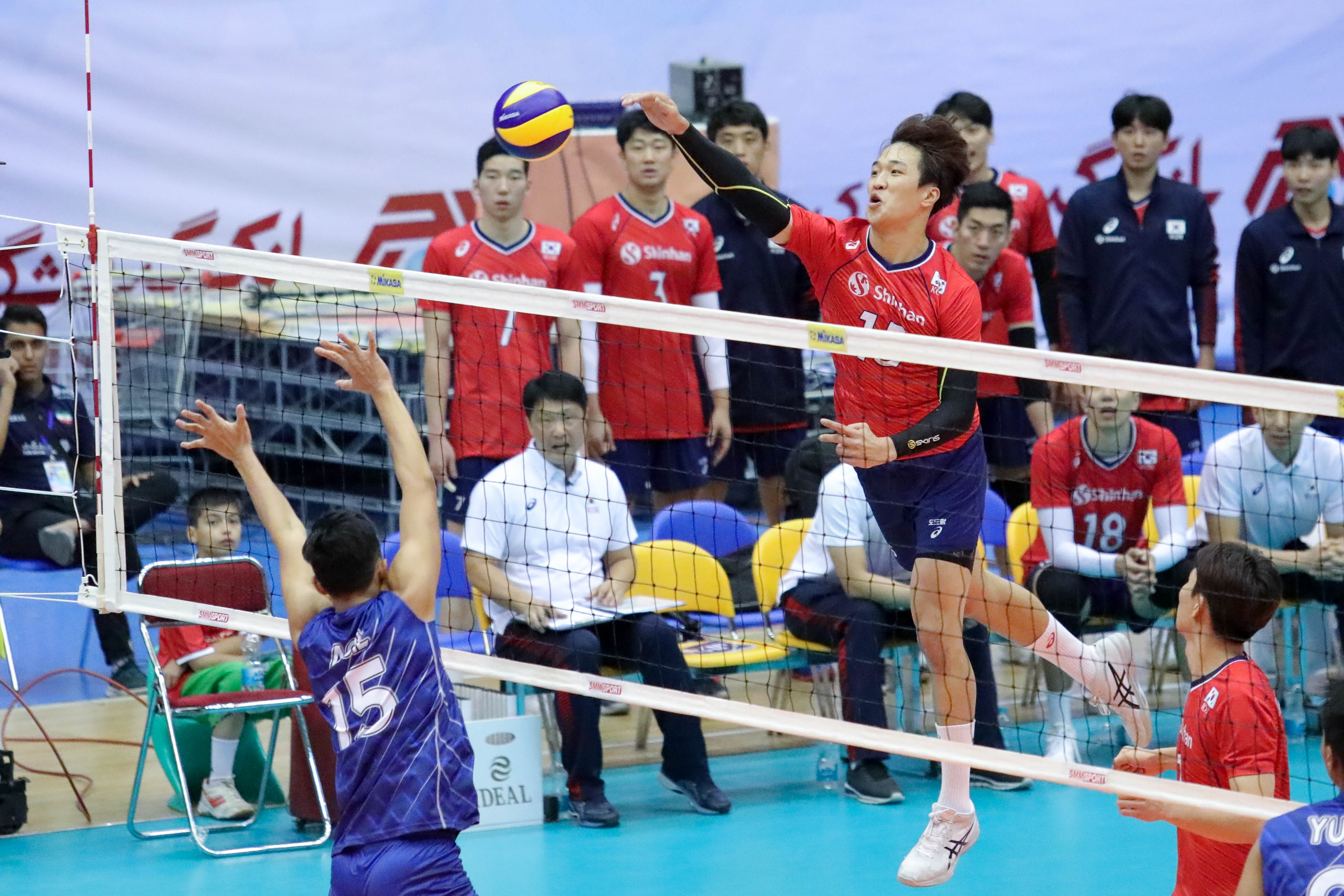 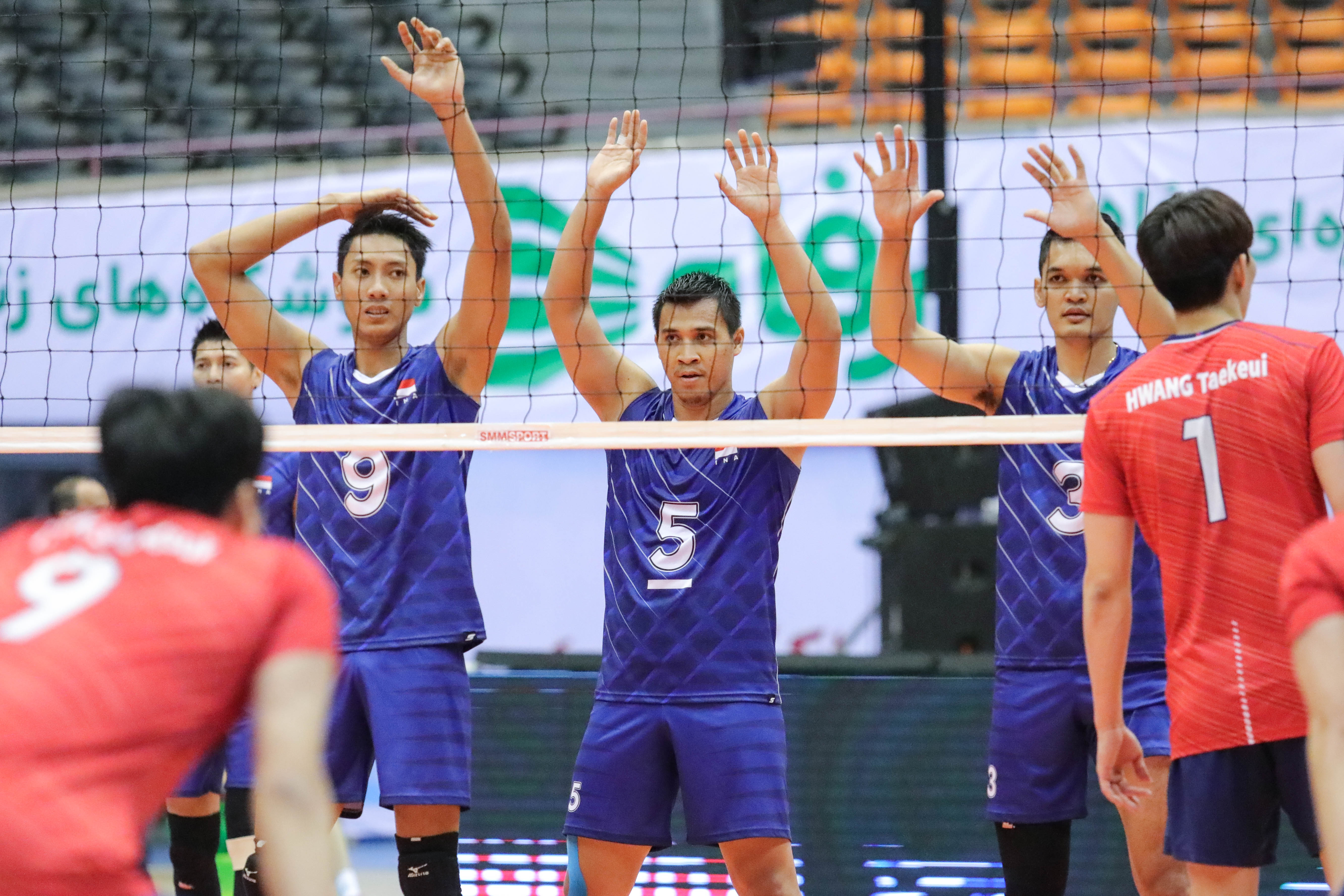 All participating 16 teams completed their pool plays on Sunday as top two teams from each pool advanced to the round of the top eight contesting the round-robin Pool E and Pool F. Teams finishing third and fourth places in each pool have been relegated to the classification round for 9th-16th places in Pool G and Pool H. 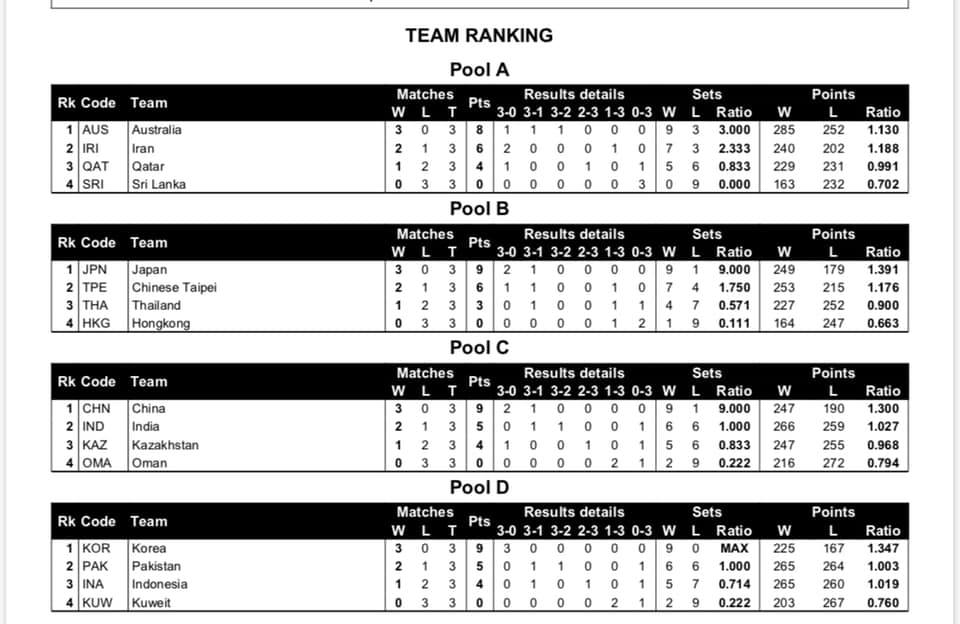 Monday is the rest day. The competition resumes on Tuesday in the top 8 playoffs and the 9th-16th playoff encounters among the lowered-ranked sides. 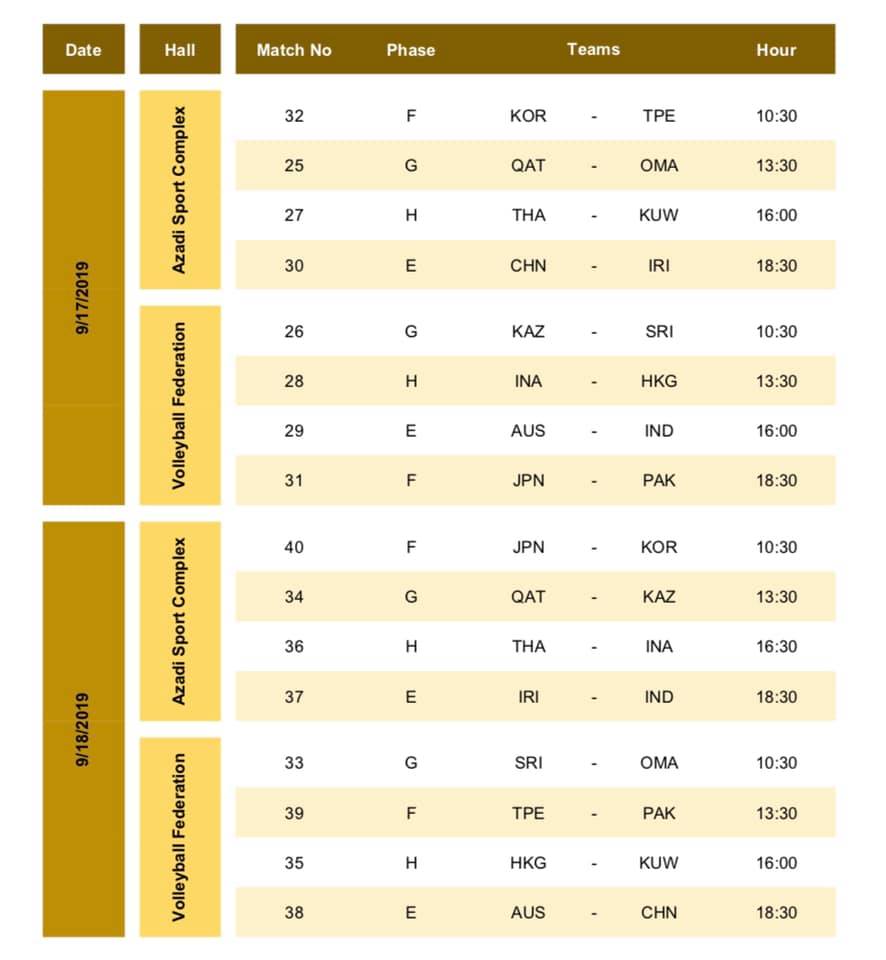 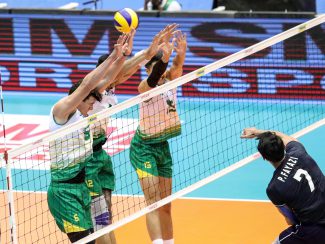 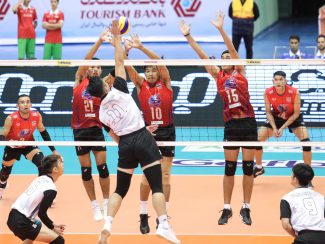 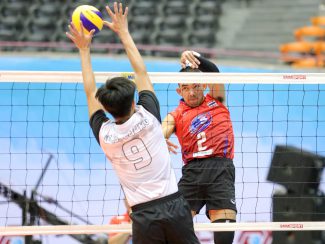 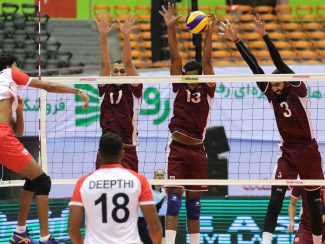 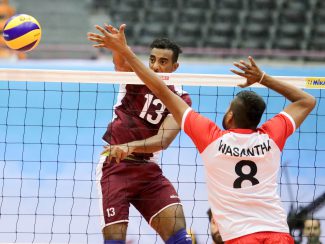 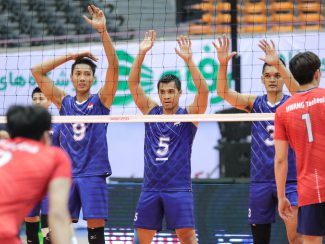 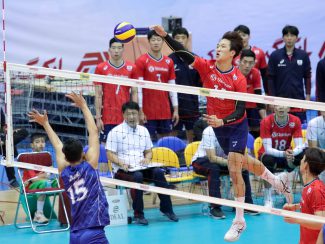 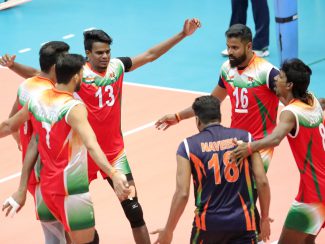 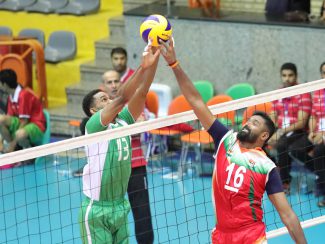 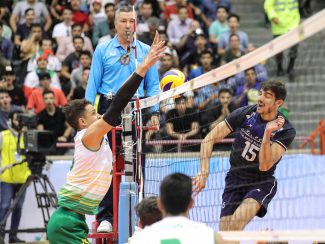 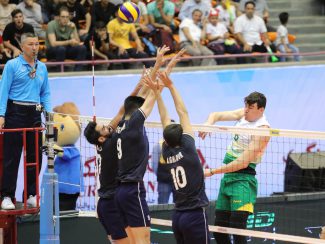 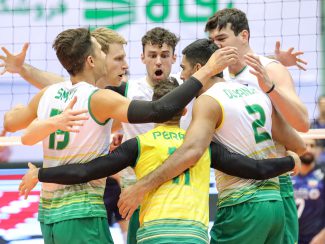 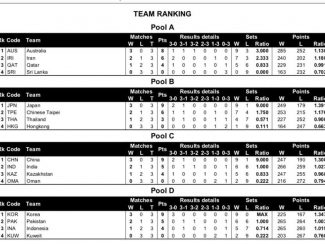 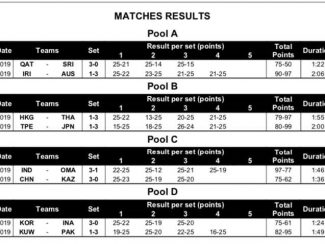