For the inaugural season of the Volleyball World Beach Pro Tour, some of the most famous beaches and iconic cities will play host over the course of the 2022 calendar. 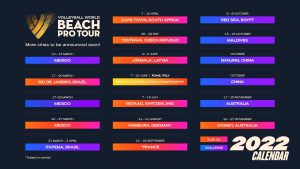 The new Beach Pro Tour, unveiled in Sardinia last month, will visit iconic and historic venues like the Grand Parade in Cape Town, South Africa, Rio de Janeiro, which hosted the Olympic beach volleyball tournament in 2016, and the Swiss winter resort of Gstaad, a favourite with athletes and fans since it first became a hotspot for beach volleyball over 20 years ago.

Other celebrated locations, such as the shores of the Red Sea in Egypt, Itapema in Brazil and the Maldives in the Indian Ocean will play host to tournaments. Additional stops in China, France, Australia, Mexico and more, will be confirmed in due course.

The calendar will be continually updated as more and more exciting locations around the world sign on to become part of the dynamic season ahead. A season which will also include the World Championships in Rome, already set for 7-19 June at the Italian capital’s historic Foro Italico.

The Volleyball World Beach Pro Tour is a unique opportunity in the modern sports and entertainment event world. Featuring the world’s top beach volleyball athletes and thriving with an energy that extends beyond the court; with live music and a festival like atmosphere to keep fans entertained all day and into the night.

All Elite16 events will be broadcast live on Volleyball TV.

Futures events will also be added to the schedule in the months ahead.