Lebanon celebrate their victory against Jordan

Bangkok, Thailand, July 26, 2022 – With only one match remaining before the top four teams from each pool will secure their berths to the next round, hosts Saudi Arabia are assured of making the cut for the cross quarterfinals in the 1st West Asia Men’s U20 Volleyball Championship at Prince Nayef Bin Abdelaziz Sports Hall in Dammam, Saudi Arabia on Monday.

Unbeaten Saudi Arabia stayed atop Pool B with a maximum 9 points after three straight wins. The host side had a rest day on Monday and are due to next take on winless Qatar in their last match on Tuesday. However, the Saudi Arabians are quite certain of qualifying for the quarterfinals as the Pool B winners. 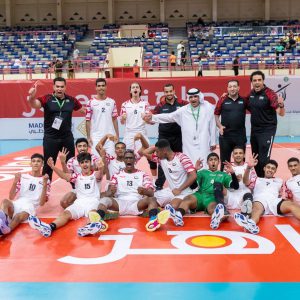 On Monday, the United Arab Emirates handed Bahrain the first loss in this tournament, coming from behind to beat the tough rivals in hard-fought five-set thriller in Pool A 18-25, 25-21, 25-23, 12-25, 15-8 to end their campaign in the preliminary round with 5 points from 2 wins against 2 losses. 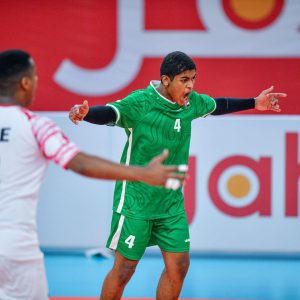 Bahrain collected 7 points from 2 wins against one loss and will take on Jordan in their last match on Tuesday. Jordan succumbed to their third straight loss on Monday after going down to Lebanon in comfortable sets 13-25, 20-25, 12-25. 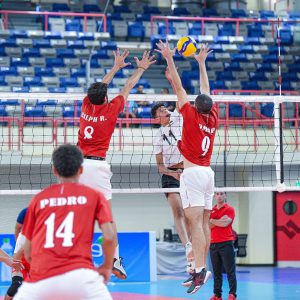 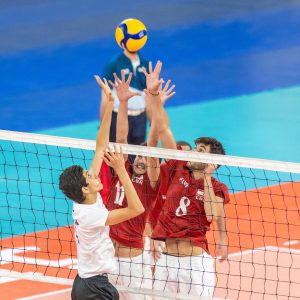 Jordan and Lebanon fight for the ball over the net 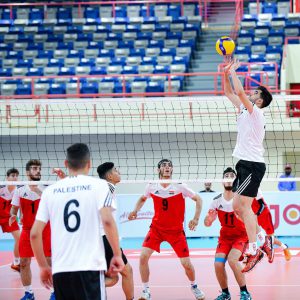 Palestine in action with Syria 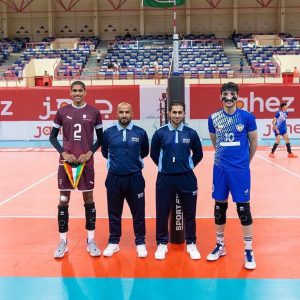 Qatar and Kuwait ahead of their match 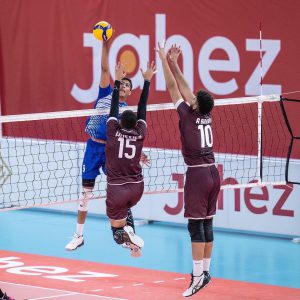 Qatar try to block a spike from Kuwait

Tuesday will be the last day of the pool round-robin preliminaries which see Bahrain in action against Jordan and Lebanon face off with Iraq in Pool A and hosts Saudi Arabia take on Qatar and Kuwait play Palestine in Pool B.

After the preliminaries, the top four teams from each pool advance to the cross quarterfinals, with Group A winners taking on Group B fourth-placers and Group A second place challenging Group B third-place finishers.

The teams finishing fifth in each group will fight it out for ninth place overall. The semifinals and classification round for top eight-placers will be held on Friday. All participating teams will have one-day rest the following day, while the final classification matches including bronze-medal and gold-medal matches will all take place on Sunday, July 31. 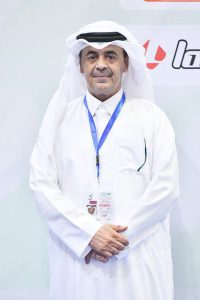 Meanwhile, Ibrahim Al-Mahmoud, Member of the Referee Committee in the West Asia Volleyball Association, expressed his satisfaction over the referees’ role and responsibility in this tournament, citing that the level of arbitration is reassuring and the tournament succeeded before it started.

He confirmed that the level of referees in the first West Asia Men’s U20 Championship hosted by Saudi Arabia is very reassuring, noting that he was convinced that there will be no problems or protests until the end of the tournament.

“On Day 4, we found everyone is satisfied with the referees’ performances through our proximity to the participating coaches and teams. Although the tournament includes only two international referees and we made the most of the referees nominated in their local tournaments, we found that their access to continents and internationals will be easy due to their distinguished levels.”

He added, “I followed the two Saudi Arabian referees 6 months ago, and without complacency we dealt with them as international referees, given the high level they enjoy, as well as the Qatari and Jordanian referees, as I consider them among the first elite referees. Rely on them without any fear.”

Al-Mahmoud praised the high-level organization of the tournament, and confirmed that it succeeded before it started, saying: “Talking about Saudi Arabia as if I were talking about Qatar, the former has great potential. That enables the country to host one of the best and largest tournaments.”