Dhaka, Bangladesh, November 12, 2019 – In-form Nepal thrashed hosts Bangladesh in easy straight sets on Tuesday to surge ahead pacesetters Maldives to the top of the standing and secure a final berth of the “Bangamata” 2019 Asian Senior Women’s Central Zone Volleyball Championship at the Shaheed Suhrawardi Indoor Stadium. 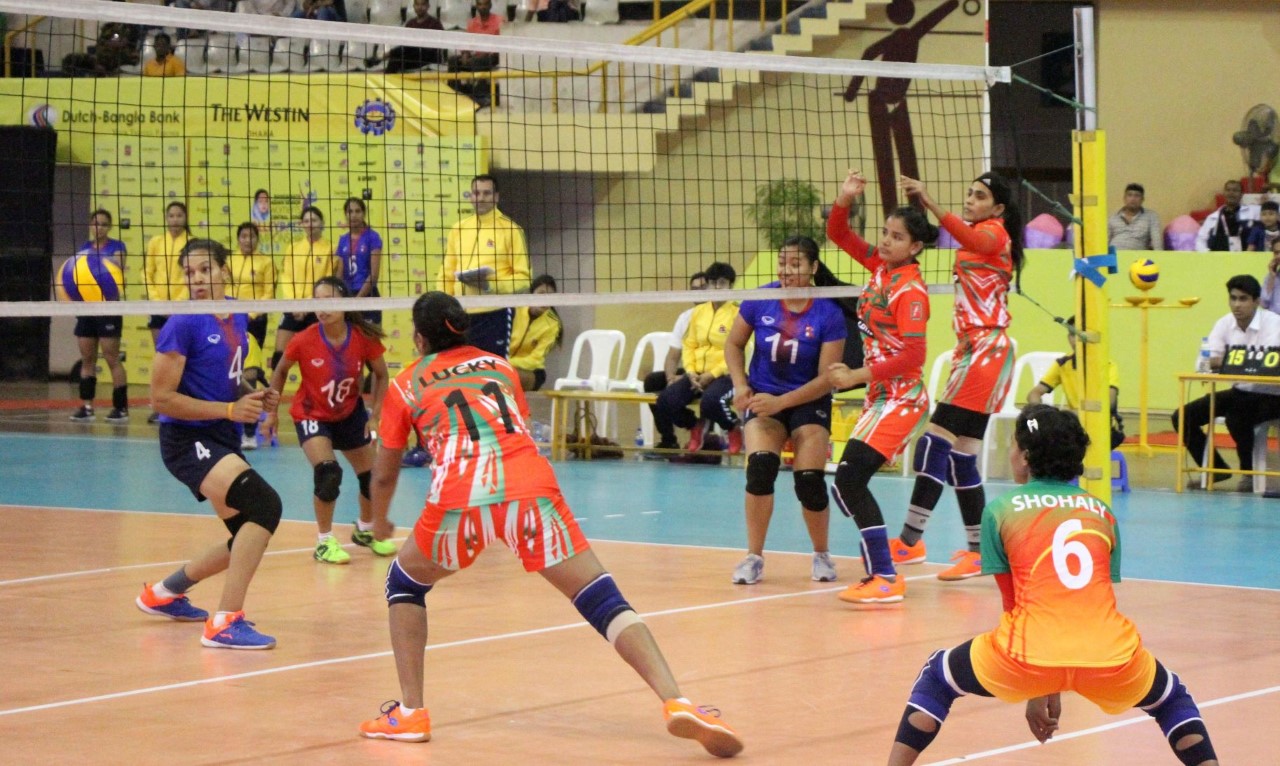 Following the scintillating win, Nepal, the only team which have yet to lose a single set to their respective rivals in the single round-robin preliminaries, are assured of setting up a final clash against Maldives to vie for the top honour and gold medal. 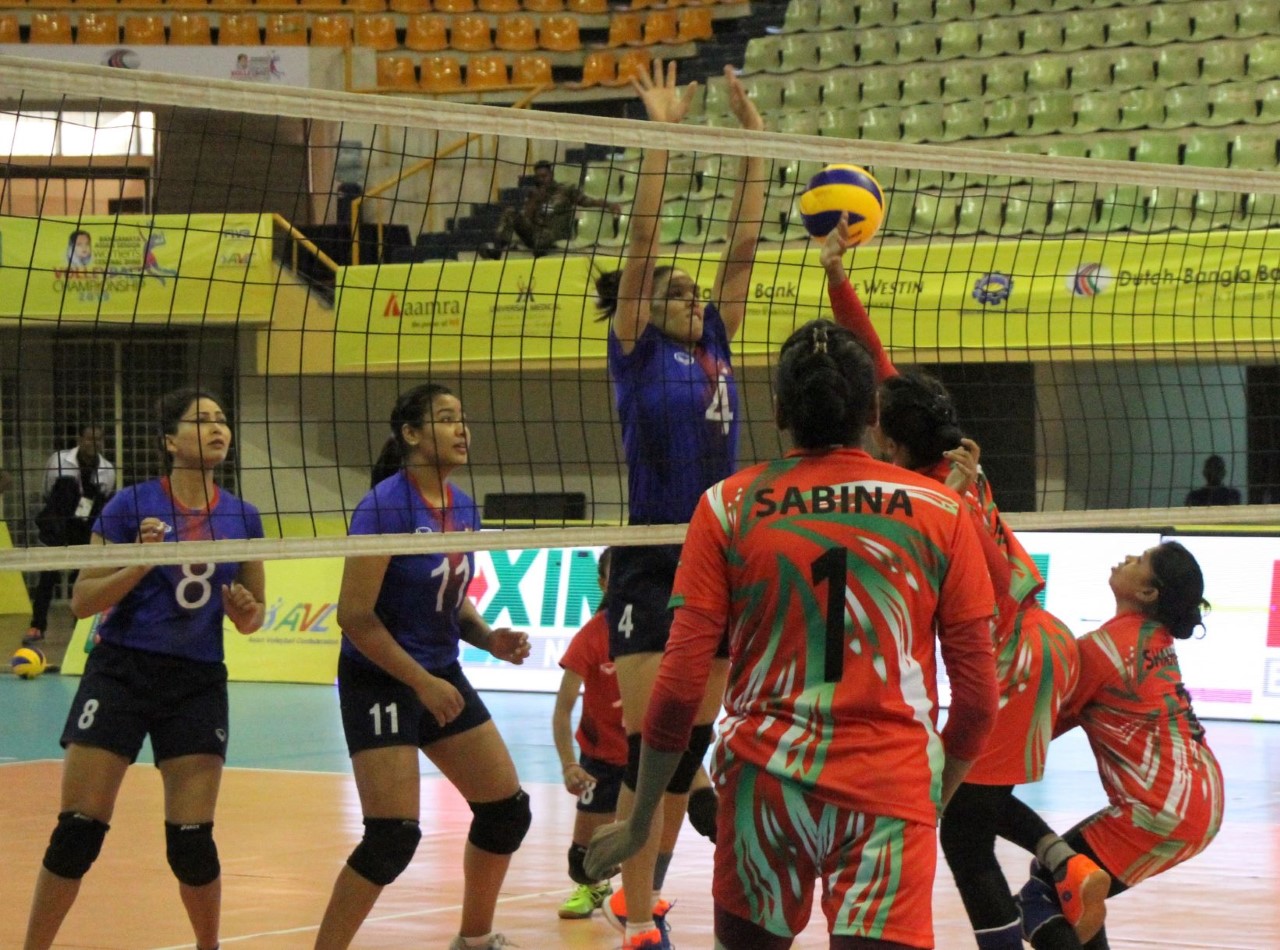 After four days of the round-robin competition, Nepal went atop the standing with 9 points from three straight wins, while Maldives dropped to the second place overall with 8 points from three wins in a row. Kyrgyzstan had 4 points from one win against 2 losses and hosts Bangladesh collected 3 points from one win against 2 losses to come in third and fourth places respectively. Afghanistan already completed their campaign, suffering four losses in a row in the preliminaries to crash out of the tournament.

With one more day to go ahead of the final-day competition, Nepal and Maldives, are uncatchable and expected to finish top two in this five-team tournament no matter which team will reign supreme. Kyrgyzstan and hosts Bangladesh will contest the third-place playoff for bronze medal, while winless Afghanistan are certain of returning home empty-handed.

On Wednesday, Nepal will play their last preliminary match against Maldives, in which the winning team will capture the top spot in the round-robin preliminaries and the losers the second place. However, both teams will play a rematch in the Thursday’s final showdown as the winners will be crowned the eventual champions.

Hosts Bangladesh and Kyrgyzstan will also contest their last preliminary encounter on Wednesday when the winning team will finish third and the losers the fourth place in the preliminaries. Both sides will then fight it out again in a bronze-medal match the following day.

In their third match of the tournament on Tuesday, Nepal spent only 56 minutes in outclassing hosts Bangladesh in a completely one-sided encounter 25-7 25-6 25-6. Pratibha Mali chipped in with 14 points including 11 attacks from 26 attempts. Sunita Khadka added 10 points including a team-leading 5 blocks, while Aruna Shahi scored 8 aces from 23 serves. Most Sabina Khatun led Bangladesh with 3 points. 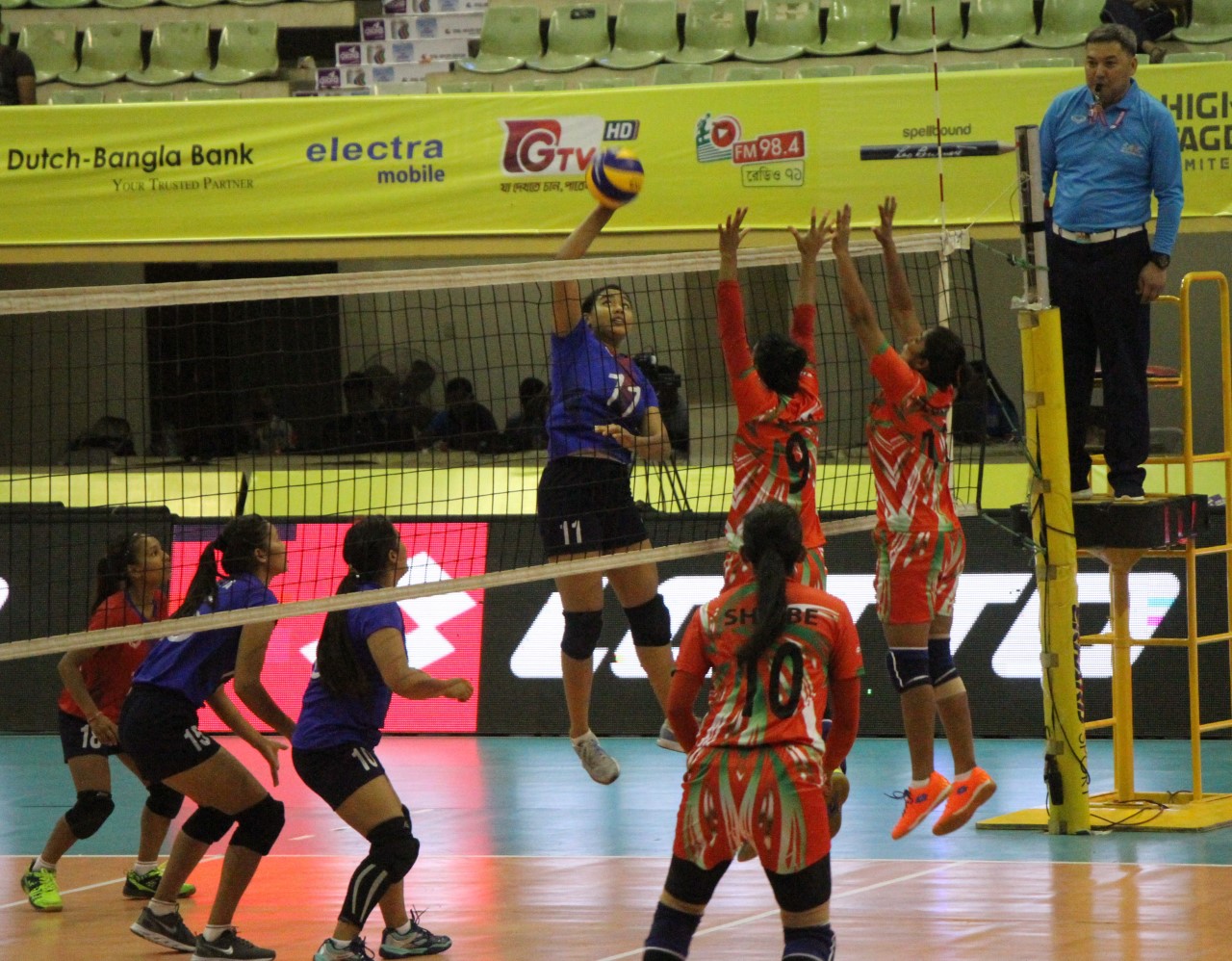 Earlier, Kyrgyzstan performed well up to their level to brush off Afghanistan in comfortable straight sets 25-6 25-7 25-15. Alina Garkushina topscored with 13 points for Kyrgyzstan, while Frozan Hadi, Fatima Qulami and Fatima Askari scored one point apiece for Afghanistan and took an advantage of the opponents’ errors with 25 points. 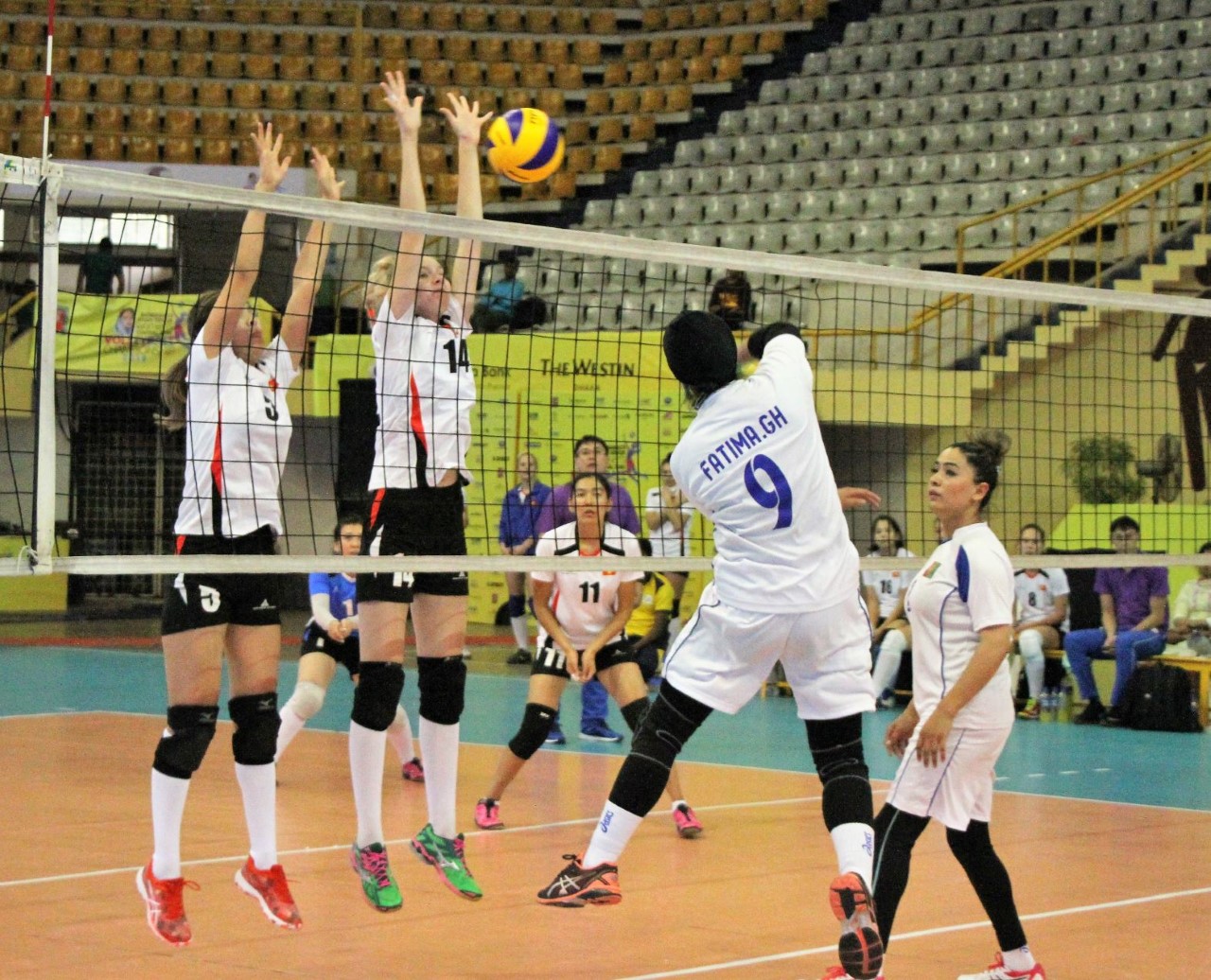 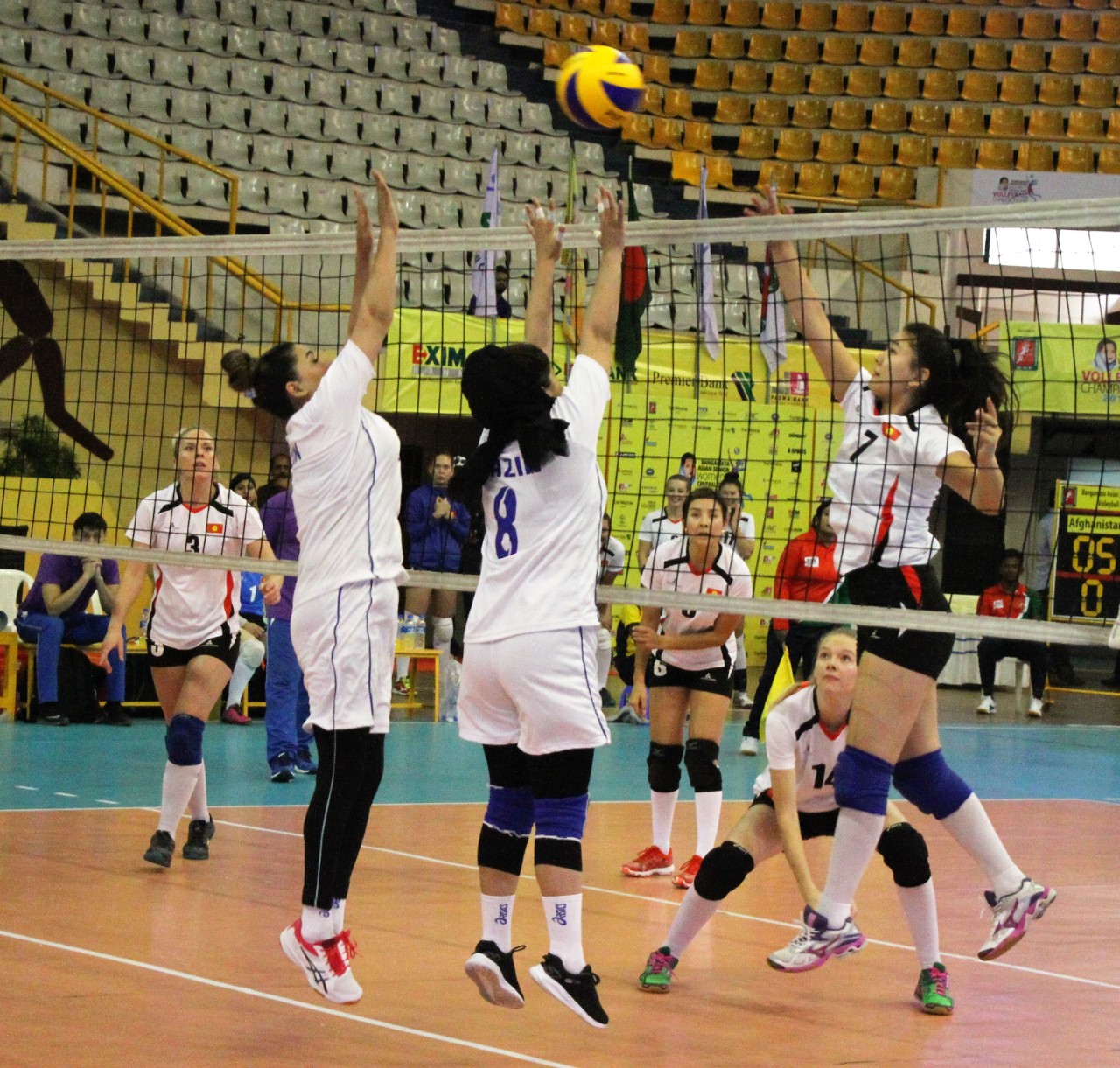 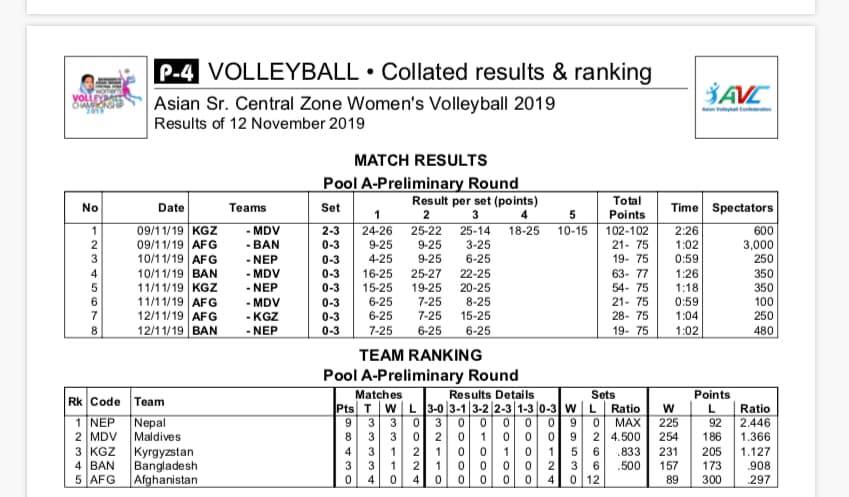