Taipei, Chinese Taipei, April 25, 2019 – Cultural and Sports Club of Varamin Municipality survived a strong challenge from Chennai Spartans to overpower the Indian side in epic hard-fought four-set thriller 25-23 25-22 22-25 27-25 to secure Iran the 16th final at the 2019 Asian Men’s Club Volleyball Championship at the University of Taipei (Tianmu) Gymnasium on Thursday. 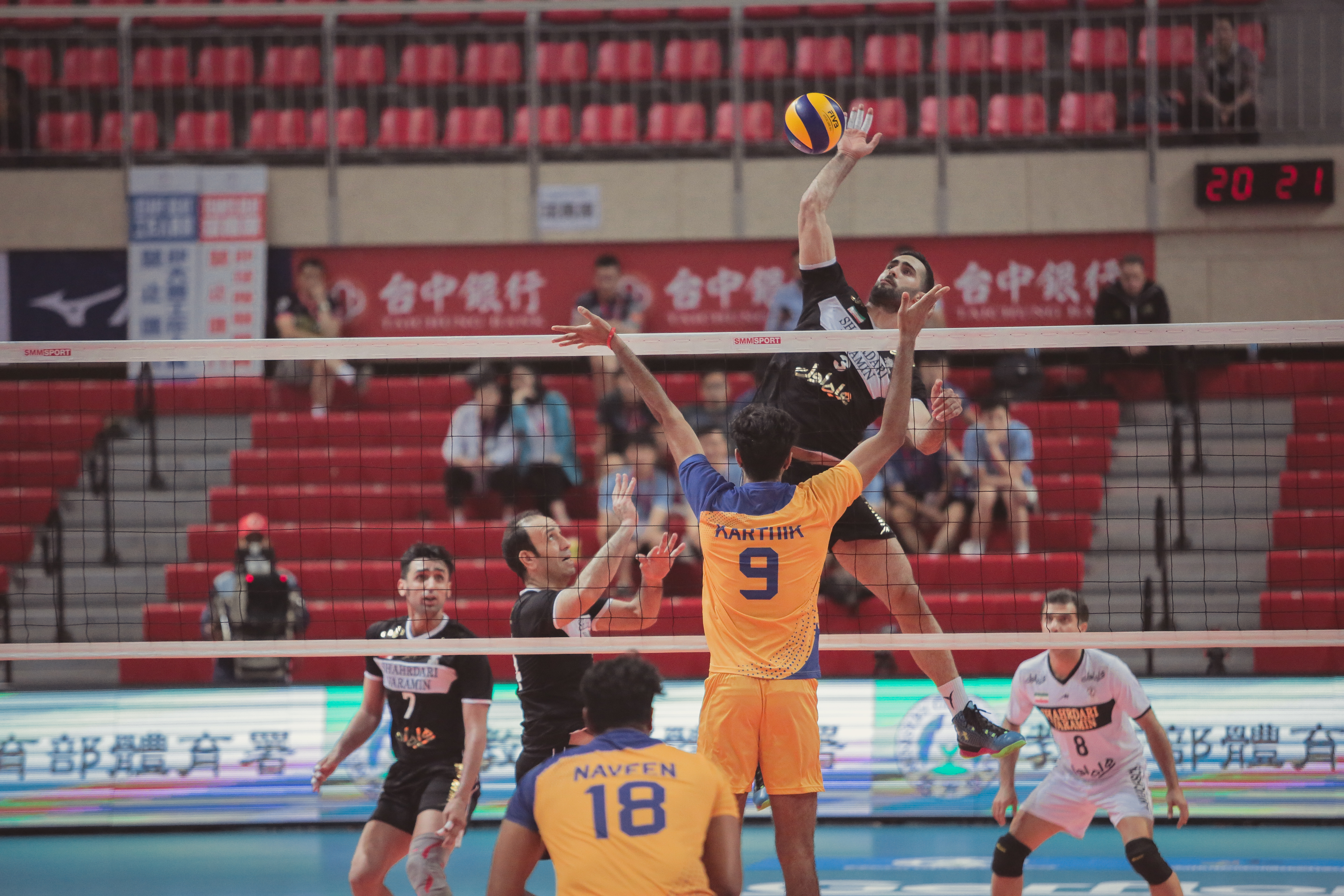 Among these 15 editions where teams from Iran had made it to the final round, they captured 13 Asian Men’s Club Championship titles altogether – Paykan Tehran (7 titles), Sarmayeh Bank Tehran (2), Sanam Tehran (1), Kalleh Mazandaran (1), Matin Varamin (1), Khatam Ardakan (1), 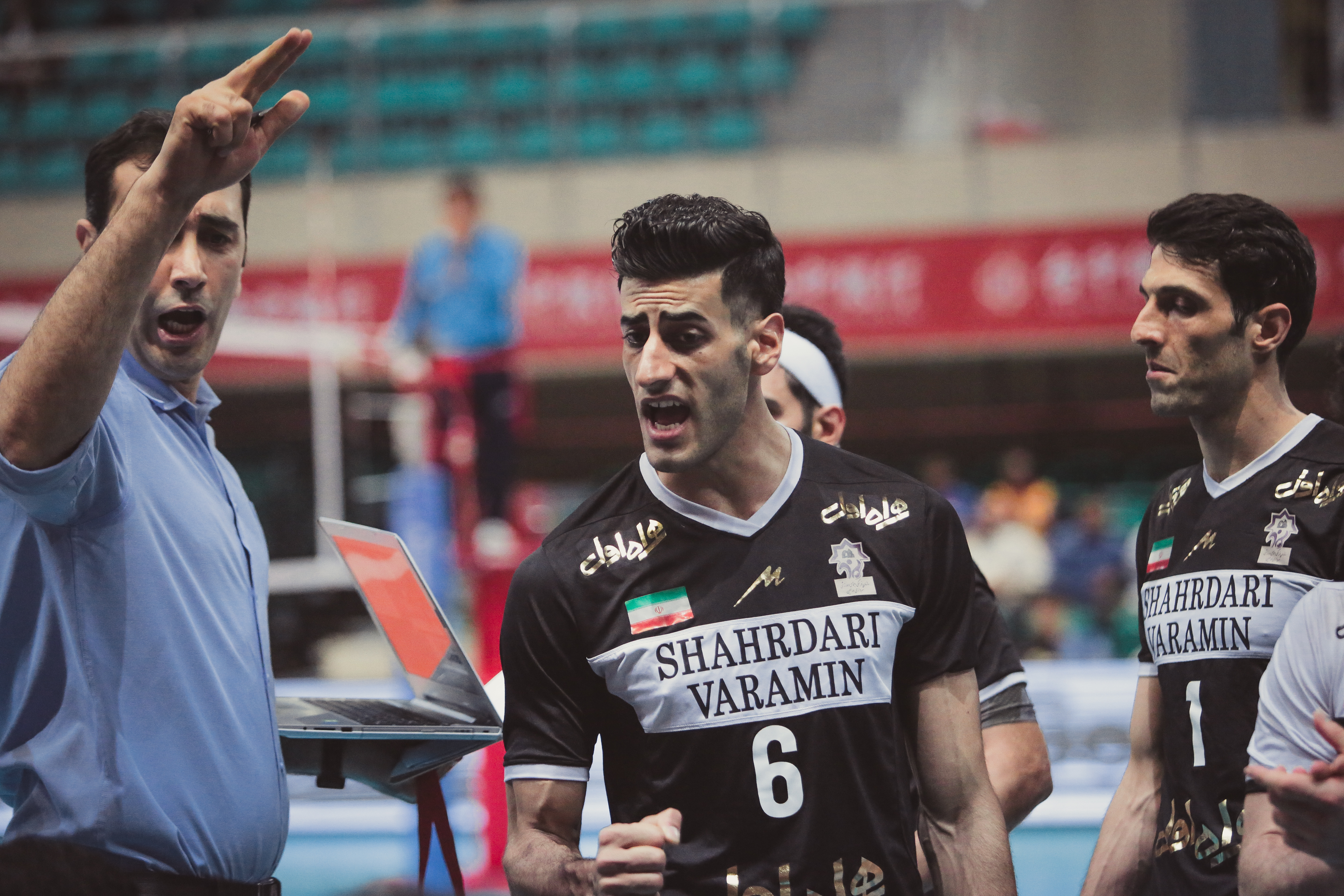 Iran is defending and successive three-time champions, with Sarmayeh Bank Tehran winning in 2016 and 2017 and Khatam Ardakan reigning supreme in 2018. With the 3-1 win against Chennai Spartans on Thursday, Cultural and Sports Club of Varamin Municipality became the 7th club team from Iran to compete in the final showdown.

In their tough clash against Chennai Spartans on Thursday, Fayazi Damnani Purya scored a match-high 20 points for Varamin including 17 attacks from 39 attempts, one block and 2 aces, while Taghavi Seyed Arash and Jalali Alireza contributed 14 and 13 points respectively for the winning team. Rai Ashwal led Chennai Spartans with 18 points including 11 kills and team-leading 5 blocks and another team-leading effort of 2 aces. 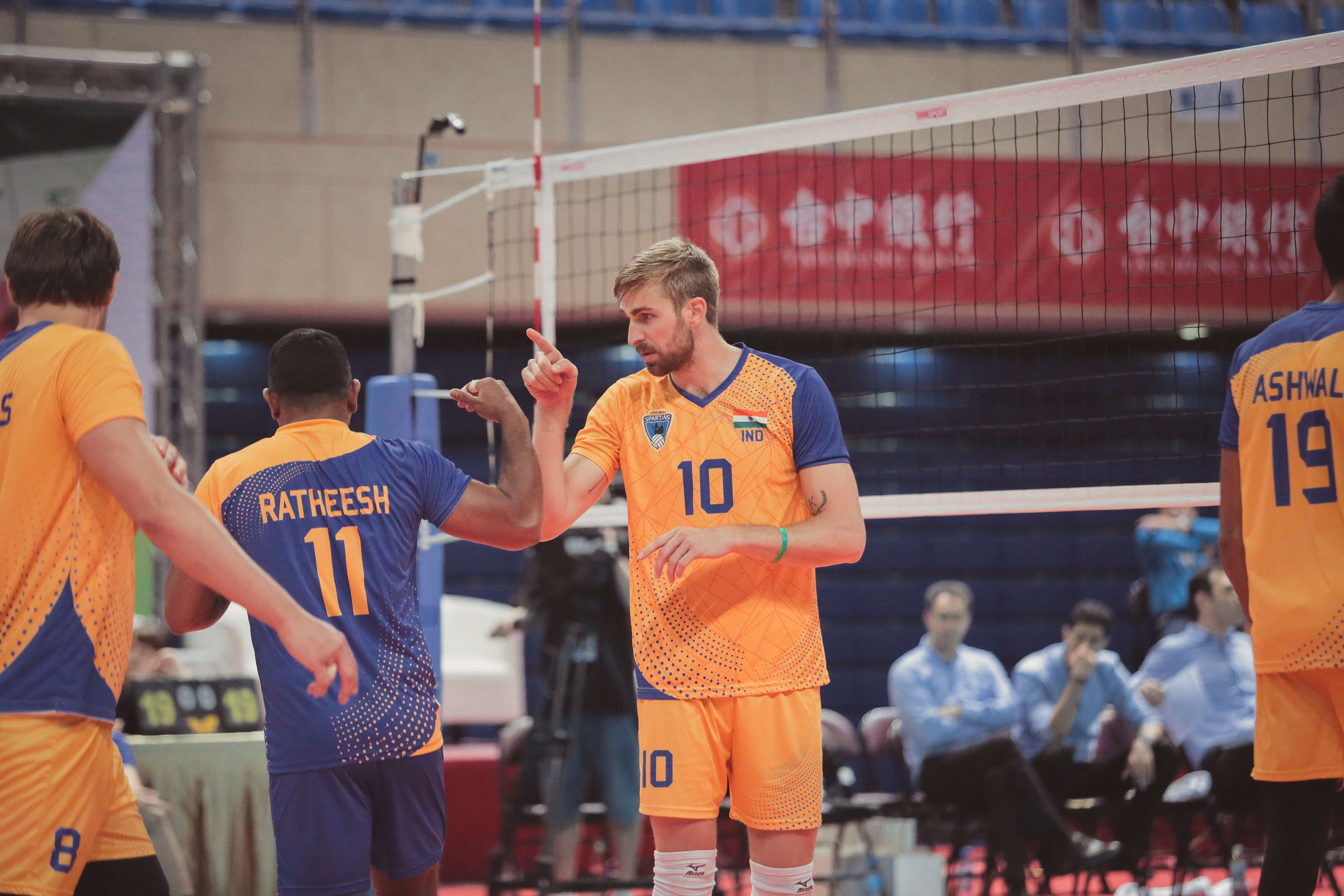 Chennai Spartans made history the previous day following their straight-set victory over Vietnam to enter the semi-finals of the championship for the first time ever regardless of any Indian team taking part in this championship.

The first set was incredibly close with neither side able to break clear from the beginning, but it was the Iranians who led 18-17. From then, the on-going battle turned out to be a very tight contest. Varamin performed superbly to clinch the hotly-contested set 25-23.

The second set was the similar script when both sides tried their best to topple each other. As Arash and Purya tore the Indian defence into pieces with their mighty attacks, Chennai Spartans dropped their rhythm to come up with poor reception, allowing the Iranians many attacking opportunities. Varamin remained in irresistible form to take a three-point ahead at 22-19. Despite a serious threat from Chennai, the Iranians still had enough to hold the rivals off before winning 25-22. 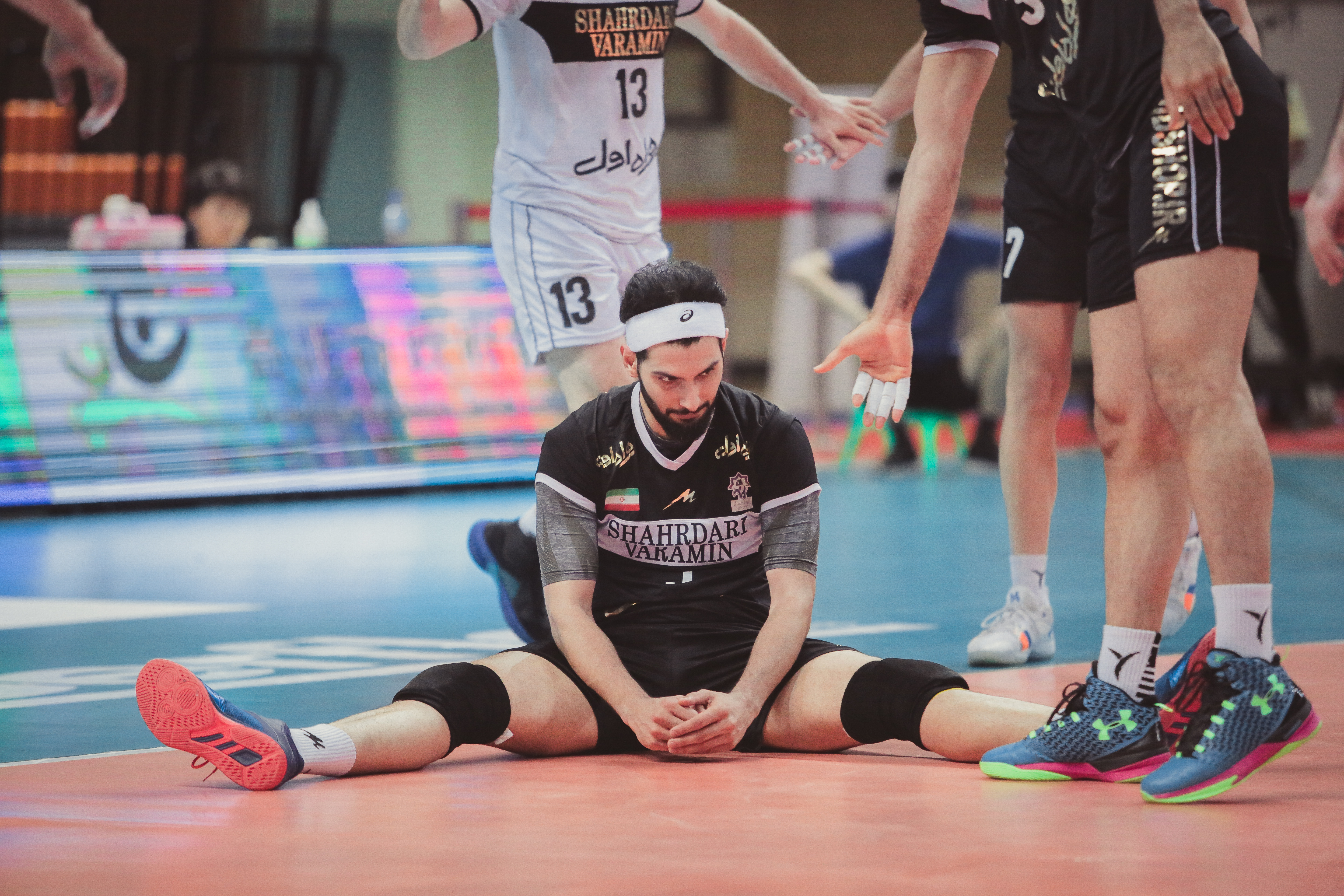 Going down two sets, the Indians put their acts together in the third set, with Raja Naween and Latvian Sorokins Ruslans firing some sharp spikes which foiled the rivals’ blocking efforts. As A. Karthik put the Indian team in front with a two-point clear at 21-19, Varamin played cool under pressure to close out the margin at 22-22. However, Naween and Ruslans were looking increasingly dangerous from spike range to help the team win three successive points for the Indians’ 25-22 win.

The fourth set once again got heated when Varamin and Chennai gave it all what they had to win the set which saw both sides trade points through aggressive attacks and great serves. As the score was tied at 25-25, Arash carried out a fine attack to give the Iranians one point ahead at 26-25 and shortly after that, Rai Ashwal blocked Arash, but the ball bounced off the court sideline. Varamin captured the hard-fought set 27-25 and match. Learning that they booked a ticket for the final round, the Iranians danced happily in a circle and hugged each other. 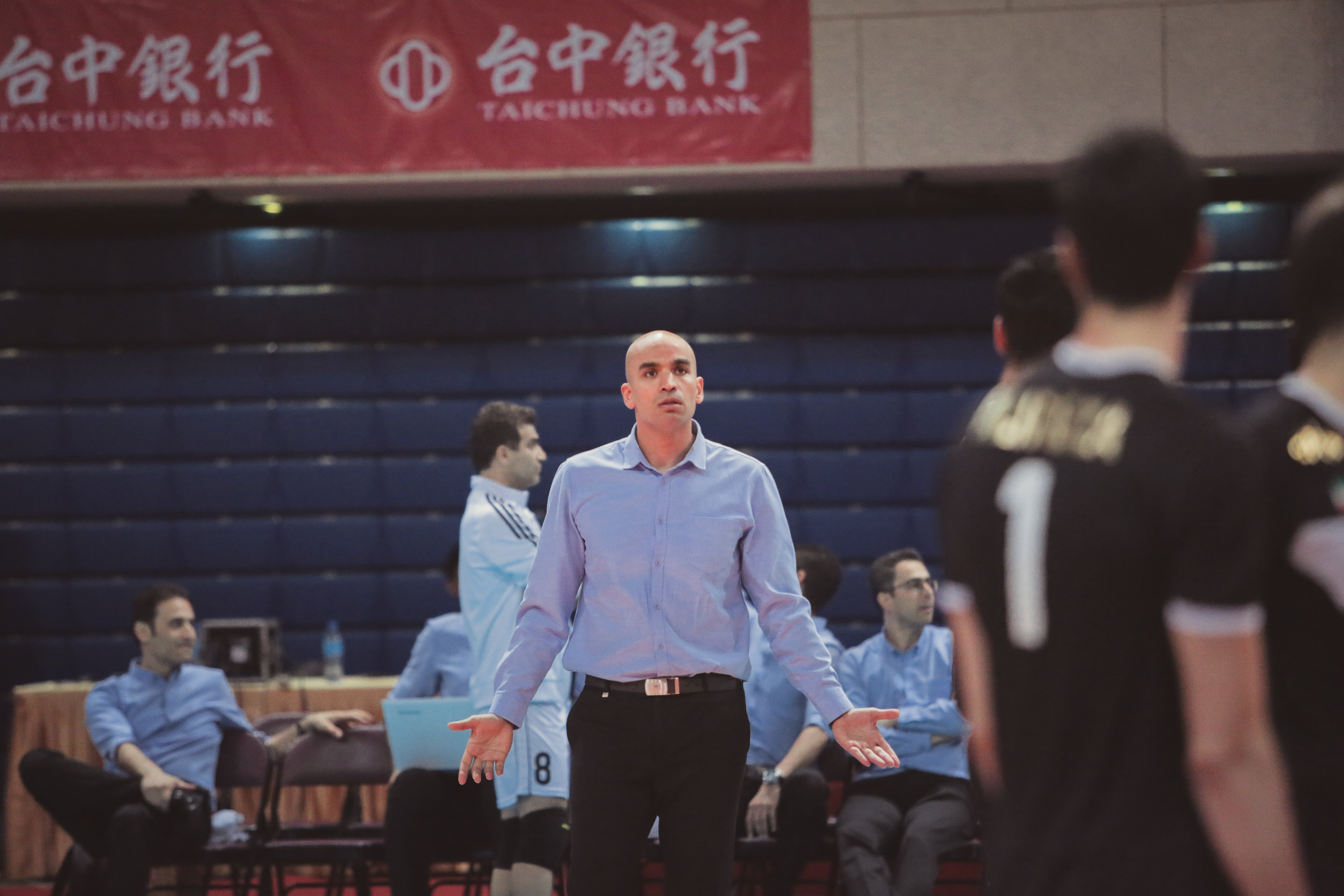 Varamin’s head coach Mohammadirad Rahman said, “It was a very difficult match, especially after the third set, they played well with good attacks. Their middle blockers did a good job in some moments, but we were successful in blocking them and then we had the net problem. At the beginning, we also made problems with service to their receivers and attacks and after that they started to make good reception and mid-court attacks.

“I think the challenge system made us very nervous. In our final against the Japanese, we hope to make a revenge against them because we played them once and lost to them earlier in this tournament. However, since the final is very important for us, I hope that we can win the final match. The Japanese team played well against Al-Rayyan and I think they are a strong team,” said Mohammadirad Rahman, adding that he has just become a head coach.

“I’m still young. Last year, I started working as head coach of this club. We took the championship in Iran and we are here for the first time, with me working as the head coach. I also used to be assistant coach for several occasions.”