Varamin, Iran, May 3, 2019 – A fantastic gala was held by Municipality of Varamin City to celebrate a significant victory their club team Shahrdari Varamin (Cultural and Sports Club of Varamin Municipality) had won at the recent Asian Men’s Club Volleyball Championship in Taipei, Chinese Taipei. More than 4,000 fans and some invited guests were present at Shahid Gol Abbasi Sports Hall, the main playing and training hall of the champion team. Many enthusiast fans were kept behind the closed doors since there was no empty chair and space even for standing inside the hall. A total of 14 strong teams participated in the 2019 Asian Men’s Club Volleyball Championship in Taipei. Shahrdari Varamin powered past India’s Chennai Spartans 3-1 in the semi-finals to set up a final showdown with Panasonic Panthers. In the April 26 showdown, the Iranian side recovered from the first two sets down to stun the Japanese powerhouses in hard-fought five-set thriller and take home gold medal and the Champion’s trophy.

Prior to participating in the auspicious ceremony, the team members paid a visit to the Mayor of the Varamin City, then from the Municipality Headquarters the volleyball team headed to the hall, place of Gala, on an open-top bus. When the team arrived at the spot, more than 10,000 Varamin’s volleyball fans were waiting for them in front of the entrance doors. The hall of Shahid Gol Abbasi is located in a corner of a big square which leads to four streets and beside the Gol Abbasi Hall locates a park adjacent to the hall. The hall was fully packed to its capacity. The Gala organizers had arranged 2,000 chairs for guests just inside the hall on the playing ground. More than 2,000 fans were sitting and standing in the spectators’ lounge at three sides of the hall. Actually, there was no an empty space even for standing one more person.

Captain led team players in neat and fashionable team suits in entering the hall, followed by technical staff. However, because of his father’s illness, Rahman Mohammadi Rad, head coach of the team, could not join the victory celebration. 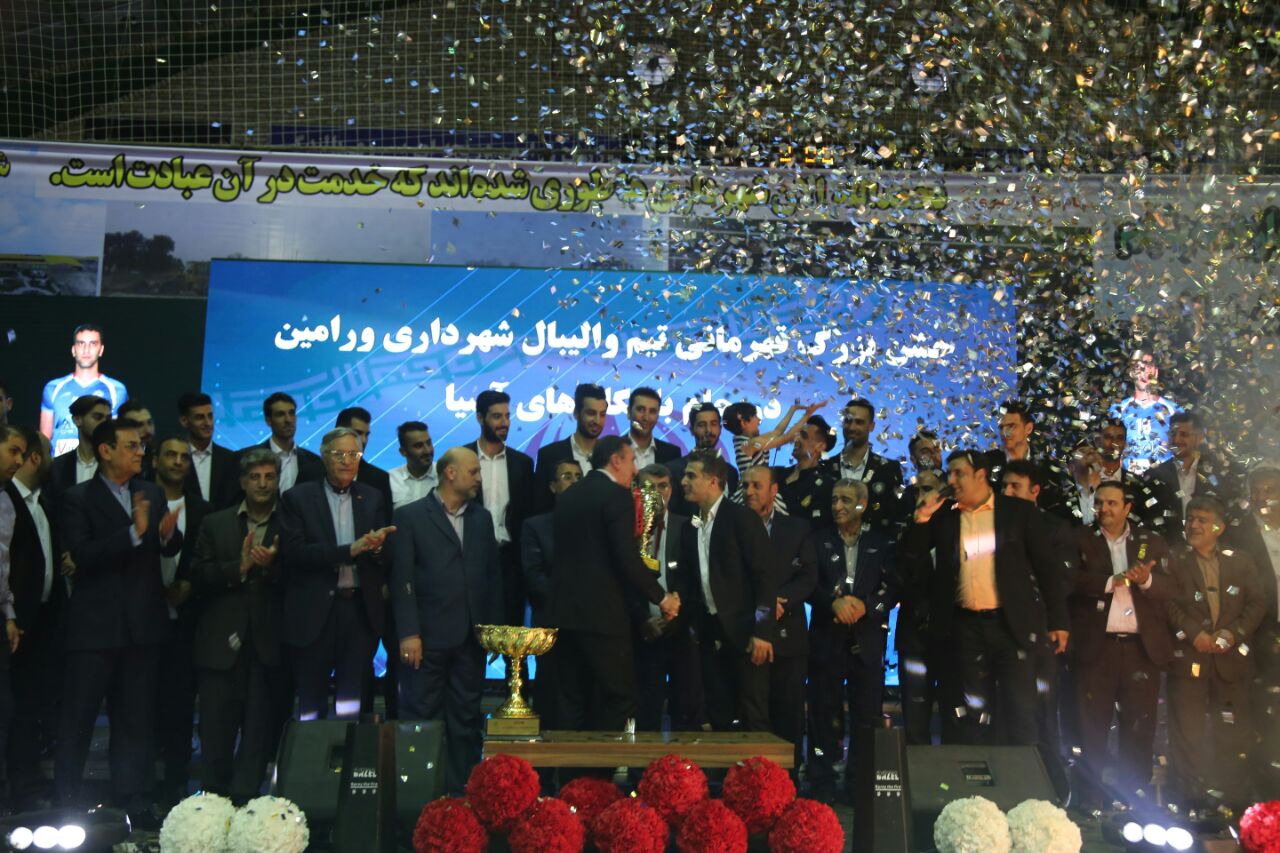 “All sports lovers with emotion and pride were cheering the team name, each player’s name, and we’re thanking them for once again to put Iran’s name to the highest level of Asian volleyball.

“ We honour the champions of our city because they were able to hoist up the tricolour national flag of our country in Asia, the championship is right of the people of this city, the team fairly fought and defended Iran’s volleyball. The coach of the Shahrdari Varamin by rejuvenating and taking young players into the team made a bold move, by  believing on the young forces he won the Asian Championship title, even he did not have the national team players in combination of his squad, but with the power and Iranian prejudice became champions of Asia.” Engineer Dehgan the mayor of Varamin City said in his appreciation speech. 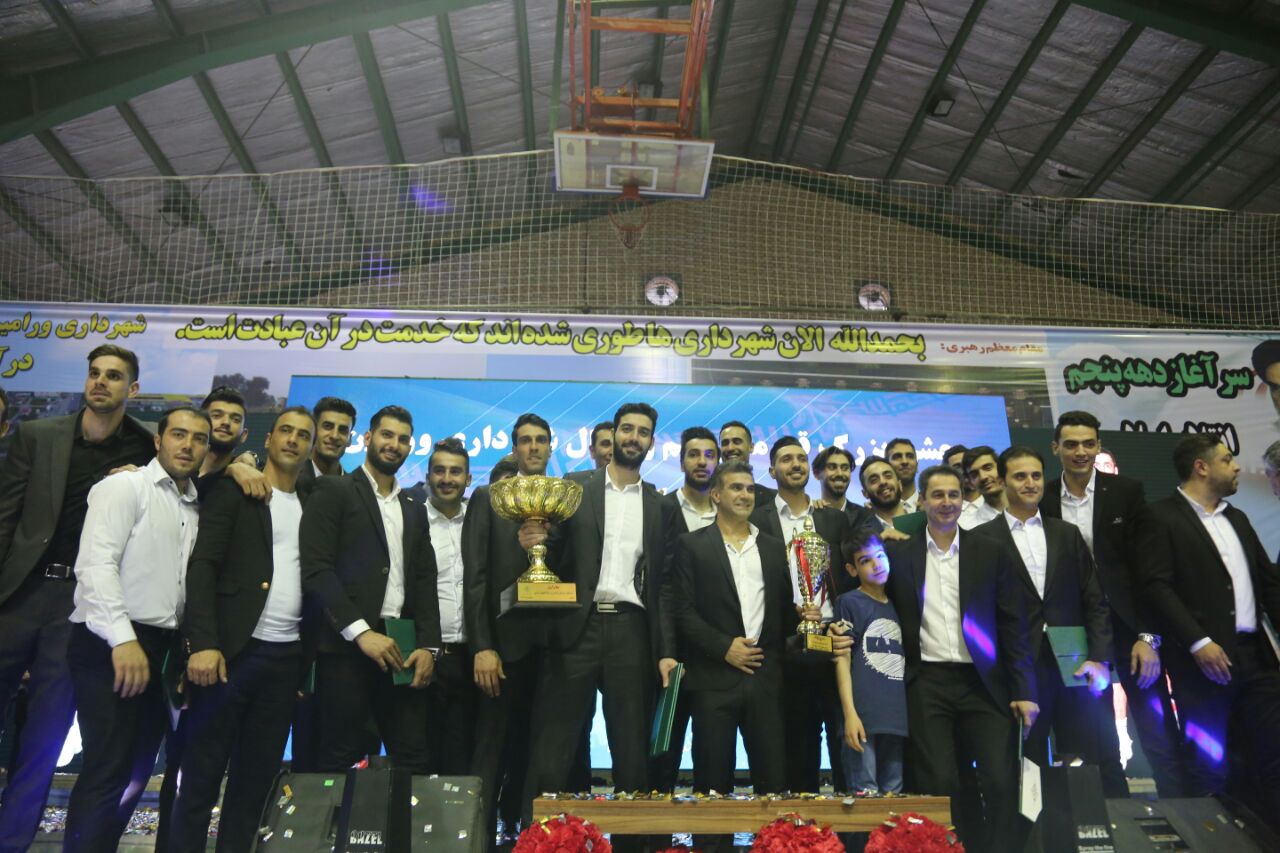 Speaking at the ceremony, Ahsanullah Shirkavand, the team captain and symbol of volleyball from Varamin City highlighted, “Now our city needs a big volleyball hall with 5,000 seating capacity. I hope the high ranking officials would consider establishing and building such a sports hall as an essential necessity for volleyball of Varamin City.

Mr. Afshin Davari Lotfabadi, the Interim President of Iran Volleyball Federation, gave his cooperation promise by saying, “Altogether it was a wonderful gala for the appreciation to all who have done hard work for a long time and their teams have captured two Championship titles. The first was the Iran Super League among local clubs and the second one is the precious Asian Men’s Club Championship. Good luck to all.”

They had gathered in the Shahrdari (municipality) Headquarters of the city to meet the Mayor of Varamin City. Then with an open-top bus, they moved towards the Shahid Gol Abbasi Hall which is the club’s traditional hall. A large number of 4,000 joyous volleyball fans stand up to greet their volleyball heroes as they entered the hall. Some were wearing the team’s T-shirt, among them, around 40 fans were wearing the jersey of the team captain, some were waving small Iran National Flags. They were shouting and cheering the Shahrdari Varamin team.