Said Garlick on the experience, “It was immensely satisfying to experience a high level of integration and engagement across the camp, from current to emerging Volleyroos, AVA athletes, coaches, scouts and VA staff”. The athletes did an amazing job of taking on new challenges presented to them each day and the evolution of the group across the two weeks reflected this”.

The camp’s main focus was to bring the greater squad together as a result of no competitive opportunities due to the Covid-19 pandemic. It was also a chance to integrate the Men’s Volleyroos with Volleyball Australia’s development program based in Canberra, the Australian Volleyball Academy (AVA).

The squad took part in various workshops including technical analysis, goal setting along with a few beach sessions at the indoor beach facility at the AIS. The squad was also able to share their own overseas and professional experiences with their younger AVA teammates, some of whom are hoping to follow in their footsteps and become future Volleyroos.

Volleyball Australia’s Athlete Wellbeing Manager, Gearoid Towey also joined the camp to catch up with the athletes. “I’m glad that we were able to touch base with our Men’s Volleyroos during the camp”, said Towey. “It’s really important that our athletes are being supported off the court, especially through these uncertain times”
.
Men’s Volleyroo Luke Perry reflected on the productive two-week camp, saying” It has been exciting to work with some really talented young guys who have a serious future in volleyball. I’m looking forward to seeing some of them join the Men’s Volleyroos in the next cycle”
.
Men’s AVA youngster Korben Phillips was lucky enough to train and play with the Volleyroos throughout the two-week period. Said Phillips, “Training with the Volleyroos was very inspiring and challenging, as the group was incredibly supportive and had high expectations which allowed my game to improve immensely during my time with them.”

Most of the Volleyroos group now head overseas to play for their respective club teams, with some athletes opting to remain in Canberra to continue to strengthen the development pathway with the AVA.

“I was also extremely happy for all of the VA staff, coaches and volunteers who, through the success of the camp, received absolute confirmation of being able to provide a high level, high quality daily training environment despite the current world circumstances”, added Head Coach Brendan Garlick.

“I also give my appreciation and thanks to the Senior Volleyroos and overseas based coaches whose input was instrumental in the success of this camp.”

FIVB PRESIDENT: “159 GRANTS APPROVED FOR OUR SPORT THROUGH OLYMPIC SOLIDARITY” 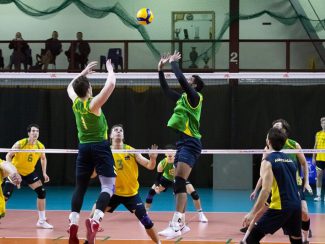