Canberra, Australia, January 17, 2020 – The head coach of the Australian men’s Volleyroos, Mark Lebedew, has confirmed that he won’t be continuing in the position.

The decision comes after the men’s Volleyroos fell short of qualifying for the Tokyo Olympics at the AVC Men’s Tokyo Qualification in Jiangmen, China last week.

Mark has been the head coach of the men’s Volleyroos for the Tokyo campaign since early 2017 alongside his full time coaching role with professional clubs in Europe.

“Being head coach of the national team has been an enormous honour, a massive responsibility, and the fulfillment of a lifelong dream. For the past three years that I have held the post, I have done everything in my power to do justice to the position, the stakeholders, and above all, to the team itself. Unfortunately, despite many minor successes along the way, at the final hurdle we were not able to achieve our goal of qualification for the Tokyo Olympics.”

Volleyball Australia President Craig Carracher says the sport is indebted to Mark for the contribution he has made; “Mark is one of the most cerebral and analytical coaches I have ever met and for Australian volleyball; the greatest coach we have ever had the privilege to claim as an Australian. I hope he agrees to play a major advisory role in our leadership group.”

Volleyball Australia is currently reviewing the Olympic campaign and the plans for the future will include recommendations about the head coach position going forward.

WHAT TO EXPECT AT SNOW VOLLEYBALL FESTIVAL: THE WORLD’S COOLEST NEW WINTER SPORT! 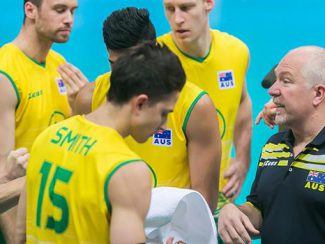