WHAT TO EXPECT AT SNOW VOLLEYBALL FESTIVAL: THE WORLD’S COOLEST NEW WINTER SPORT!

Lausanne, Switzerland, January 17, 2020 – This weekend, Snow Volleyball Festival will take over Bretaye, in the mountainous region of Villars-sur-Ollon, where everyone will have a chance to try out the new and exciting sport of snow volleyball.

What is Snow Volleyball Festival?

Snow Volleyball Festival is a celebration of the FIVB’s newest discipline and a great opportunity to try out this new winter sport.

From 10h00-15h30 on 18 and 19 January, families can take part in snow volleyball activities, meet volleyball champions, get up close to Olympic volleyball medals and, of course, have fun!

In addition, we will have a speed radar, to measure the speed of your serve, and a spike machine to help participants perfect their smash! If that’s not enough, the Snow Volleyball Festival team have set up a Batak machine, used by racing drivers and professional athletes to test hand-eye coordination, reflexes and stamina. Put yourself to the test!

Full schedule of the Snow Volleyball Festival can be found below

Which volleyball stars will be attending the event?

We have prepared some masterclasses and exhibition matches taking place throughout the weekend for you to participate and enjoy, with the volleyball superstar Gilberto ‘Giba’ Amauri Godoy Filho in attendance. The Brazilian, who won volleyball gold at Athens 2004, will be joined by London 2012 beach volleyball champion Julius Brink, Sydney 2000 gold and Atlanta 1996 volleyball bronze medallist Vladimir Grbic, Sydney 2000 and Athens 2004 volleyball silver medallist Elizaveta Bracht-Tishchenko and Austrian Snow Volleyball star Florian Schnetzer. Another familiar face to look out for is Cuban three-time Olympic gold medallist Mireya Luis.

Is snow volleyball difficult to play?

Not at all! Similar to the indoor and beach versions of the sport, anyone can play snow volleyball. They just need to be ready to have fun!

What are the rules of snow volleyball?

The rules are simple:
•    There are three players on each team (one additional player as a substitute)
•    Each team serves five times before the opposing team serves
•    There is a maximum of three touches before the ball must cross the net
•    A team wins a set by reaching 15 points first
•    The winner is the first team to win two sets
•    Typical matches last 20-25 minutes

What should I wear for Snow Volleyball Festival?

Warm sports clothing with a hat and gloves are advised for the snow volleyball court! Athletes wear football boots to give them better grip, but for Snow Volleyball Festival, trainers will be suitable. 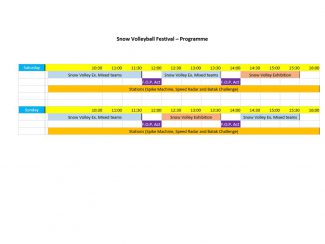 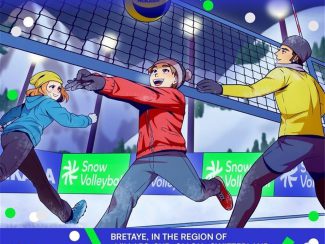