As a large crowd of spectators watched the event at the venue, Qatar S.C Academy won their Group A match against Al Salam 2-0, while Al Maha ended up as winners against the Elite team in Group B following a scintillating 2-0 victory.

Over 500 athletes are participating in the first edition of the QOC Beach Games, a legacy for all members of the Qatari society from the 2019 ANOC World Beach Games, which will be held over two weeks until January 3, 2021.

Participants are competing in four events namely beach football, beach handball, beach volleyball and 3X3 beach basketball, and the community activity is aimed at promoting beach sports in Qatar as well as encouraging individuals to more outstanding standards of health and physical fitness.

The country successfully hosted the maiden ANOC World Beach Games in Doha in 2019 with a large number of athletes from over 150 countries taking part. 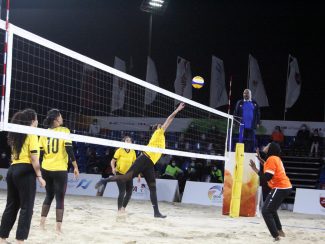