Bangkok, Thailand, May 11, 2022 – Following the great success of the recent Asian Women’s Club Championship in Semey, Kazakhstan, AVC is very proud to announce its second event of the year, the 2022 Asian Men’s Club Volleyball Championship, which is set to be held at the 12,000-seater Azadi Indoor Stadium in Tehran, Iran between May 14 and 20. 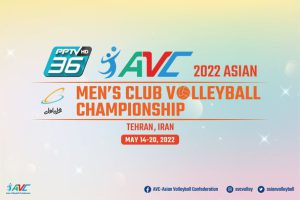 A total of eight club teams from six countries will test their mettle in the continent’s top-flight men’s club championship, vying for top honour and the lone berth up for grabs for the 2022 FIVB Volleyball Men’s Club World Championship.

All participating teams will play pool round-robin preliminaries from May 14 to 16 and after that, will be classified to respective rankings up to their performances in the pool plays.

May 17 is the rest day. The championship resumes the following day in the highly-anticipated quarterfinals, with the Pool winners taking on the fourth-ranked side in the same pool and the second-ranked team pitted against the third-ranked side.

The four winning teams will progress to the semifinals, while the losers will be relegated to classification round for 5th-8th places.

In the previous 21 editions, Iran ruled the roost with 15 titles, followed by Korea (2) and Qatar, Kazakhstan, China and Chinese Taipei one apiece. The 2020 edition was earlier due to take place in Thailand, but eventually cancelled due to grave concerns over the COVID-19 pandemic.

At the previous edition at Terminal 21 Hall in Nakhon Ratchasima, Thailand, Foolad Sirjan underlined their supremacy over the top-tier championship after 3-1 rout of Qatar’s Al-Arabi in the final showdown, while Kazakhstan’s Burevestnik Almaty powered past hosts Nakhon Ratchasima QminC in straight sets to take home bronze medal.

This year, the Asian Men’s Club Championship promises action-packed thrillers as talented players have been signed to strengthen potential teams. 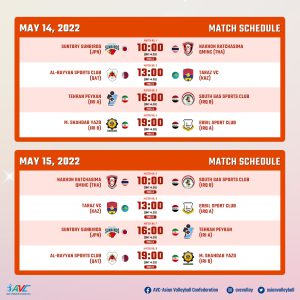 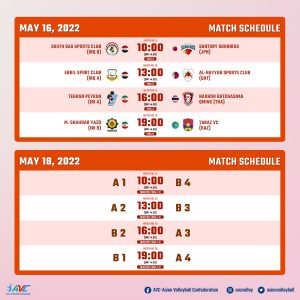 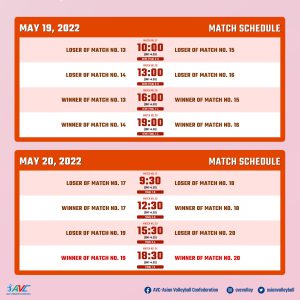 CONTROL COMMITTEE MEMBERS, LOCAL ORGANISERS IN JOINT MEETING AHEAD OF ASIAN MEN’S CLUB CHAMPIONSHIP IN IRANWOMEN’S VOLLEYROOS BACK TOGETHER WITH ASIAN CUP IN THEIR SIGHTS