Australian players are leaving their mark on the Women’s Swedish Volleyball League (‘Elitserien’) as three of our Women’s Volleyroos led their side Linköping Volleyball Club (LVC) to a historical semifinal berth after another convincing playoff win on Sunday.

It was a special moment for Stef Weiler, Caitlin Tipping and Tessa Browne, who have played a crucial role in their club’s best season ever under the guidance of another Aussie, head coach Andrew Strugnell.

“We have come so far this season, as a team and as individual players,” said Weiler, who is currently leading the final series with a perfect/positive passing of 67%.

“The Swedish league has become very competitive over the last couple of years, and has been the perfect level to grow as a player. My game has statistically improved out of sight, and I’m excited to continue this into the remainder of our final series,” she said. 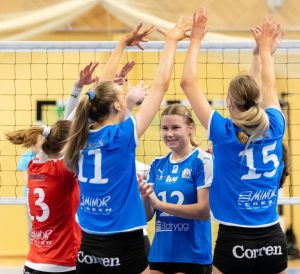 LVC’s success comes off the back of their impressive defence – the team is currently the best in the League for blocking, with Tipping and middle-blocker Browne establishing themselves as dominant forces at the net and contributing respectively 0.82 blocks per set (second in the league) and 0.76 blocks per set (fourth overall). Tipping was the best scorer of the league in the regular season, with Weiler also in the top 10.

Having joined her Volleyroos teammates in January, Browne was impressed by their enormous improvements and by the level of the team overall.

“Getting to play alongside new teammates and friends and work through the highs and lows as a team is one of my favourite parts of this whole experience,” she said.

“[In the last couple of months] I have found my way as a middle and really connected with the team. I’m really looking forward to the upcoming finals series and I can’t wait to have more success with this amazing team.” 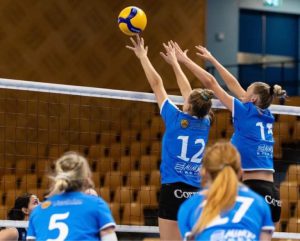 The three Aussies will face a tough challenge in the semifinal as they will be playing the top team on the ladder, Hylte/Halmstad, a side which has reached the League Final five times in the last 10 years and won the title in 2014.

“Hylte/Halmstad have been undefeated this season, so we are looking forward to this difficult but great challenge,” said Weiler, who took the time to also recognise the importance of their head coach’s contribution to the team’s success.

“Struggs was definitely an integral part of this achievement. When he was in Linköping last [between 2012-2016], he was leading the men’s side and developed many Australian players who came through LVC. In fact 5 of the starting 6 players at the London Olympics for the Men’s Indoor team came through Linköping Volleyball Club under his development.

“We feel very lucky to have his guidance and support over here, as this result and our development so far wouldn’t have been possible without him,” Weiler said.

Regardless of the semifinal outcome, the three Volleyroos have already written their names in the club’s history book, gaining precious experience in the process as they get ready for the Asian Cup in August.

“Indeed this has been an invaluable experience,” said Tippin. “We’ve not only improved individually, but we’ve grown exponentially as a team. It’s been a great level of volleyball to develop technically and mentally, and I’m just very grateful for this opportunity,” she said.

The Elitserien’s semifinal kicks off on Sunday 3 April, with the contest to be decided in a best-of-five series over two weeks.