WORLD’S BEST U21 TEAMS GET TOGETHER IN ITALY AND BULGARIA

FIVB U21 Men’s World Champs to take place in Sofia, Cagliari and Carbonia from September 23 through October 3

With 16 teams participating, the FIVB Volleyball U21 Men’s World Championship 2021 is set to take place from Thursday through October 3 at three venues in southern Europe. Sofia, the capital of Bulgaria, will welcome the matches in two of the pools in the first stage of the tournament. The cities of Cagliari and Carbonia on the Italian island of Sardinia will host one pool each.

Cameroon and Canada are scheduled to go against each other in the World Championship opener at the Levski Sofia volleyball hall in Bulgaria at 10:00 local time on Thursday. The other two teams in Pool D are from the two most decorated countries in the history of the competition, Russia (10 gold, 2 silver and 4 bronze medals, including those of the Soviet Union) and Brazil (4, 6, 4). The Russian selection also arrive in Sofia as finalists of the U19 World Championship two years ago in Tunisia.

Two of the other four teams that have ever won the junior world title, three-time champions Poland and co-hosts Bulgaria, are in the company of Cuba and Bahrain in Pool B, also to be played in Sofia. 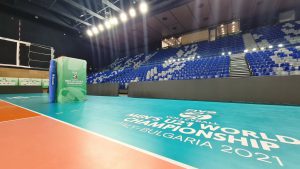 Pools A and C in Italy will get underway simultaneously, at 16:00 local time. Czechia and Egypt will be the first teams to take to the court at the Pirastu hall in Cagliari. Three hours later, the other two squads in Pool A, Thailand and co-hosts Italy, will join the action. Italy have never won this competition (four silvers, most recently in 2019, and two bronzes), but this generation of Italian players triumphed with the world title at the U19 World Championship two years ago.

Argentina, 2019 U19 World Championship bronze medalists, and defending U21 champs Iran headline Pool C in Carbonia. The South Americans will start their campaign at the Palazetto Dello Sport competition hall with a match against Morocco. Belgium will challenge Iran. 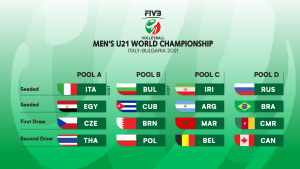 The round-robin tournaments in the pools will unfold over three competition days. The pool winners and the pool runners-up will continue their quest for the medals in two new pools, while the remaining eight teams form two other pools to fight for the distribution of the places from ninth to 16th. The matches in the four second-round groups will take place from September 27 through 29 and the pool standings will distribute the participants further into semifinal fixtures within the four different classification levels in the final standings. The title, the rest of the medals and all remaining positions in the final standings will be determined on the last competition day on October 3.

It will be the 21st edition of the U21 World Championship and the first co-hosted by two countries. The previous 20 editions were held from 1977 through 2019. Bulgaria is a first-time host of the tournament, while Italy welcomed the world’s best junior teams back in 1985.

The first MVP award in the competition was handed in 1995 to legendary Brazilian Giba. The list of more recent MVP nominees includes current volleyball stars like Victor Poletaev, Pavel Pankov and Jakub Kochanowski.