Reigning Olympic champions China recovered from the first set down to stun Brazil in exhausting five sets, as talented Zhang Changning bagged 36 points for her second entry on the list of players to have scored 30 points or more in a single match at the 2021 FIVB Women’s Volleyball Nations League in Rimini, Italy on Tuesday. China, which fielded a second-string squad in early stage of the top-tier competition and had already suffered five losses including four in a row, made a sluggish start to go down 18-25 in the first set, but bounced back to win the next two sets 25-22, 25-20 for a 2-1 advantage. The Brazilians did not give up easily as they pulled their game together to clinch the fourth set 25-14, forcing a tie-breaker. However, China came up with superb form, foiling the tough rivals’ strong challenge to win the thrilling decider 15-12 and the 144-minute match. 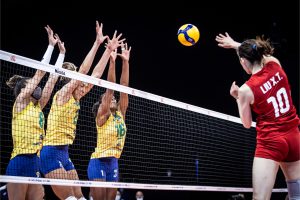 Brazil’s Carol Gattaz said at the virtual mixed zone: “It was a good, but difficult match. Today Zhang again made a difference, but it’s also good for our team, because we can learn from our mistakes and eliminate them ahead of the next games. It’s hard to lose a match, it’s tough. But I think now we have to do our best as a team to find out what we can still improve and work on it.” China’s Zhang Changning said: “I’m very excited about this victory over Brazil. Despite some difficulties we managed to do something that we wanted to do. The entire team worked for this victory, it’s a team victory. In every skill – block, defence, spike, serve – we did our best to gain this victory.” 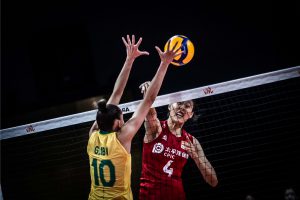 SARINA KOGA: “WE WERE A UNITY”VOLLEYBALL WORLD WELCOMES MAGNIFLEX AS VNL 2021 NATIONAL PARTNER