Lausanne, Switzerland, June 2, 2019 – Reigning olympic champions China have not always performed to par this season, but they’re still experimenting around with their team – and being assured of a spot in the final of the 2019 FIVB Women’s Volleyball Nations League as hosts of the Final Six from July 3 to 7 in Nanjing, they can afford to do so.

China also obviously have one eye focused on the Olympic qualifiers August 2-4, when they host Turkey, Germany and the Czech Republic for one ticket to Tokyo 2020 where they’ll be looking at replicating their triumph of Rio 2016.

Integral to their efforts this season, which also include the 2019 FIVB World Cup, September 14-29 in Japan, is 23-year-old outside hitter Zhang Changning, who believes that the tasks ahead both put the pressure on China but also provide motivation.

“These tournaments are very valuable,” she says. “We are always trying our best to get ready for them and we remain committed to each game.”

But according to Zhang, who hails from a family very much involved in the sport, it’s all about adapting. With the VNL now under way, coaches across all teams have been shifting things around in their quest to find the combinations that work best for their team.

“It is all about our adaptation,” says Zhang. “There might be the emergence of new teams and players each year, but this just means we have to learn more and adapt better.”

“From our side, we are still adjusting our starting line-up and we also hope to pinpoint our problems and enhance our skills. We can not be an all-round team at this moment, especially concerning some minor skills. I think there is still a lot of room for improvement, and we will continue to get better in the future matches.”

China currently sit in sixth position in the 2019 Women’s VNL ranking after two weeks of play, with four wins and two losses. They play hosts to Italy, Japan and the Netherlands in Pool 9 in Hong Kong from June 4 to 6. 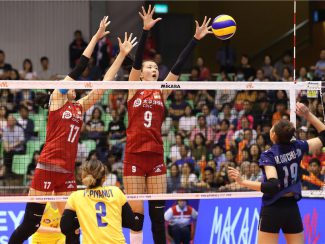