Bangkok, Thailand, September 16, 2022 – A mini volleyball festival, hosted by the Bridge Academy School and under the auspices of the Jerusalem Suburbs Education Directorate and the supervision of the Sports Activities Department, was held with 200 young students from the school, male and female, taking part. 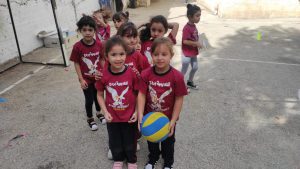 In keeping with Volleyball Your Approach motion, created by FIVB to have fun volleyball in all its shapes and types no matter how it’s performed, a mini volleyball festival took place lately in Palestine with goals of highlighting the inclusivity and universality of volleyball and making the game an enjoyable, entertaining sport for all.

The fun activities began with a review of the participating students, then small games, interspersed with competition and an element of suspense. School students were divided into groups and playgrounds for the specific age groups. During the game, distinguished skills appeared in performance that fit the level of volleyball for young age groups. 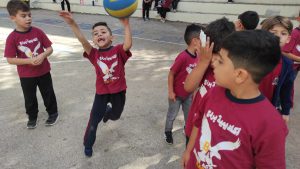 At the end of the activity, Mrs Bayan Al-Qumairi, Director of the Bridge Academy School, thanked the Directorate of Education in the outskirts of Jerusalem, represented by the Director General of Education, Professor Essam Ezzat, the Student Activities Department, and the faculty for the effort exerted in raising the level of students in all methodological and extracurricular aspects. 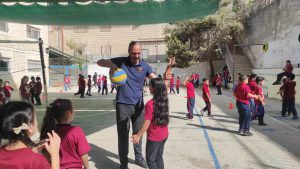 Rani Asfour, the supervisor of sports activities in the directorate, also thanked the school administration and praised the efforts of the physical education teacher, Mrs Nahid Waridat, for her continuous and diligent work to raise the level of students in terms of education and physical through sports activities. He also thanked the efforts of the kindergarten director, Sister Fatima Allan, who learned about her work in organizing events and provided the necessary requirements for the success of this activity. 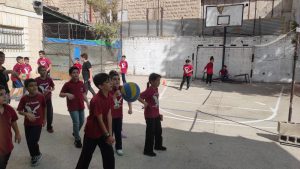