23rd AVC GENERAL ASSEMBLY TO BE HELD ONLINE ON OCTOBER 26

A physical meeting is held during the 22nd AVC General Assembly in Bangkok, Thailand in November, 2017

Bangkok, Thailand, October 25, 2020 – In light of the complexities of international travel and in-person gatherings due to the COVID-19 pandemic, the 23rd AVC General Assembly will be held online on Monday particularly for electing the new AVC President.

The physical Assembly was first due to be held in Bangkok in June, but has to be postponed due to the coronavirus outbreak and in accordance with the new dates for the FIVB World Congress, which was rescheduled for January 27-29, 2021 in Phuket, Thailand.

Taking the FIVB’s timeline into consideration for further decision, AVC had thus planned to hold the 23rd edition of its General Assembly on October 15, but due to the evolving situation of the global pandemic, the AVC Board of Administration Members have decided in their meeting online on October 9 that the 23rd AVC General Assembly, the elective conference which will play a vital role in shaping the next four years of the Asian volleyball, will be held via videoconference on Monday, October 26.

In its endeavour of meeting its duty of ensuring the Assembly is equally accessible to all members, the Lumi System, suggested by FIVB, has been set up to support the effective run of the Assembly, due to start from 2pm Bangkok time (GMT+7).

AVC Secretary-General Mr Shanrit Wongprasert revealed that all is set for the 23rd AVC General Assembly on Monday. However, despite the fact that all 65 AVC Affiliated National Federations have already confirmed their attendance in the conference, the online gatherings can be determined a success based on availabilities of the members on Monday and the function of online system that day.

“Apart from election of the new AVC President and Board of Administration Members, the Minutes of the previous AVC General Assembly in Bangkok in November 2017 as well as decision of the AVC Board of Administration Meeting on October 9 and AVC Internal Auditor will also be performed on approval. Activities and competitions in the previous years, the current situation of AVC and AVC Financial Report will also be matters for consideration,” Shanrit explained.

According to the working files of the 23rd AVC General Assembly and relevant information AVC Headquarters has circulated to its BA Members and all AVC Affiliated National Federations earlier, since Mrs Rita Subowo, current AVC Executive Vice President, is the sole candidate for the AVC Presidency, the method of the election will be by acclamation.

AVC Board of Administration Members will also be elected during the Assembly, but as there are only two candidates to fill the required two positions for female members of AVC BA, the election for the positions is unnecessarily needed.

Moreover, relevant matters such as future plans and activities as well as updated information are likely to be raised for discussion and decision in the 23rd AVC General Assembly. 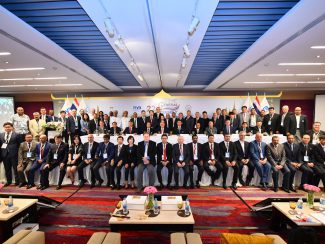