Quang Ninh, Vietnam, May 12, 2022 – As the official kickoff of the 31st Southeast Asian Games Volleyball Tournament is just one day away, the organisers on Thursday conducted relevant activities in final preparation for the action-packed, 10-day event at Quang Ninh Gymnasium here.

On a day when the caldron of the 2021 SEA Games was lit into flame at My Dingh National Stadium in Ha Noi on May 12 to mark the official opening of the region’s biggest biennial sports extravaganza, the final preparation for the SEA Games Volleyball Tournament was in full swing on Thursday.

All participating teams arrived in Quang Ninh, ready to kick off their SEA Games campaign on May 13 with their sights firmly set on striving for their success in the top-flight tournament aside from fostering regional cooperation and multilateral relations among 11 SEA countries.

Referees officiating at the 31st edition attended the technical volleyball clinic at the Quang Ninh Gymnasium on Thursday, designed to improve their skills and position ahead of the actual competition between May 13 and 22. Rules of the Game as well as technical instruction and feedback combined with lots of repetitions had been reviewed through practical sessions with two Vietnamese club teams invited to compete on site as if they were playing in real situations. This was held for those referees in order that they will do their duty with the very best of their ability during the intense SEA Games competitions.

The Volleyball Information System (VIS), used to calculate points scored for individual skills of players and teams based on performance assessment programe, and reporting system had been properly installed and thoroughly checked for comprehensive functions. 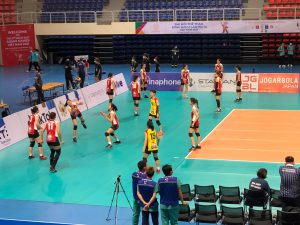 In addition, regarding the safety protocol for technical officials at the competition venue, safety measures will also be conducted including elimination of handshakes before and after the match and ensuring the team’s flow of the court switch after each set to avoid crossing the opponent team.

All activities ended on a high note, with the learning skills from the Thursday’s technical volleyball clinic expected to be effectively transformed into real actions on competition days from May 13 onwards.

Meanwhile, seven teams have been confirmed for the men’s event in the SEA Games Volleyball Tournament. Powerhouses Indonesia, hosts Vietnam, Malaysia and Myanmar are in Pool A, with Pool B comprising Thailand, Philippines and Cambodia.

The pool round-robin preliminaries commence on Friday, May 13, with Indonesia starting their title defence in the opening clash against Myanmar.

After the preliminaries, top two teams from each pool will advance to the cross semifinals, with the Pool A winners taking on the Pool B runners-up and the Pool B winners fighting it out with Pool A runners-up. The two winning teams will set up the final showdown to vie for the Games crown, while the two losers battle it out for the bronze medal.

After the preliminaries, top two teams will make the cut for the highly-anticipated showdown, with the teams finishing third and fourth places fighting it out for the bronze medal.

On May 13, the first day of the women’s competition, Malaysia will take on Philippines in the curtain-raiser, while the second match sees Indonesia meet hosts Vietnam. 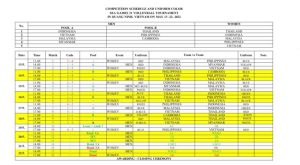 MOHAMMAD DAVARZANI: TO BUILD UP A COMPETITIVE SENIOR NATIONAL TEAM IT IS IMPORTANT TO START FROM THE JUNIOR LEVELCONTROL COMMITTEE MEMBERS, LOCAL ORGANISERS IN JOINT MEETING AHEAD OF ASIAN MEN’S CLUB CHAMPIONSHIP IN IRAN