The clash was held amidst strict precautionary and health measures to ensure the safety of team players and officials from COVID-19.

QVA President Mr.Ali bin Ghanem Al-Kuwari congratulated Al-Arabi on their remarkable success and runners-up Al-Ahli on their  wonderful performance in the tournament and the final match in particular.

The tournament was concluded, and through it Al-Arabi were able to capture the title well-deservedly. He was delighted to learn that the competition was a fitting end and he witnessed an exciting rivalry between the two teams’ professionals in the showdown.

Until QVA has completed the most expensive Cup competitions, he  described the current season as successful despite the suspension of sports activity due to the COVID-19 pandemic. 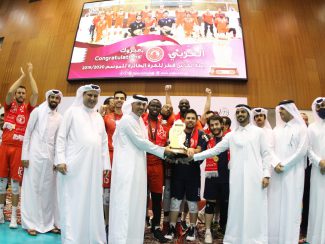