Bangkok, Thailand, October 16, 2020 – Al-Gharafah and Qatar have captured the top spots in respective Group A and Group B in the 42nd edition of His Highness Amir Cup for the 2019-2020 season from October 8 to 30, Qatar Volleyball Association said in its news release on volleyball.qa on Tuesday.

With this victory, Al-Gharafah led Group A with a total of 5 points including the first three points achieved in their first match against Al-Shamal in straight sets 25-12, 25-18, 25-11.

In the quarter-finals, Group A winners Al-Gharafah will challenge League runners-up Al-Arabi, while Group A second place Al-Wakrah will take on League third place Al-Rayyan.

Meanwhile, Qatar had a tough encounter against Al-Khor to beat the strong rivals in hard-fought three-setter 27-25 26-24 25-22 in Group B.

Group B winners Qatar will play League fourth place Al-Ahli in the quarter-finals, while Group B runners-up Al-Khor will take on League champions Police. 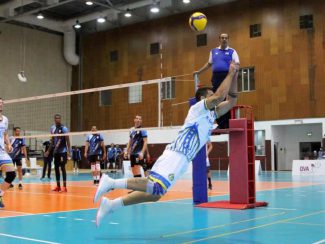