Apia, Samoa, July 12, 2019 – Australia and Vanuatu reigned supreme over the Pacific Games beach volleyball competition at the Apia Waterfront on Thursday, with the former beating Tahiti in the thrilling showdown to capture the men’s title.

In a hard fought, 3-set gold medal final in the men’s competition, it was difficult to split Australia and Tahiti.  Australia (Marcus Ferguson / Tim Dickson) got off to a great early start taking the first set with some determined attacks. Tahiti (Terau Ena/Jeremie Paraue) came up with gutsy display to take the game to the Australians, with the second set a tight tussle throughout, and the Tahitians getting the better of the Australian pair to tie the game.  The third set tie-break saw the Australians jump to an early lead, and then require a Medical Time Out. From then on, it turned out to be a see-saw battle, with Australia in good run to take the gold medal.

This was on the back of a cracker Bronze Medal match where Tonga (Semisi Funaki / Tio Fonohema) and American Samoa (Sigalu Aitui / Tauvela Fagaima) desperately tried to find a way through each others defense.  Lasting just over one hour of attack and counter-attack, TGA held out to take the third set and the Bronze Medal. Tonga were victorious 24:22, 19:21, 19:17.

In the women’s event, Vanuatu came into the Pacific Games as the reigning VAN2017 Mini Games Champions and left with gold once again. Vanuatu (Miller Pata / Shersyn Toko) were just too good in their attacks and were able to respond to all of the Tahitian attempts to dominate play.  Miller showed her experience in the way she was able to provide opportunities for Shersyn to dominate the net. Vanuatu won in straight sets 21:12, 21:18.

American Samoa (Litara Keil / Debeney Pula) dominated the Solomon Islands pair (Rose Gwali / Hanna Donga) to win the bronze medal in just under 30 minutes.  The ASA women were just too powerful and dominated the match from start to finish. 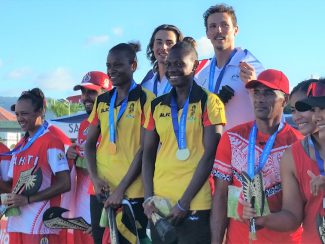