Daegu, Korea, July 11, 2019 – Laura Condotta and Anna Dunn-Suen were one of four teams that reached the main draw on Thursday after the qualifying rounds marked the start of the women-only 1-Star Daegu FIVB Beach Volleyball World Tour event.

It is the third consecutive season in a row that Daegu has hosted a World Tour tournament and it will run from July 11-14 with US$5,000 on offer to the winners.

The Canadian pair beat Singapore’s Eliza Chong and Gladys Lee 2-0 (21-18, 21-17) to reach their second main draw in their second World Tour tournament together. 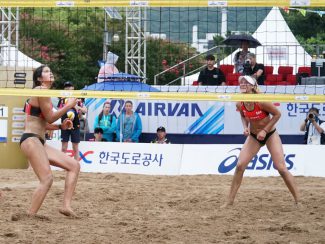