Bangkok, Thailand, November 1, 2019 – It is going to be a very busy year in 2020, with the sporting world descending on Tokyo for the Games of the XXXII Olympiad and Asian national volleyball teams strutting their stuff in international tournaments including eight AVC Championships.

AVC has recently released 2020 calendar for indoor volleyball competitions, promising thrills and spills for both participating players and spectators.

The Olympic year will kick off with the AVC Men’s Tokyo Volleyball Qualification 2020 in Jiangmen, China from January 7 to 12 and the women’s qualification event in the same period in Nakhon Ratchasima, Thailand.

In terms of Asian teams, Japan has secured their berth as the Olympic host country (one team per gender), while China celebrated their Olympic qualification through the FIVB Volleyball Women’s Intercontinental Olympic Qualification Tournament 2019 Pool B in August on home soil in Ningbo.

After conclusion of AVC Women’s Tokyo Volleyball Qualification 2020 in Nakhon Ratchasima, the Thailand’s northeastern province will next host the 2020 Asian Men’s Club Volleyball Championship between April 18 and 26, which serves as the year’s first Championship to be organised by AVC. The Tournament will be held in Thailand for the first time in 20 years after it took place in Suphan Buri, a province in the central part of Thailand in 2000 when hosts PTT Club finished the country’s best-ever fourth place in the competitive competition.

Meanwhile, Manama, Bahrain will host the 13th Asian Men’s U18 Volleyball Championship during July 7 and 15, with Nay Pyi Taw, Myanmar organising the 2020 AVC Cup for Men between August 22 and 30.

In addition, Zhangjiagang, China will host the Eastern Asian Women’s Volleyball Championship between July 14 and 19.

Apart from the eight AVC Championships, the FIVB, the world’s volleyball-governing body, also released a 2020 calendar draft, allowing some leading Asian teams chances to test their mettle in the FIVB-sanctioned tournaments.

The FIVB events will start the busy year with the Men’s and Women’s Tokyo Volleyball Qualification 2020 in all five continents (CAVB, CEV, AVC, CSV, Norceca) in January. Only the eventual winning teams (men’s and women’s) from each continent will be eligible for the Tokyo 2020.

Following the Test Events, the third edition of the FIVB Volleyball Women’s Nations League and the FIVB Volleyball Men’s Nations League, an annual international women’s and men’s volleyball tournament contested in a single round robin by the world’s 16 leading teams, will be held in various continents, with the women’s event taking place from May 19 to July 5 and the men’s division between May 22 to July 5. Four teams from Asia – China, Japan, Korea and Thailand have secured their places in the 2020 VNL for Women and China, Iran, Japan and Australia have booked their berths in the 2020 VNL for Men.

The VNL will be followed by the Olympic Games in Tokyo, Japan from July 25 to August 9, with well-qualified 12 teams in each gender chasing their ultimate Olympic dream. 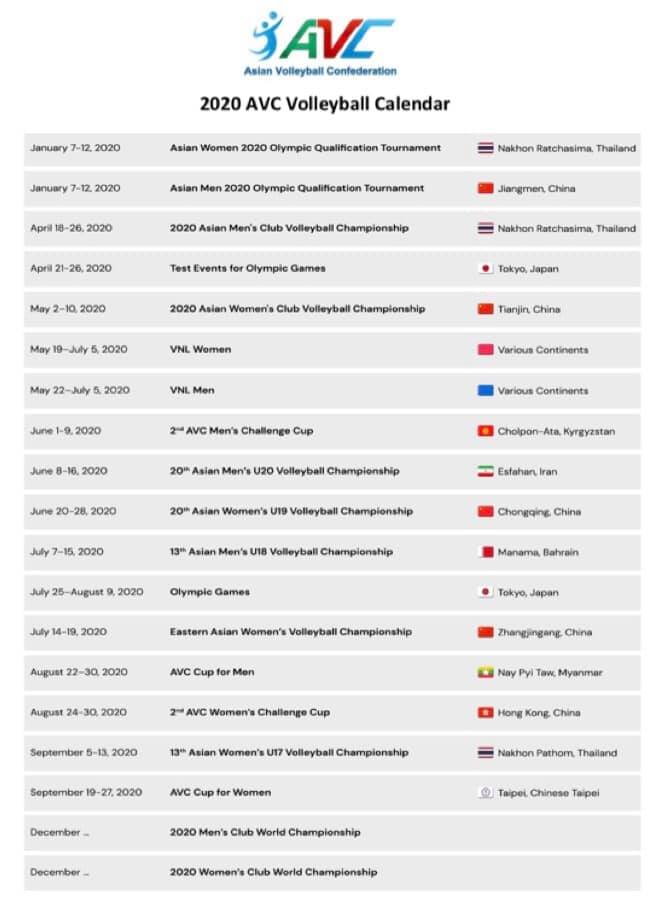 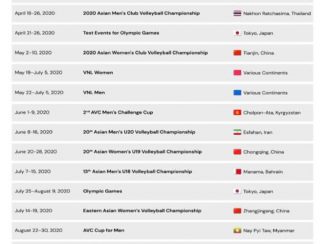 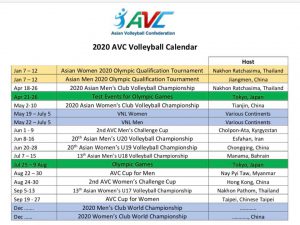 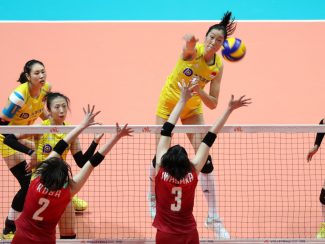