Bangkok, Thailand, February 27, 2022 – Due to an ongoing global outbreak of coronavirus disease 2019 (COVID-19) fuelled by the Omicron variant, AVC hits a snag on organising 2022 beach volleyball tournaments with some AVC Beach Tour events clearly poised to be rescheduled.

However, despite the fact from reliable sources of health information that we’re not going to totally eradicate COVID-19, it is likely that we will see it soon move out of the pandemic phase and into the endemic phase. The Omicron variant has actually forced a wave of new postponements heading into 2022, but AVC, in an effort of seeing action-packed beach volleyball events happen, has tentatively released its 2022 Beach Volleyball Competition Calendar.

Thanks to kind cooperations from affiliated National Federations, AVC has its sight firmly set on all events to be soon put in the right place at the right time in order that participating players and teams will be well-prepared to compete and strive for success in each event.

After continuous iterations for rescheduling of some Asian Beach Tour events, AVC has launched the tentative calendar, providing interested players and teams from affiliated National Federations opportunities to seek the availability and submit their entries from now even though some tournaments still need to be determined for either the candidate host or the exact competition dates.

The Western Asia Beach Volleyball Qualification Tournament (Men) between January 1 and 3 in Doha, Qatar and the Sri Lanka-hosted 1st CAVA Beach Volleyball Championships in Negambo from February 18 to 20, had been held successfully in 2022.

After the aforementioned first two events, the next beach volleyball competition in Asia is likely to be the AVC Beach Tour Samila Open (Men & Women) in Songkhla, Thailand between April 14 and 17, followed by the beach volleyball event in the 31st Southeast Asian (SEA) Games, a biennial international multi-sport event involving participants from 11 countries in Southeast Asia. The sports extravaganza is due to be held in Vietnam between May 15 and 20.

After that, Italy will play host to the FIVB Beach Volleyball World Championships in Rome between June 7 and 19, 2022, while Saipan, the largest island of Northern Mariana Islands known for its sandy shores and mountainous landscapes, will host the 2022 Pacific Mini Games, in which the beach volleyball competition has also been included.

The next AVC beach volleyball event is due to be held in Penghu, Chinese Taipei, where the AVC Beach Tour Penghu Open (Men & Women) will take place from July 27 to 31, while China will play host to the 19th Asian Games in Hangzhou between September 10 and 25 and the beach volleyball competitions for both men’s and women’s events are due to be organised from September 11 to 20.

Although the competition dates have yet to be exactly confirmed for the AVC Beach Tour Master for Men, one thing to be sure of is that Iran will host the region’s top-flight tournament in either October or November, the same period when the 2022 Asian Senior Beach Volleyball Championships (Men & Women) will take place, with the candidate host yet to be confirmed officially. 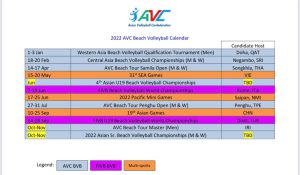