CAVA PRESIDENT MOHAMED LATHEEF ON HIS OFFICIAL TRIP TO NEPAL 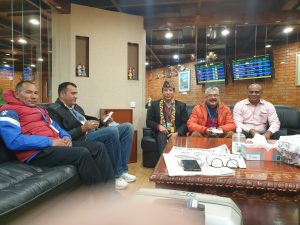 On the same day, CAVA President Latheef, accompanied by Jitendra Bahadur Chand, flew to Porkhara, and received a warm welcome at the Airport from Mr Narayan Prasad Sharma, Chairman of the Tiger Group of Porkhara. Latheef has been invited as a special guest by the Nepal Volleyball Association to attend the Grand Finale of 2nd Tiger Cup Invitational Volleyball Tournament organized by the Tiger Group of Porkhara Nepal in association with NVA. The competition is played with five top teams in each gender of Nepal vying for the top honours. National team players from Sri Lanka and India are also playing in the competition. The tournament has become a very special tourist attraction in Nepal as an average 1,800 spectators have attended the venue to watch thrilling matches daily despite COVID-19 pandemic. Participating teams play round-robin preliminaries, with the first and second teams in each gender advancing to the gold-medal match and the 3rd and 4th places fighting for bronze. All finals are due to be contested on January 15, 2022. In this visit, Latheef will be meeting with the stakeholders of Nepal with Nepal Volleyball Association. The CAVA President will mainly discuss the development of volleyball in Nepal and AVC Central Zone as a whole. In addition, he will discuss introduction of professional beach volleyball in Porkhara where he has seen a great hope for the game. These meetings will pave the way for stronger, more sustainable development of volleyball in the Central Zone. On this occasion, CAVA President Latheef attended some matches and had witnessed a lot of hope, tremendous development and high expectations in Nepal volleyball.