In less than nine months’ time, the Netherlands and Poland will welcome 24 of the world’s top women’s national teams for the FIVB Volleyball Women’s World Championship 2022 on 23 September – 15 October 2022.

The competition will feature powerhouse teams from all corners of the globe, including defending world champions and Olympic Games Tokyo 2020 bronze medallists, Serbia, Tokyo 2020 and Volleyball Nations League (VNL) 2021 champions, the USA, and Olympic silver medallists, Brazil. But there is no doubt these teams will face tough competition with a line-up that includes strong volleyball nations such as China, Italy, South Korea, Turkey, hosts the Netherlands and Poland, among many others. Meanwhile, the Colombia women’s national team will make their debut in the competition. 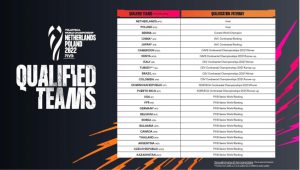 Both the Netherlands and Poland have world-class hosting credentials. Poland has previously hosted a number of volleyball events, including VNL action and, of course, the 2014 edition of the FIVB Volleyball Men’s World Championship. A new standard of sports presentation was introduced by the FIVB at this event, and an incredible 62,000 fans attended the opening match which to this day remains the volleyball World Championship attendance record. 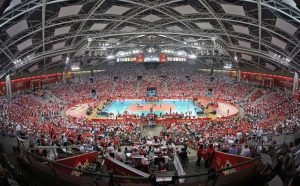 2022 will mark the first time in history that the Netherlands will organise a Volleyball World Championship. However, the country has already welcomed fans from across the globe for the 2015 FIVB Beach Volleyball World Championships, as well as numerous volleyball events over the years, including: the FIVB World League Finals in 1996 and 2000, the Men’s European Volleyball Championship in 1985, 1997 and 2019, the women’s edition in 1985, 1995 and 2015, in addition to various World League, World Grand Prix, VNL and Olympic Qualification tournaments.

This activation forms part of the wider legacy of the tournament to bring long-lasting social and economic benefits to the host countries and regions, while inspiring future generations to engage with volleyball as part of a healthy lifestyle.

As 2022 gets underway, preparations are in full swing with the next milestone for the event, the Drawing of Lots, coming soon.

The 38th FIVB World Congress will also be staged in the Netherlands during the Women’s World Championship.