This summer the eyes of the world will be on 24 of the world’s greatest national men’s volleyball teams as they compete for ultimate glory at the FIVB Volleyball Men’s World Championship 2022 in Russia.

The prestigious event is set to get underway on 26 August 2022, with electrifying volleyball action to take place across 10 host cities, including: Saint Petersburg, Moscow, Kemerovo, Novosibirsk, Ufa, Ekaterinburg, Krasnoyarsk, Kazan, Kaliningrad, and Yaroslavl.

The 24 qualified teams represent the best teams from all corners of the globe, and include reigning World Champions, Poland, Olympic Games Tokyo 2020 champions, France, and last year’s Volleyball Nations League (VNL) victors, Brazil. The Poland men’s national team will no doubt be looking to earn their third World Championship title in a row, having emerged victorious at both the 2014 and 2018 editions. 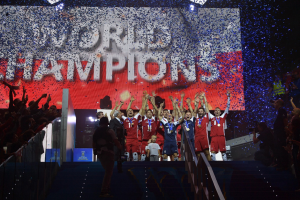 Preparations for the event accelerated last year with various site visits, the celebration of the One Year to Go milestone and, of course, the Drawing of Lots Ceremony. Here, the 24 participating national teams found out in which of the six pools and ten host cities they will play in when their championship journeys get underway. 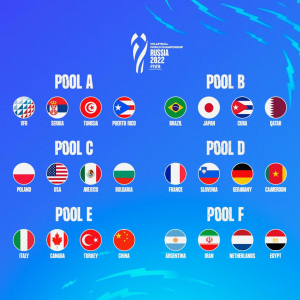 Their journeys became even clearer as just two months later the approved venues for the event were revealed https://en.volleyballworld.com/volleyball/competitions/men-worldchampionship-2022/news/fivb-volleyball-world-championship-2022-results-of-the-year-and-final-approval-o following a number of thorough site visits conducted by the FIVB and Volleyball World teams.

The first official ambassadors of the Men’s World Championship were also announced at the end of 2021, with two-time world champion Ekaterina Gamova and Olympic hero Sergey Tetyukhin set to represent the event. 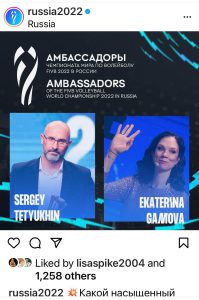 Most recently, the first test match took place on 25-26 December at the Ice Palace in St. Petersburg as part of the Russian Cup Final Four. The incredible event saw Zenit Kazan win the Russian Cup, while also showcasing an electric atmosphere at the venue prior to this year’s World Championship. The Ice Palace will host the opening match of the competition on 26 August with VFR set to take on Tunisia. 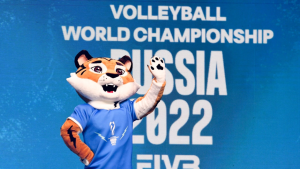 As the clock counts down to the FIVB Volleyball Men’s World Championship 2022, preparations are in full swing for the event now less than eight months away. Many events will take place in the coming months to further popularise volleyball in the country and worldwide, including the Trophy Tour – the journey of the World Championship trophy across Russian cities and regions. During the tour, the trophy will travel twelve and a half thousand kilometres across the territory of Russia, a demonstration of the vast geography of the event.

Promotional activities such as the Trophy Tour will not only serve to build excitement for the event, they will help to bring volleyball to even more people. The energy and momentum from the event will also be harnessed to further the development of volleyball worldwide, from grassroots to the elite levels, in addition to creating a new generation of fans in Russia and beyond.