Volleyball New Zealand has spent the past few months redesigning the programme for under-17 and under-18 teams, which attend the Asian Championships every two years.

Youth players have previously been selected at age 14-15 for a two year campaign leading into the Asian Champs. But Volleyball Development Manager Dave Keelty says they want to take a more holistic approach.

“We want to move away from selecting a smaller, younger group that build over a two year period and are instead proposing to hold a mixture of regional and national camps for a bigger talent pool where we can focus on key areas.”

Designed around three pillars – connection, fun, and continuous improvement – the camps will focus on:
– Skill development and tactical development aligned to international best practice
– Building a foundation in strength and conditioning, nutrition and mental skills
– Creating a more aspirational path towards representing New Zealand at the
senior level by including senior international athletes at each camp.
– Creating a challenging yet safe environment so players get hooked on being
better at volleyball, and want to stay involved at high performance level.

Dave Keelty says by only selecting 12, 14-17-year olds to prepare for the Asian Champs they’ve essentially ruled out the hundreds of other ambitious and talented athletes but who maybe aren’t quite as skilled at the time.

“We’re narrowing our focus too early by selecting these squads, and not allowing those other kids to get more development and grow,” he says. “A lot of the kids selected for those squads have only played volleyball for a year or two, so we’re creating a potentially damaging sense that these kids are New Zealand reps when they are essentially still beginners in the sport.”

Volley Ferns captain Kim Smith, a double international who represented the Black Ferns at the 2006 Rugby World Cup, credits playing a variety of sports throughout high school as being hugely beneficial to her career.

“I didn’t play any New Zealand age group volleyball growing up, and didn’t play against other national teams until I reached the senior level. The changes VNZ has made in the youth programme reflect my experience, that it’s not overly important to represent your country internationally at 16 or 17.”

Smith, who is also co-coach of the New Zealand junior women’s team, believes it’s more important that young athletes are given the chance to develop and grow in a high quality environment.

“The way the programme will be structured, with more athletes and coaches involved, means we can specialise in specific areas like middle hitters, setting, jump serving etc, which are key areas for us to improve on as a country. The coaches will be able to get into the nitty gritty detail with the athletes, elevating their understanding and ultimately their performance.”

It’s also hoped the changes will relieve the financial burden on the athletes and their families. Volleyball is a user pays sport and Keelty says they’re finding a lot of junior reps don’t continue representing New Zealand.

“The change in this program will eliminate cost as a barrier for some athletes who could never afford to save $5,000 to go to Asia, so we’re increasing access for more athletes. We’ve found talented players can end up spending close to $20,000 representing their country by the time they’ve turned 19 or 20, and then can’t afford it anymore.”

The youth programme is the first step on Volleyball New Zealand’s performance pathway and will link closely with the junior (under-19) programme. These stepping- stones give young athletes a goal to strive for within 2-3 years and a pathway towards the senior squads.

To support these changes, the coaching structure will also be tweaked and will help grow a base of performance coaches. A group of coaches will work closely together to develop camp structure, run camps, and provide support to other coaches in attendance, rather than being run by one head coach and manager. 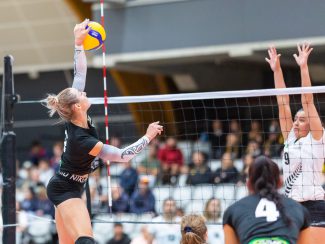