Bangkok, Thailand, May 23, 2021 – The Qatar Volleyball Association recently honored its beach volleyball team and staff after they have qualified for the Tokyo 2020 Olympics.

Cherif Younousse and Ahmed Tijan have already made the cut for the top-flight Olympics beach volleyball competition between July 24 and August 7 in the quadrennial sports extravaganza in Japan following the newly-announced ranking by the International Volleyball Federation (FIVB).

The FIVB mentioned in a statement that 13 teams have guaranteed direct qualification for the 2020 Olympic Games after the end of the last three Olympic qualifying rounds in Mexico. Younousse and Ahmed Tijan came in the seventh position in the FIVB world ranking with 5,280 points, according to the latest FIVB ranking, and in fifth place in the Olympic classification.

The Qataris earlier left the Cancun Hub with gold medals around their necks. Silver medallists in the first two FIVB Beach Volleyball World Tour 4-star events at the Playa Delfines, they climbed another step on the podium as they won the third and final tournament in Mexico with a 2-0 (21-15, 21-12) win against Russians Konstantin Semenov and Ilya Leshukov.

It was the first victory for the Qataris together in a 4-star event and just their second as a team, following their triumph in a 1-star tournament in Doha in February. Cherif and Ahmed have won more medals than any other men’s team in 2021, with two golds and two silvers in five tournaments. 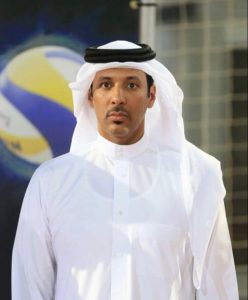