Artacho Del Solar and Clancy took the title in straight sets with a 2-0 (21-11, 21-16) win over Stefanie Fejes and Becchara Palmer.

Competing for the first time after a 14-month hiatus due to injuries and a COVID-forced break in the beach volleyball calendar, Artacho Del Solar and Clancy didn’t drop a single set on their way to the gold medal, winning all of their five matches in the Women’s Division 1.

Despite confessing to a bit of nerves as they stepped onto the court after such an extended hiatus, the top Australian team looked pretty comfortable at Glenelg Beach and their success was never in doubt.

“We’re back! It’s been 14 months that we haven’t competed, so it’s really fun and we are super excited to be playing again,” said Artacho Del Solar.

“It was a total mix of emotions. We are very excited to be back competing and we definitely got nervous, but we love finals! So it was really nice to step back on the court. It’s also really exciting to see so much talent out on the courts,” Clancy said.

Clancy and Artacho Del Solar managed to stay fit and focused during the last few months, even amidst all the uncertainty, but returning to competition was a key milestone as they seek to confirm selection for the next Olympic Games.

“We always have goals and things that we are trying to improve, so we’re just grateful that we were able to come down here and compete. Volleyball Australia has done a great job during COVID, but it’s been really tough, so it’s been really nice to be back out here.” 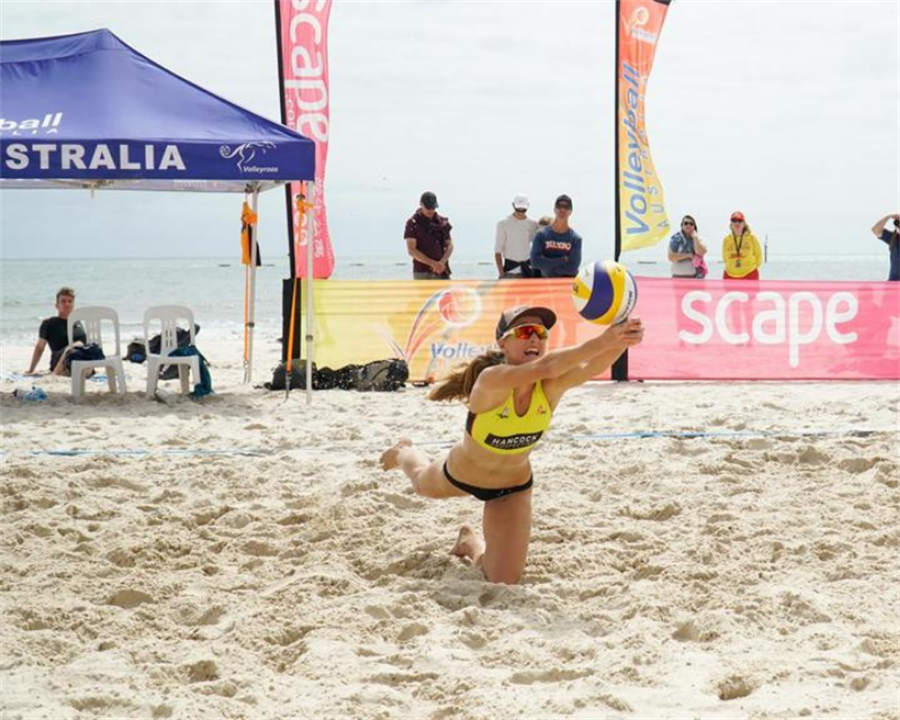 London 2012 Olympian Becchara Palmer and her partner Stefanie Fejes had qualified for the gold medal match after edging Phoebe Bell and Jess Ngauamo in three sets (21-16, 20-22, 15-12) in a hard fought morning semifinal. Bell and Nguamo regrouped and went on to claim the bronze medal later in the day, beating Christie Jenkins and Rebecca Ingram in straight sets (21-17, 21-17).

“We were disappointed after our semifinal this morning, but we had a quick break, regrouped, went out and performed. So, a good end to the day,” Bell said.

She added that the long break in the beach volleyball calendar created some additional challenges to players now trying to get their form and chemistry back.

“The real challenge for us is that we haven’t actually had a lot of competition, so mentally it’s quite hard to stay in the game for the whole time.

“We’re really thankful and grateful to Volleyball Australia and everyone that has made the national tour possible. We really missed competing, so this is awesome,” Bell said.

The third leg of the Australian Beach Volleyball Tour, also valid as Australian National Championships, is scheduled from February 19-21 in Manly, NSW. Tune into SBS on Sunday, February 21 at 2pm local time and 3pm AEDT for the gold medal matches live from Manly.