In one of the most anticipated matches of the Round of 16, the eighth-seeded Australians, who claimed the bronze at the previous World Championship in Hamburg, outspiked the Dutch standouts overcoming Stam’s solid blocking efforts to celebrate with a 2-0 (21-15, 23-21) victory after coming from behind in a hard-fought extended second set. Blocker Clancy put away a match-high 18 points (including an ace and a kill block), while defender Mariafe added another 15 (one ace). 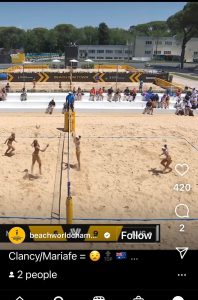 “They are an incredible team and it’s nice to see the new wave of the next generation coming through. It’s nice for us to just keep that good rhythm we’ve kept building with every game. We take it point by point and we just look forward right now, while enjoying this moment,” Clancy told Volleyball World.

“We had so much trust and so much belief, and we knew that if we stuck at it, kept patient and kept applying the pressure, it was going to pay off. I think we did just that, we fought every rally, we used each opportunity and we stayed really aggressive, and it’s what it came down to,” Mariafe added. “We are a team that press to win. We always come to each event to win, but we focus a lot on the processes and each game at a time and that’s what we’ve been doing. Yes, we got bronze in Hamburg and we would love to turn that into gold, but we can’t really focus on the expectations. It’s a journey; we’re also thinking long term and this is another step forward.”

In one of Friday’s quarterfinals, the Aussies will take on Svenja Muller and Cinja Tillmann, whose amazing winning streak that started at the Ostrava Ellite16 continues at Rome 2022. On Thursday, the 16th-seeded Germans claimed their fifth consecutive victory at the World Championship, a 2-1 (19-21, 21-16, 15-11) comeback win over USA’s Terese Cannon and Sarah Sponcil. 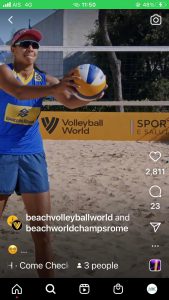 Defending world champions Sarah Pavan and Melissa Humana-Paredes also came back from a set down to edge forward in an extra long tie-breaker to a narrow 2-1 (16-21, 21-11, 18-16) victory over Brazil’s Talita Antunes and Rebecca Silva. Next, the 10th-seeded Canadians will take on another powerful Brazilian pair, second-seeded Eduarda Santos Lisboa (Duda) and Ana Patricia Ramos. Duda and Ana Patricia outpaced their compatriots Barbara Seixas and Carol Solberg, seeded fourth in the bracket and ranked second in the world, on the way to a 2-0 (21-16, 21-17) clean slate in an all-Brazilian duel.

In yet another Round of 16 comeback, 20th-seeded Sophie Bukovec and Brandie Wilkerson knocked out Germany’s Karla Borger and Julia Sude. The Canadians lost the first set, but recovered in the next two to snatch a 2-1 (19-21, 21-19, 15-10) victory. In the quarterfinals, they will go against the last host country pair remaining in contention, 43rd-seeded Marta Menegatti and Valentina Gottardi. Menegatti and Gottardi won the all-Italian clash with Claudia Scampoli and Margherita Bianchin by 2-0 (25-23, 21-15). 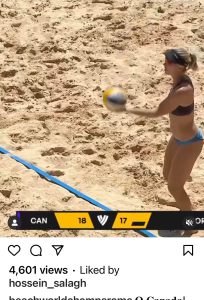 One American team remained standing after the Round of 16, namely Kelley Kolinske and Sara Hughes. The sixth-seeded duo took out Switzerland’s Tanja Huberli and Nina Brunner in straight sets, 2-0 (21-19, 21-9), and will next meet another Swiss duo, Tokyo 2020 bronze medallists Joana Heidrich and Anouk Verge-Depre. 22nd-seeded Heidrich and Verge-Depre also went through their Round of 16 match in straight sets, shutting out third-seeded Latvians Anastasija Kravcenoka and Tina Graudina by 2-0 (24-22, 21-10).