Chetumal, Mexico, November 16, 2019 – They didn’t have an easy path, but Australia’s Taliqua Clancy/Mariafe Artacho and China’s Fan Wang/Xinyi Xia advanced to the gold medal match of the FIVB World Tour event in Chetumal, Mexico. The bronze medal will be contested by the Netherlands’ Sanne Keizer/Madelein Meppelink and Brazil’s Talita Antunes/Taiana Lima.

The Australians are the top-seeded in the tournament while the Chinese are ranked 11th, but they both took a similar route on Saturday, as they came from behind to win both their quarterfinal and semifinals matches in the Mexican coastal city.

Still undefeated in Mexico, the Australians, who are playing in just their second tournament after Artacho had a knee injury during the World Championships, started the day with a  18-21, 21-16, 15-13 win over Americans Kerri Walsh Jennings and Brooke Sweat in a match in which they had to erase a 12-9 deficit in the tie-breaker.

“It’s incredible that we made it to the final,” Artacho commented. “This match was close until the end and I’m glad we managed to win. We’ve been taking this tournament match by match and we’ll try to do the same with the final. Get some rest, prepare well and try to bring our best, so hopefully we can take the gold medal.”

The Australians are guaranteed their 11th World Tour gold medal as a team in just their 21st event together- they have five golds, one silver and four bronze.

Two of their five golds were won against the Chinese, in tournaments played in Sydney, in 2017, and Lucerne, in 2018. Clancy and Artacho have won all four meetings between the teams.

Wang and Xia, who have three World Tour silver medals as a team, came out on top of the all-Asian quarterfinal matchup with Japanese Miki Ishii and Megumi Murakami with a 19-21, 21-19, 16-14 victory.

“It’s amazing that we won another match,” Wang reflected. “Brazil is a great team and we had to play really well on blocking and defense to have a chance. Australia has a really tall blocker, so we’ll need to play well at the net. We know they’re tough, but we’ll try to do our best.” 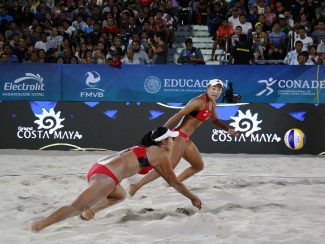 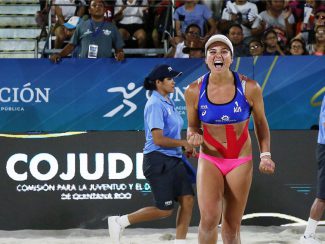