Bangkok, Thailand, March 18, 2021 – The AVC Beach Volleyball Committee met via video conference on Thursday to discuss important topics including confirmation on the staging of the 2021 Continental Cup Semifinals and Finals in secure bubble and methods to calculate ranking points for AVC events.

It was the very first AVC Beach Volleyball Committee Meeting after the AVC’s official announcement of the new composition of its Technical Committees and Council on November 19, 2020 following the AVC Board of Administration’s decision earlier on November 9. Three new members have been added to the AVC Beach Volleyball Committee comprising Mr Kasra Ghafoori from Iran, Ms Debbie Wooster from Vanuatu and Mr Tomoki Kimishima from Japan. 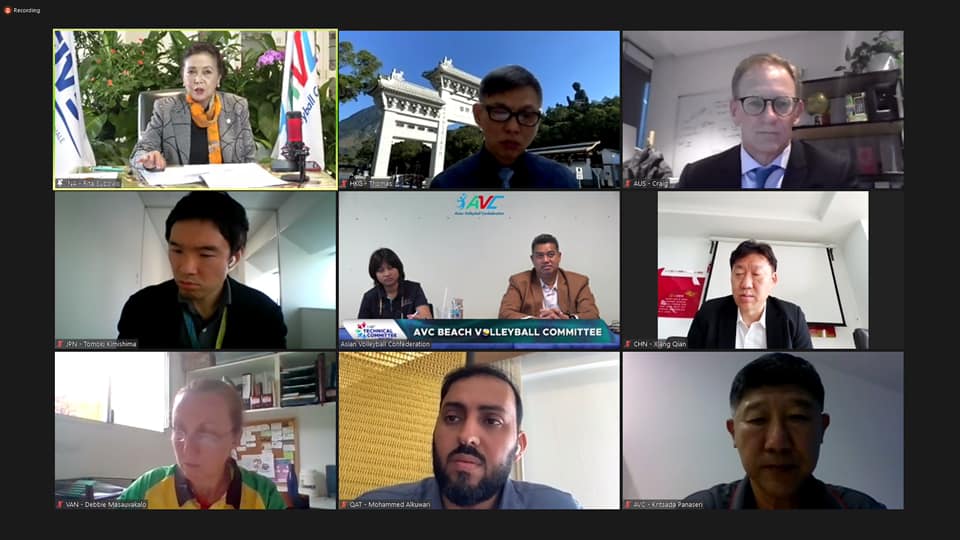 AVC President Mrs Rita Subowo presided over the virtual conferencing. In her welcome speech, Subowo expressed her sincere thanks to all members to share their ideas in this meeting for the best future of AVC Beach Volleyball. With this meeting, she is convinced that everyone can work together. Despite this difficult situation, everyone has been asked to be united and work much harder. However, she is also confident under the leadership of Craig, obstacles and challenges that lie ahead will be definitely overcome.

“Secondly, we have snow volleyball, but we don’t have committee on snow volleyball. In the AVC Sports Events Council Meeting, I had already mentioned this matter on how we can propose to have snow volleyball in the next year’s Winter Olympics in Beijing since it will be held in Asia. This is an opportunity for our National Federations to participate in FIVB snow volleyball events in the near future. Since Mr Craig and I are in the FIVB Board of Administration, we should cooperate on this matter,” the AVC President added.

After that, the meeting acknowledged the 2020 Minutes of AVC Beach Volleyball Committee Meeting, while the general questionnaire to National Federations to host 2021-2024 AVC events has been raised for consideration.

The meeting was also informed that China Government has issued strict precautionary measures to adapt and meet the new health and safety concerns against the COVID-19 epidemic including the 14-day quarantine in a designated hotel for those entering China and so, teams can’t go out for training during the quarantine period.

Learning difficulties and inconvenience caused, China Volleyball Association sent an email to AVC, citing that they are unable to host the 2021 Asian Senior Beach Volleyball Championships. Nonetheless, they confirmed that they will do their utmost to guarantee the preparation and a smooth running of the AVC Beach Volleyball Continental Cup Semifinals and Finals in Xiamen.

As a result, AVC has to find a new host country for the Championships and Craig suggested that the general questionnaire be circulated to all NFs to ask their availability for hosting the 2021 Asian Senior Beach Volleyball Championships in place of China.

The Committee Chairman also thanked Qatar for hosting the World Tour 4-Star Katara Beach Volleyball Cup double gender event in Doha in early March, which also served as an Olympic Games Tokyo 2020 qualification tournament with 400 Olympic ranking points on offer. It was also the first top-tier beach volleyball event to return to the calendar after the outbreak of the global health crisis. 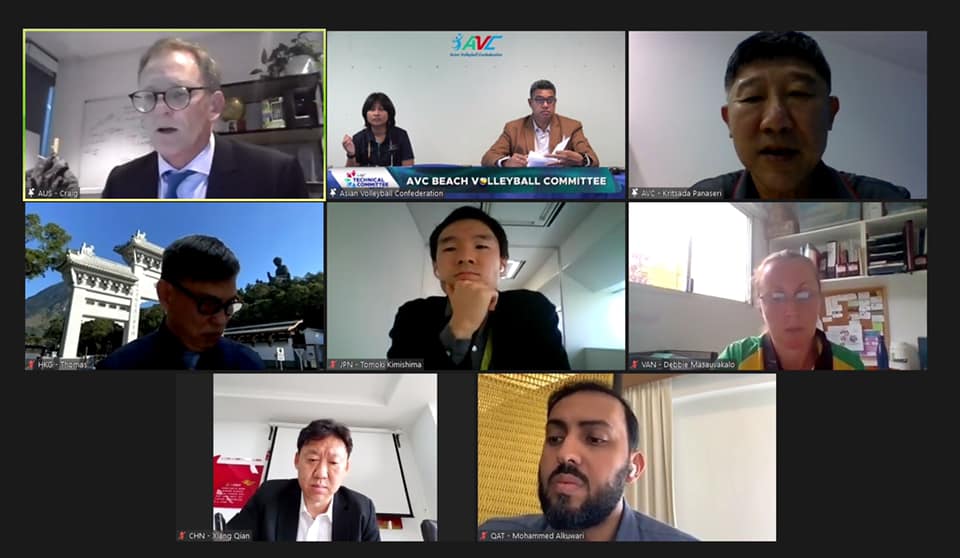 On this occasion, Mr Mohammed Salem Al Kuwari from Qatar spoke of the key to a successful organisation of the Katara Beach Volleyball Cup during the COVID-19 pandemic, citing that event organisers and Qatar Volleyball Association, in close contact with the FIVB, had implemented rigorous health and safety measures to ensure safety and wellbeing of all participants.

Another main topic raised for discussion in the meeting was methods to calculate ranking points for AVC events. Debbie opined that only AVC tournaments from 2019 to 2020 should be counted for ranking points of teams and while a number of Asian teams could not take part in 2021 tournaments caused by the travel difficulties and lockdown restrictions, the 2021 competitions, therefore, should not be taken into consideration for ranking points.

However, positive points of view have been expressed by some other Members on this matter, while Craig said that he will discuss this with FIVB Beach Volleyball Director Mr Yu Cao again.

Regarding the AVC Continental Cup Semifinals and Finals in June, Mr Xiang Qian informed that one big bubble will be used for both tournaments. However, Craig needs CVA to send AVC the updated information about full details of the competition, the quarantine status and the bubble policy in order that participating teams can be well aware and prepared ahead of their departure for participation in the Continental Cup Semifinals and Finals in China.

Qualified teams in the Semifinals and Finals as well as competition format to be applied for use in the top-flight Continental Cup had also been confirmed and raised for further consideration and discussion in the meeting.