Bangkok, Thailand, February 22, 2021 – The local organizing committee for the Doha Beach Volleyball Cup 2021 with a one-star category organized by the Qatar Volleyball Association has implemented preparation policies ahead of the start of the competition from Monday until Friday.

Doha began to welcome teams participating in the tournament including those from Lebanon, Poland, Russia and the USA, as those teams entered the medical bubble allocated at the Ezdan Hotel West Bay, in preparation for the tournament, which has confirmed participation of 26 teams representing 15 countries. The competition will be held between February 22 and 26 on the Al-Gharafa Club beach volleyball courts

The teams received a warm welcome upon their arrival at Hamad International Airport, where the medical swab was conducted in line with the health safety policy to limit the spread of CONVID-19 and then went directly to the residence hotel, where teams entered the “health bubble” until the end of their participation in the World Tour 1-Star event.

The precautionary measures taken by either the Ministry of Public Health or the International Beach Volleyball Federation will be implemented in accordance with the approved medical protocol, including the obligation to wear masks, sterilize the stadium and balls before holding training and matches, in addition to highlighting the application of precaution before entering the stadium, and maintaining social distancing. 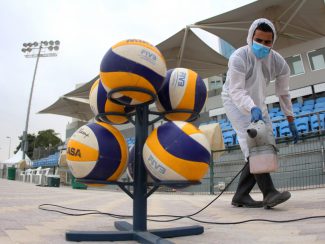