The 21-year-old, who was a member of Iranian club Kalleh Mazandaran over the past five years, penned a contract with Greenyard Maaseik in May but he could not join the team due to the flight restriction caused by coronavirus pandemic.

His countryman Javad Karimi, who has also joined Greenyard Maaseik, has not yet traveled to Belgium due to visa issues.

Esfandiar was in the Iran men’s national volleyball team which captured the tile at the 2019 Asian Senior Men’s Volleyball Championship on home soil.

Greenyard Maaseik will play at the CEV Champions League next season. Karimi and Esfandiar will be the first Iranian players to play in Liga Heren (men’s volleyball in Belgium).

Greenyard Maaseik are a volleyball club from Maaseik, Belgium founded in 1960. They play their home games in the Lotto Dôme Maaseik. 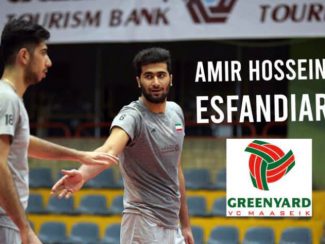