The Bandar Abbas-hosted 2022 Asian Senior Men’s Beach Volleyball Championship in Iran has reached its climax on Thursday when teams qualified for round of 16 will battle it out in the knockout stages to keep Finals hopes alive. Top teams including three Australian pairings navigated their ways to the Thursday’s round of 16. Defending champions and third seeds Christopher McHugh/Paul Burnett, who captured the 2022 Birmingham Commonwealth Games, overcame a shaky start following their stunning 0-2 loss to Japanese Kensuke Shoji/Ikeda Jumpei in their opening clash on Tuesday. The Australian sensation turned things around to defeat Indonesian stars Mohammad Ashfiya/Ade Candra Rachmawan, silver medallists at the 2018 Asian Games on their home soil, 21-19, 21-17 on Wednesday and advance to elimination round of 16 as the Pool C winners. Compatriots and fifth seeds Zachery Schubert/Thomas Hodges, who are chasing dreams of another title after winning three this year including the AVC Beach Tour Samila Open in Thailand in September and the Matsuyama Beach Volleyball Tour in Japan in October, spent only 21 minutes in demolishing Japanese Yoshiumi Hasegawa/Masato Kurasaka 21-13, 21-12 for a perfect sweep in Pool E. Another Australian pairing, fourth seeds Izac Carracher/Mark Nicolaidis, followed suit as the Coolangatta Future Beach Pro Tour winners powered past Omanis Ahmed Alhousni/Haitham Alshereiqi 21-12, 21-19 on Wednesday to secure their place in the round of 16. Apart from Mirzaali/Vakili, the other three Iranian pairings sealed their wins in respective pools on Wednesday. Sina Shokati Shekarsaraei/Abbas Pourasgari, who have yet lost a single set to their respective rivals in Pool H, brushed off Indians Naresh Tumpera/Raju Krishnam 21-11, 21-10 in 32 minutes on Wednesday to make it three in a row for a clean sweep in Pool H. Bahman Salemi/Alireza Aghajanighasab, fresh from 2-0 rout of Hong Kong, China’s Wong Puilam/Lam Kifung the previous day, recovered from the first set down to Surin Jongklang/Banlue Nakprakhong to beat the Thai 7th seeds in three-setter 18-21, 21-19, 15-7 in their last Pool G encounter. Aro Mojtaba/Mahdi Mahfouzi also came back to beat Kazakhstan’s Nurdos Aldash/Kirill Gurin 13-21, 22-20, 15-9 in their last preliminary match. However, with only top two teams from each pool advancing, Iranians Aro/Mahdi, who succumbed to two losses in Pool F, came in third place in the pool to become the only Iranian team to bow out in the first round of the continent’s topflight championship. Another Qatari pairing, Saifeddine Elmajid/Ahmed Mahmoud Essam, failed to make their mark on the final day of the pool plays to go down 17-21, 13-21 to Omanis Mazin Alhashmi/Hood Alialaboubi for two losses in Pool H to miss the cut for the Thursday’s round of 16. Like Qatar, Kazakhstan had mixed fortunes on the final day of the pool plays on Wednesday, with Aldash/Gurin going down to Iranians Aro/Mahdi in Pool F. 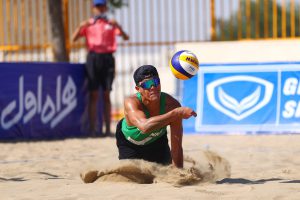 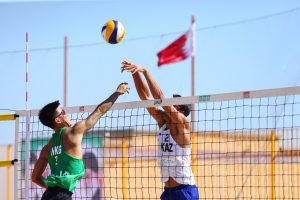 At the completion of the pool plays on Wednesday, Iran’s top seeds Mirzaali/Vakili finished on top of Pool A with 6 points, followed by Qataris Abdallah Nassim/Mohamed Ihab Zaki and Japanese Takahashi/Furata.

Pool B was dominated by Qatari second seeds Cherif/Ahmed, who claimed gold medal at the

In Pool C, Aussies McHugh/Burnett, Indonesians Ashfiya/Candra and Japanese Shoji/Ikeda had 5 points from similar performances of two wins against one loss. However, McHugh and Burnett emerged as the Pool C winners, followed respectively by the Indonesian and the Japanese pairings.

Only top two teams from each pool made the cut for the knockout round of last16, which saw 3 teams each from hosts Iran and Australia, 2 teams apiece from Qatar, China, Kazakhstan and Thailand and one team each from Indonesia and Oman remain in contention for the eventual Asian title.

The drawing of lots for round of 16 was conducted shortly after completion of the pool plays on Wednesday. Match schedule as well as match results and pool standings can be seen at the bottom of the story.